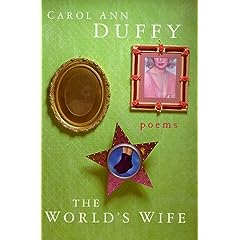 This splendid collection of short poems by Carol Ann Duffy was first published in 1999, so it has only taken me ten years to discover it. Apart from a reference to a Ms M Lewinsky the poems are pretty much timeless. Each poem is written in the voice of a woman, mostly the wife of some famous historical figure – some real, some literary. Women's revenge might be a subtitle for the collection as most poke fun, sometimes light, sometimes bitter, at men and their (mis)rule over women. A lovely example from one of the shortest poems – Mrs Icarus.

I'm not the first or the last

to stand on a hillock,

watching the man she married

prove to the world

Many of the poems express a confident female sexuality, almost machismo at times. These are no downtrodden victims. The beginning of Salome's own tale is a good example of this:

I'd done it before

(and doubtless I'll do it again,

woke up with a head on the pillow beside me – whose? -

what did it matter?

Now and again a tenderness will surface, a recognition that not everything in a relationship was bad. The ending of Mrs Midas – him of the golden touch - expresses this loss of something good and wonderful.

I think of him in certain lights, dawn, late afternoon,

and once a bowl of apples stopped me dead. I miss most,

even now, his hands, his warm hands on my skin, his touch.

This is a enormously enjoyable little book, full of wit, vigour and charm.

Email ThisBlogThis!Share to TwitterShare to FacebookShare to Pinterest
Labels: Poetry