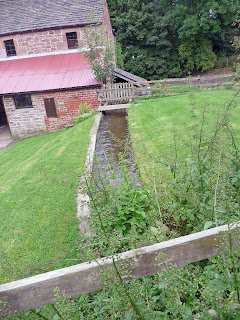 On Sunday we visited The Barry Mill which is only about four miles away. It is one of the very few remaining water powered mills in Scotland and is now run by the National Trust for Scotland. Partly because it is so close by we have always put off visiting the place. Also I have to say it did not seem to be a very interesting site. How wrong can one be.

To a large extent this is due to the fact that we got a guided tour by Peter, a former miller who comes from Leicester and now lives in Barry village. He is a craggy old man with a wide, bushy beard. As a miller by trade, he can work the mill and part of the tour included seeing the machinery in action. He is also a mine of information. In effect you get a social and economic history of rural life in Scotland. Unfortunately I did not get his surname, nor did I take a photo. But we will be back – you can't get too much of a good thing.

The mill building is a three storey affair built of stone, and there has been a mill here since at least 1539 when the mill was the property of the Abbot of Balmerino, which lies across the river Tay in Fife. The present structure seems to date from the early nineteenth century and milling continued until the 1980s. Inside it looks much as it must have looked in the nineteenth century with lots of straw, dust and sacks of corn lying around. 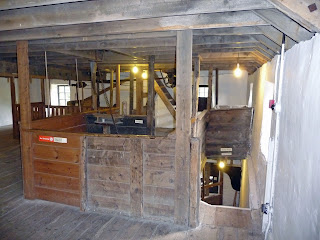 The machinery is powered by an overshot water-wheel made of iron and wood. The wheel is 4.7m in diameter and is fitted with 30 wooden buckets. The water-wheel is enclosed within a lean-to wheel house for protection against winter ice and wind. As a result it is not possible to get a good photo of the whole wheel, but here are some to give you an idea of the contraption. 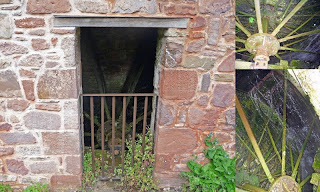 Inside the mill in the lower floor, a pit wheel mounted on the inner part of the water-wheel starts the process of gears and vertical shafts which transfers the water into power for the machinery. 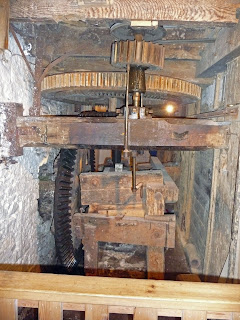 The water-wheel drives two pairs of millstones, both 1.40m in diameter. One is made of monolithic sandstone and is used for shelling the husks from the grain. The other pair are made of French burr stone and agreed to milling the shelled grain into meal. Here is one of the French millstones. 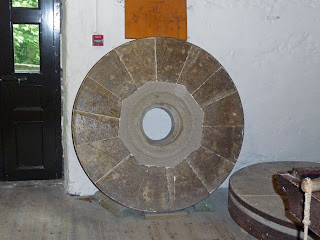 Once on the upper floor the oats were cleaned and shelled and then poured down a hatch to be milled by the millstones. The resulting meal was repacked in the sack and hoisted up to the ground floor again for collection by the owner of the oats. 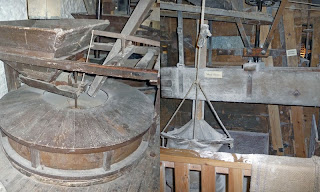 As well as showing us around the mill, Peter was constantly telling us about the traditions and language associated with milling. All the mills were known as cornmills. The corn however changed in different parts of the country. In most of Scotland the corn was oat and the meal produced was oatmeal, which the lady of the house would use to make porridge, various kinds of oatcakes and goodness knows what else. In the north of Scotland the corn was barley, while in most of England the corn was actually wheat. In Scotland the oatcakes would often be quite large and a hungry worker would break off a piece for a snack while out at work. This apparently is the origin of the use of the word piece in Scots as in a jammy piece or a jelly piece, which for thousands of Scots children was a jam sandwich. This use of the word piece is confined to Scotland. In the midlands of England, particularly in and around Staffordshire they also make oatcakes, but these Staffordshire or Potteries oatcakes are made from a mixture of oats, wheat and yeast and the finished product is more like a soft pancake than the traditional hard Scottish oatcake.

While milling, if too many grains were allowed to enter the millstones the stones would eventually grind to a halt, the origin of that common term. In the old days not everyone was paid by corn and those who were not could go to the local corn exchange to buy someone else's surplus corn. In Bristol outside the corn exchange are four brass tables, known as nails. Money for buying corn was placed on these tables, hence the expression to pay on the nail. Peter was full of little gems like these, too many for me to remember – I should have brought a little tape recorder. Still there is always the next time.