Another short visit to Switzerland is coming to an end.  As usual we have managed to pack in lots of outings, some short and some longer.  This little post highlights some of our visits. The main trip this time was to Solothurn, which is known as the Baroque capital of Switzerland.  It is a very impressive small town.  Though we picked a rainy day to visit it was still very pleasant to wander around the place, admiring the lovely buildings.  Below is a view looking up the main street to the very grand Cathedral. 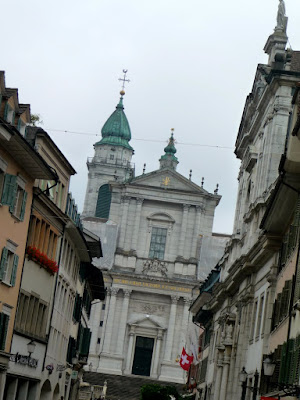 Inside the cathedral was equally impressive.  On display were two beautiful examples of icons.  The one below is of Saints Urs and Victor.  The cathedral is dedicated to Saint Urs. 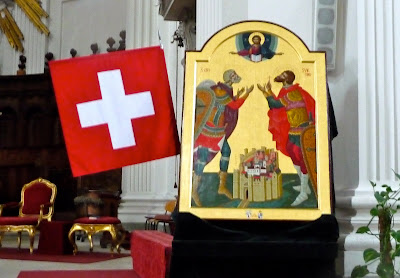 Solothurn is full of beautiful buildings, most of which are richly decorated as can be seen from the photo below, which was taken in the main square. 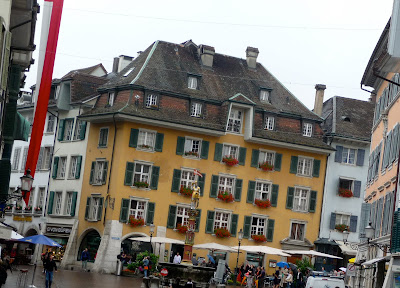 Solothurn is a river town and in good weather you can take a boat trip  along the river.  No boats were sailing when we were there, but the river banks are lined by some fine buildings, such as the old hospital, shown below. 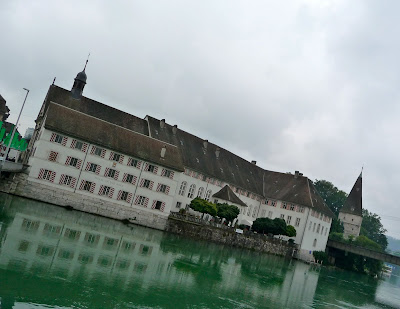 A wonderful feature of Solothurn is the profusion of statues of (presumbly) famous historic characters from the town's past, which adorn the public fountains.  Here is one of the more colourful ones. 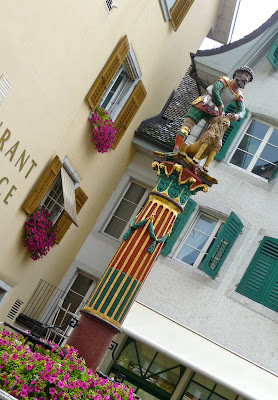 Next up was a short walk by the shore of the Upper Zürichsee.  The walk starts in Pfäffikon and winds its way to the little town of Lachen.  This is one of a series of walks which go all way round the Zürichsee.  Emma hopes to complete the whole lot between now and next year.  An interesting feature of this walk is that it takes place in Kanton Schwyz, one of the original Kantons, and one of the smallest.  The first part of the walk is through Pfäffikon, which is an industrial town and not particularly interesting.  Once past this though the walk becomes more enjoyable and soon you get to the lake shore to find views like this one. 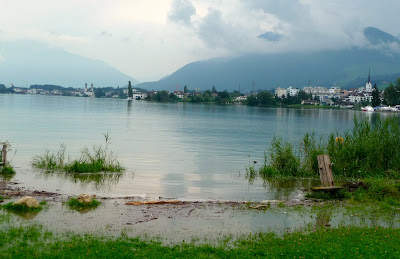 A little further on and you come to the fairy tale hamlet of Seestatt, which consists of not much more than a dozen or so buildings.  All very special and the place reeks of money.  There is a restaurant in the place, but it was in the process of renovation at the time of our visit.  However below is one of the more unusual buildings. 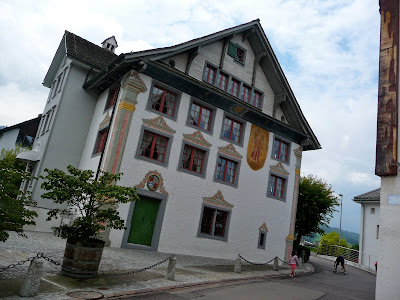 The walk ends in Lachen, a lovely little town near the mouth of the river Aa.  We had a very pleasant lunch there by the waterfront.  The main feature of Lachen is its beautiful twin towered church below. 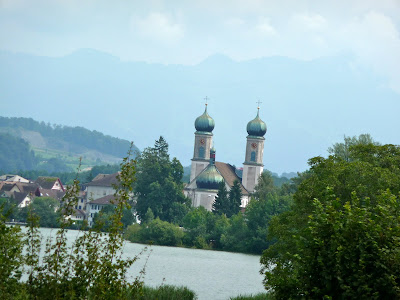 The third outing was specially selected by Emma and was to the Giessbach Waterfall.  On this occasion Cosimo was able to come with us, so we could drive there.  The Giessbach waterfall is in the Berner Oberland, only a short drive up the mountainside from Brienz.  The waterfall is really spectacular and drops down in seven successive falls.  The path that winds its way to the top goes under the water at one stage as can be seen in this photo.

We decided not to pursue the path all the way to the top, but instead wandered down to the hotel and restaurant which lies on a little plateau high above Lake Brienz. 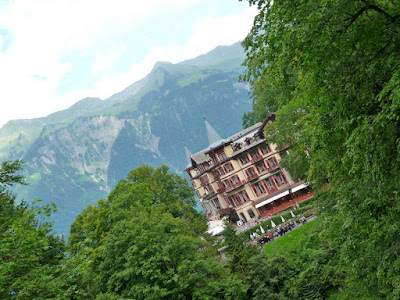 A beautiful hotel which offers good food which we readily accepted.
From here you also get great views up to the whole waterfall rushing down. 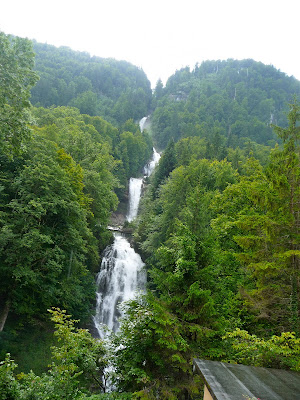 On the way back from Giessbach we passed three, yes three red Ferraris.  Not really into cars myself, but these Ferraris did look very sleek.  The passed us a bit later on and Imanaged to get this photo of all three. 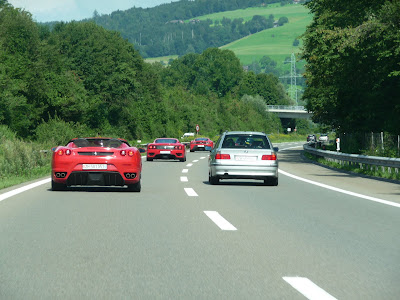 Our final outing was another of Emma's Zürichsee walks.  This one went from Gattikon along the river Sihl and then up and over the hillside to reach the lakeside.  Luckily I found a fine wooden staff to help me up and down the hillsides. 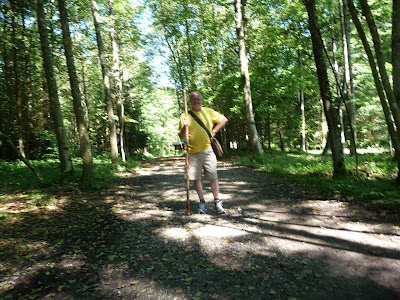 Once through to the lakeside you get wonderful views of the Zürichsee and the mountains beyond as you can see from this photo. 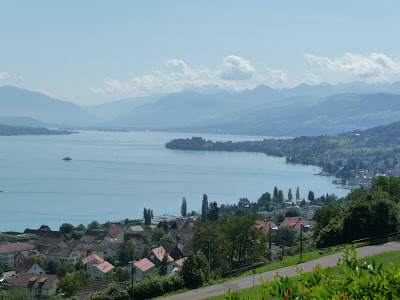 The walk ends in Horgen, one of the main lakeside towns and one end of the car ferry which crosses the lake.  It was a very hot day and we were most relieved to find a fine pizzeria in which to recover after our exertions.  Alessio in particular had been salivating about pizzas from halfway.  Horgen itself is a very fine town with some most attractive traditional buildings such as the one below.  A good place to end our last outing on this trip. 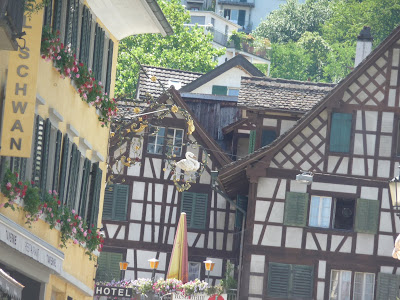