I have been stitching as a hobby for just over two years now.  As I look back on my work I realize that most of my projects are types of Bargello needlework.  Not that I was aware of this at the time.  So what is Bargello?  Below is a typical example of traditional Bargello taken from a tapestry hanging in the National Museum in Zürich. 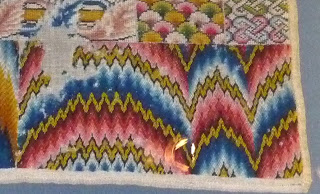 As you can see Bargello is a form of needlework which only uses vertical or horizontal stitches.  The stitches can be of varying lengths, but rarely over more than six meshes.  Each successive stitch or group of stitches goes up or down in a regular pattern of steps, usually just one or two meshes.  This produces an amazing variety of finished designs, from curves, waves to diamonds and ovals.  A key part of Bargello is the use of colour, in particular subtle changes in tones or hues.
The name Bargello comes from the palace of that name in Florence.  The Palazzo Bargello is now a national museum displaying the largest Italian collection of gothic and Renaissance sculptures.  The building itself dates back to the 13th century and in the 16th century the palace became the residence of the Bargello - the head of the police - from which the palace now takes its name.
Its connection with needlework comes from the series of chairs found in the palace which were the first to exhibit this type of pattern on their backs and seats.  Other names continue to be used to describe this work.  Since the first known examples were found in Florence, some people used the term Florentine Work for this type of stitching.  Another name sometimes used is Hungarian Point.  Interestingly this is how Bargello is known in Italy.  This term reflects the belief among Florentines that the technique originated in Hungary.  However English language writers have in the main fixed on the term Bargello.
Bargello was originally worked in wool as it was meant to be used in chair covers or in tapestries.  Since I only stitch for pleasure and not to produce anything particularly usable, most of my work is done using cotton threads.  However I do use wool and funnily enough my very first finished piece of stitching was in effect a Bargello design.  Here it is. 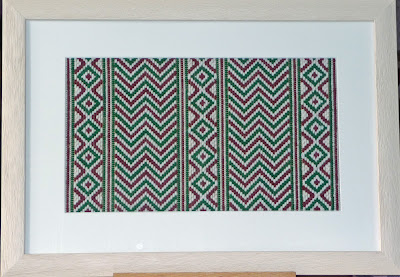 This shows the main characteristics of a Bargello piece - repeating patterns and the use of steps to create the patterns.  It is in fact my recreation of the design of the tiles on the cupola of the Chiesa Madre in Francavilla in Puglia.  This is the hometown of Cosimo’s mother and we had a holiday there in 2008.  One of the many photos I took on this holiday was of the cupola and once home I decided to use it as the basis for a stitching project.
This has become the norm for my projects using wool threads.  I try to turn a tile pattern from the roof of a church or some other building into a design suitable for stitching.  Here are two more examples.  Both come from photos taken in Switzerland This first is based on the very bright and colourful pattern on a church steeple in a village in the Klettgau in Kanton Schaffhausen, and the second is my attempt at recreating the tile pattern on the roof of a barn in Kilchberg. 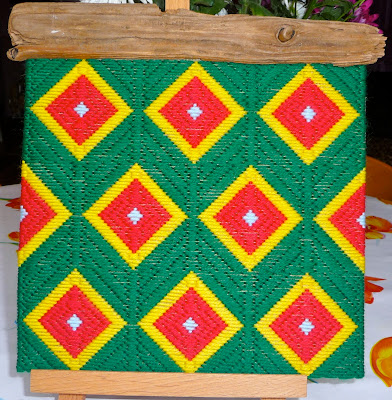 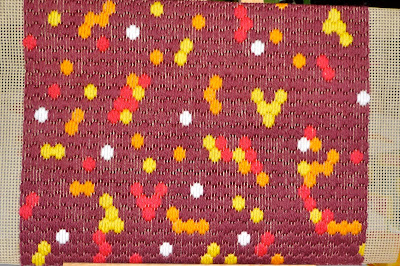 Most of the projects that I have consciously done as Bargello, have been stitched using DMC cotton threads.  Usually on 18 count Aida fabric using two strands of thread.  One of my first pieces was this one, which unusually for me consists of just the one pattern.  It is a good example of how colour is important in highlighting the design. 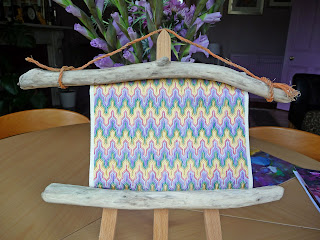 Most of my Bargello projects in cotton thread are compositions which use several different patterns.  This one has four sections and is unusual in its formal regularity and use of a very restricted colour palette.   You can see clearly the contrast between waves and diamonds, hence its title.  This was stitched as a present for Emma for her birthday. 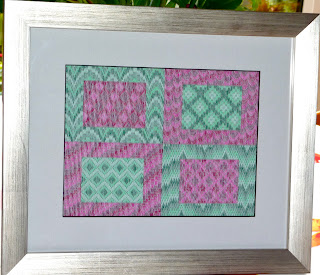 So far the other Bargello projects have been based on five sections, and make up what I call my Five Easy Pieces series.  Each composition has a different arrangement of five sections, as can be seen from the collage below which shows the first four in the series.  They show how a simple unifying feature - five sections - can generate such variety in composition.  They also show how Bargello can accommodate both contrasting colour schemes and monochromatic schemes.  Most of the patterns come from examples in The Bargello Book or Bargello, A Fresh Approach to Florentine Embroidery. 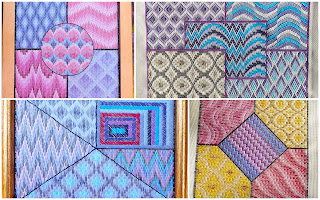 My latest Bargello project was the fifth in this series and the first time I have used silk threads.  I came across some Rajmahal Art Silk Floss in a country craft shop in Angus and bought two to try.  I must say they are the most difficult threads to use.  I find it almost impossible to get them to lie flat on the fabric and to stay in place.  I will need to apply some glue to the back to help fix the threads.  However the colours are very bright and vibrant and I will continue to use them, but only in small doses. 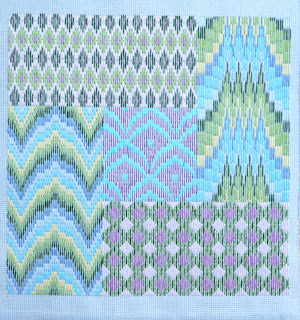 The centre pattern, the one in silk thread, is Italian Brocade, a pattern I found on Bargelloneedlepoint.com, a wonderful online site for Bargello.  The other patterns are all adaptations of patterns in Bargello Magic.  Next up for me is another Bargello design, this time in wool.
Posted by Unknown at 19:25