Palestine - The Struggle for Justice Continues 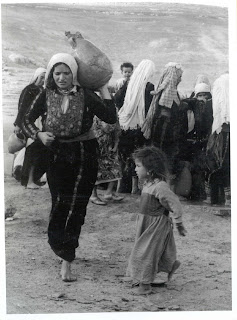 15th May was Al Nakba Day, when Palestinians and their supporters throughout the world remember the”Catastrophe” that befell Palestinians in 1948.  For the founding of the State of Israel in that year came at the intentional expense of the forced expulsion of hundreds of thousands of Palestinians from their homes.  A tragedy that has remain unresolved to this day.   I have written about Al Nakba before and this post is mainly about links to relevant pieces elsewhere that help to explain both Al Nakba and the current state of Israeli - Palestinian relations.
Starting with Al Nakba,  Philip Weiss’ ever interesting site, Mondoweiss has this piece written by the Palestinian Council of Human Rights Organisations.  The title of the article explains the piece perfectly - For Palestinians, the Nakba has been perpetuated for decades.  The following quote succinctly illustrates this ongoing facet of the Nakba.

“While the term Nakba is seen as a reference to the murder, exile and devastation of the 1948 war, in reality, it could just as easily be used to describe the current belligerent occupation. It is an appropriate term for nearly six decades of demolitions, internment, the appropriation of land and the refusal by Israel to recognise and respect the basic human rights of the Palestinian people. It could very easily be used to describe the denial of the right to self-determination of the Palestinian people. The Nakba did not end in 1948. The mass forcible transfer that occurred during and in the aftermath of the war was only the first stage in Isreal’s illegal policy of displacement that is being implemented with equal determination and precision to this day.”
The Israeli newspaper Haaretz has another Palestinian perspective on the Nakba.  This one is written by Dr. Hanan Ashrawi who is a member of the PLO Executive Committee and head of the PLO’s Department of Culture and Information.  Her piece is particularly interesting as she uses this article to demonstrate conclusively that in 1948 Palestine was, “a land with a vibrant society and rich culture.  Palestine was one of the most developed Arab societies, boasting one of the healthiest economies under the British mandate and a high school enrolment rate second only to Lebanon”    Much of the work in rediscovering this history has been researched by Israeli historians as Dr Ashrawi acknowledges.
The third article on the Nakba is by Lisa Goldman, a Canadian journalist who for many years lived in Israel.  Her piece is entitled On the Nakba, Jewish identity and memory.   This is a very moving article in which she tries to confront the Nakba from a Jewish perspective and in particular the memory of the Holocaust.  Her key point is the different way in which the aggressors, the perpetrators of the injustice have reacted.  As she puts herself, “The people who instigated the genocide of the Jews have acknowledged their crimes, asked forgiveness, made restitution payments, outlawed Nazism and made Holocaust studies part of their school curriculum. One can never really apologize for committing genocide, but acknowledgment and accepting responsibility are essential. Otherwise it’s not possible to move on.

Very few Israelis and / or Jews are willing to accept and acknowledge the pain caused the Palestinian people by the Nakba. We deny, deflect, turn away, ignore. We get angry. We accuse those amongst us who wish to remember and record, like Zochrot, of undermining the state of Israel or denying Jews their right to self-determination. Or of being traitors. How can the act of remembering be a betrayal?”

Lisa Goldman’s article appeared in +972 a group blog about Israel and Palestine.  As did the following article by Noam Sheifaz, an Israeli journalist who looks at the difficulties facing those, Israelis and Palestinians who want to challenge the status quo.  He argues that for the vast majority of Israelis the status quo is preferable to all other options.  So talk and arguments about possible political solutions are a waste of time.  The need instead is to focus relentlessly on exposing the reality of the current situation as it affects Palestinians.  As he puts it, “Instead of debating far-away solutions, political energy should be devoted in constant opposition to the military occupation of the West Bank and the isolation of Gaza, and to all forms of segregation and oppression that come with them. In other words, it should be directly aimed at the status quo and all those benefiting from it.”
In this he is supported by another regular writer on Israel and Palestine, Jerry Haber, an orthodox Jewish studies and philosophy professor, who divides his time between Israel and the US.  He runs his own blog - The Magnes Zionist, where this article appeared.  Dismissing the two-state solution as something that was never alive, he comes to the same conclusion as Noam Sheifaz.  Namely that we all need to focus on the current injustices and use all non-violent tactics available to put pressure on Israel.  He puts it thus, “During the very long night ahead of us, the joint struggle of people from Israel/Palestine and from around the globe should continue to focus on civil and political equality, until more come to realize that the problems between the two sides are foundational. Non-violent tactics that exert pressure on both sides, including boycotts and sanctions,  should be considered and adopted if they will further the aforementioned goals.”
I end with another piece from +972 magazine.  This is a review by Yossi Gurvitz, a 40-year old Israeli journalist, blogger and photographer.  In it he reviews the latest book by Shlomo Sand, entitled The Invention of the Land of Israel.  It seems to be a very interesting book and I hope the English translation comes out soon.  According to Yossi Gurvitz, Sands sets out to expose the falsity at the heart of the Zionist project - the notion of the Land of Israel as a physical, geographic place.  A key quote from Gurvitz’s review, “The heart of Sand’s thesis is the intentional confusion in Zionism between the Halachic – Jewish law – concept of Eretz Israel (“The Land of Israel”, EI) and the concept of a place which is under Jewish sovereignty, and yearning for such a place. “Eretz Israel” is, originally, a Talmudic concept – not a biblical one – which delineates it as a territory that imposes extra religious obligations on Jews living in it, which Jews living outside of it are unburdened of. Talmudic legend grants EI various mystical qualities (wisdom, beauty and other nonsense which could only be written by people who haven’t lived here), but does not refer to EI as the “homeland ” of the Jews, and neither does it require them to live in it.
Judaism is of no homeland. It is a religious movement which can exist anywhere, whose last territorial anchors were cut down with the destruction of the Second Temple by the Romans in 70 AD. Were contemporary Judaism what Zionism later made it out to be – a people living in their homeland – it would have suffered a terrible shock. And while many were horrified by the destruction, and while a few haunting mourning poems were written in Greek or Aramaic, Judaism survived the destruction of the Temple amazingly well.”   This is still the case today as Judaism continues to prosper throughout the world and most Jews do not live in Israel and have no intention of ever doing so.
Posted by Unknown at 20:52