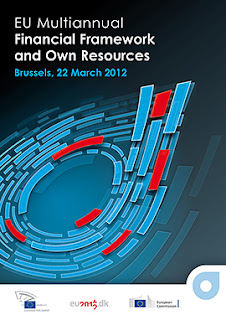 The latest stushie over the budget for the EU is about par for the course.  Remember this is the EU, all 27 member states trying to agree on a budget for the next seven years.  Last time around it took three European Council meetings to reach agreement.  So, failing to reach a consensus at the first attempt is no big deal.  The process of agreeing a budget though does tell us a lot about the strengths and weaknesses of the EU as currently constituted.

Some background first, which may clear some things up a bit.  This is not really a dispute about the budget, which is usually a one year plan.  Rather this debate is about the MFF or the Multiannual Financial Framework.  The Danish government usefully explained what this is, earlier in the year, when Denmark held the rotating Presidency of the Council.  "Since the end of the 1980’s the EU’s annual budgets have been laid down within the framework of multiannual budget agreements – the so-called multiannual financial frames, also abbreviated to MFF (Multiannual Financial Framework).
The frames constitute the expenditure ceilings for the main areas of expenditure determined by the Council, the European Parliament and the Commission for a number of years. The current budget ceilings have been settled for the period 2007-2013, and as the next multiannual financial frames are to be negotiated for 2014-2020, talks are already under way.


The financial framework requires unanimity in the Council of Ministers when it has been approved by a majority in the Parliament."

If you are really keen or sad, and would like to know even more about the MFF you can consult this helpful document provided by the Council.  As can be seen from the Danish outline, the MFF negotiatons involve a lot of institutions and the Danish paper omits one of them, perhaps the most important one of all.  For in addition to the Council; the European Parliament and the Commission, the MFF proposals have first of all to be agreed unanimously by the European Council.  Confused?  Welcome to the byzantine world of the EU.

The two Councils referred to above both represent the governments of the member states in the EU decision making process.  The fact that governments have two bites at the cherry, as it were, says a lot about where the real power lies within the EU.  The Council (full name, the Council of the European Union) is where the day to day decisions about EU policies are taken.  If the issue is to do with finance, then the Finance Ministers of each member state come along and decide what to do, usually by qualified majority voting.  If the issue is agriculture for example, then the Agriculture Ministers would make up the Council.  The Council has a rotating Presidency, lasting six months and the current Presidency is Cyprus.  The website for the Cyprus Presidency is here.  However for the really big issues, such as the overall budget ceiling or the MFF, it is the heads of state or government who meet and decide.  When these august people meet they call themselves the European Council.  You can get their website here.  And it was a meeting of this Council which failed to reach agreement earlier today.

This imbalance of power within the EU can be seen as either a strength or weakness.  As a strength it ensures that the EU in its collective actions and policies is subject to the member states.  There are three weakness with this imbalance though.  Firstly the need for unanimity or even a qualified majority means that decision making can be a very slow and laborious process.  Often so slow that action when it comes can be too little and/or too late to make much real difference.  The power given to the governments of the  member states allows national politicians to indulge in lots of excessive posturing.  The final weakness is that by giving the decisive powers to the governments of the member states there has been no development of a popular EU wide politics.  Everything is approached and seen and reported in the media through a national lens.

This is unlikely to change any time soon.  It is hard to see member states giving up any of the powers they currently have.  So we can expect a lot more posturing and horse trading, all in the name of the well being of the EU as a whole.

Email ThisBlogThis!Share to TwitterShare to FacebookShare to Pinterest
Labels: EU