What is Scottish Labour For? 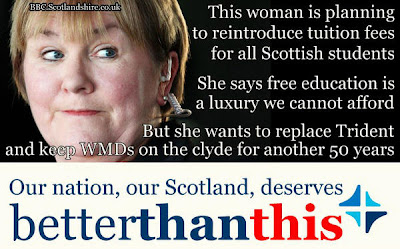 This post is a belated comment on Johann Lamont’s speech in Edinburgh last September.  I have read and reread her speech and still find it very hard to understand what she is trying to say.  In the hope of some clarification I wrote to our local Labour MSP.  We eventually did meet, but there was no meeting of minds.  The main substance of my critique is that Johann Lamont and the Labour Party as a whole are dishonest and defeatist.  In particular Scottish Labour seems to be content for the Scottish Parliament to rely in perpetuity on a block grant from Westminster, with no questions asked.  Thus it follows that Scottish Labour's vision for Scotland amounts to little more than managing a decline in public services.  Scottish Labour seems to have no willingness to challenge the status quo in order  to maintain and if desired increase public services in Scotland.  To my naive surprise the Labour MSP was in complete agreement with her leader.  In fact she stated that accepting whatever the UK government condescends to give us is a price worth paying to stay in the UK.  A Union dividend indeed!  Below is what I wrote at the time on Johann Lamont's speech.


In her speech Johann Lamont makes some very pertinent observations.  For example when she states: “This is the stark choice that Scotland has to face up to: if we wish to continue some policies as they are then they come with a cost which has to be paid for either through increased taxation, direct charges or cuts elsewhere.”  She then goes on to correctly in my view state that: “Once we have decided as a country what kind of public services we aspire to, then we must have an honest debate about affordability.”
Unfortunately the rest of her speech was to ignore completely the issue of affordability.  For this reason I feel she is being dishonest.  She repeats that there will be less money around.  While this is true for the immediate future, it is not the result of some immutable law of nature.  It is the wholly political and ideological choice of our current nasty government in Westminster.  Yet at no stage in her speech does Ms Lamont challenge this situation.  Her whole premise is based on accepting whatever Westminster decides to allocate to Scotland.  We can argue and debate about who gets what, but we must never challenge the amount we get.  This it seems to me is a most defeatist approach.  So in essence I accuse of Johann Lamont of being both dishonest and defeatist.

In her speech Ms Lamont was quite happy to highlight some of the gross inequalities that demean Scotland.  For example she asks: “What is progressive about a chief executive on more than 100,000 a year not paying for his prescriptions, while a pensioner needing care has their care help cut?”  In parliament she continued with this line by exposing how much Nicola Sturgeon and her husband earn.  Now, I agree with Johann Lamont on this.  It is wrong and in my view indefensible that we have people earning £100, 000 and more a year while pensioners need care.  But where I fundamentally disagree is that this iniquity can be solved by means testing or restricting universal benefits.  The answer it seems to me is to increase taxes on high earners like Nicola Sturgeon.  But of course Johann Lamont cannot do that because the Scottish Parliament has no real powers over fiscal matters.  And it is her refusal to contemplate any serious debate about this issue that confirms to me that she is dishonest when it comes to talking about affordability.  She is right that we cannot have a mature debate about what kind of public services we aspire to for our country without including affordability.  But we equally cannot have a mature debate about affordability if we do not have the powers over taxation and the economy in general.
This is not I hasten to add a call for independence, though of course that is one option.  However there is a range of options within the UK for Scotland to be given control over significant areas of taxation to full fiscal autonomy.  But on this Johann Lamont has nary a word to say.  The only tax she mentioned was the Council tax.  Which she apparently wants to increase.  Probably the most regressive and hated tax of all.

Ms Lamont concludes her speech with bit of a rallying call when she claims: “But we can change Scotland now. We have the powers in the Scottish Parliament now, to change radically education, health, public services. What we lack is the will.”  This again is to my mind another example of the basic dishonesty in her whole approach.  Firstly a minor point, there are some radical changes going on in Scotland.  I will mention only one - the Curriculum for Excellence.  Whatever one thinks of this, it is certainly an attempt at radical change.  And one that was initiated under a previous Labour government at Holyrood.  So I find her belittling of what has changed and is changing in Scotland both insulting and surprising.

The more fundamental point of course is that it is manifestly not just the will which is lacking in Scotland.  It is the money.  As she herself admits, there will be less money around.  Yet she makes no suggestion whatsoever as to how we might increase the money available for public services.  Whether it is the UK or Scotland we are talking about very wealthy countries.  To claim that we must content ourselves with whatever Westminster condescends to give us is to my mind both dishonest and defeatist.