With the arrival of December I always feel that winter has begun. This is the month of the winter solstice and this year the shortest day will be on the 21st. The weather has definitely become colder, though so far there has been no hard frost, let alone any snow. Still there is time yet for a white Christmas. Not that snow at Christmas is a regular occurrence over here. Quite the opposite, at least over the last few decades. Snow or not, December is one of my favourite months. The main reason for this of course is that December is the month for Christmas, Hogmany and holidays.

The Christmas holidays was always a much looked forward-to time for me. Any time off school was good, but these were special. Not just Christmas itself, but all the trappings associated with this period. Christmas lights would go up in the main streets in the town. All the shop windows would be brightly lit up with Christmas themes. At home we would decorate the living room with ribbons, and all kinds of paper decorations. A real tree would emerge by the window, ready to be covered in lights and decorative hangings. My mum was very skilled at making her own decorations, especially to put on the table. Moss, cones, holly leaves, cotton wool and ribbon would be quickly assembled into colourful settings. Here is window display from this year in Broughty Ferry. 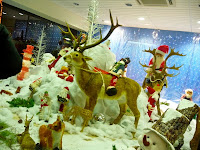 However the most excitement came from playing outside. During the 1950s children were left pretty much alone to play in the local parks and even on the streets. As winters were definitely much colder then, snow was a common occurrence. We would have snowball fights and build snowmen here, there and everywhere. Sledging was another grand sport. Everyone had their own sledge. Mine was a home made effort, constructed by my Dad. We would tow the thing up the nearest hill or slope and push off from the top. With any luck you were still on the sledge when it reached the bottom. As St. Andrews had not then embarked upon its later housing expansion, little hills were easy to get to. Another favourite was ice skating. One of the local parks was commonly known as the Skate park. The main grass area was formed by a slight hollow and every winter this was flooded with water, which would soon turn to ice in the cold weather. Our seasonal outdoor ice rink was tremendously popular with all ages. I loved skating, though I was never particularly good. I usually managed to stay upright, probably because I never tried anything too ambitious or dangerous. I don’t think I’ve ever been skating since those days. Another local pond, known as the Duck pond would also freeze over. This pond was located just outside the town by the Lade Braes, and was originally a reservoir for the nearby water powered mill. As this was a year round pond and quite deep, it was more difficult to freeze over, and was always regarded as a bit of a dangerous place. If it did fully freeze over, it was used for curling.

Christmas Day was naturally the highlight of the season, and I was always very excited by the prospect of lots of toys and other goodies appearing as if by magic on Christmas morning. We followed the traditional custom of hanging socks on the mantelpiece for our gifts. They could only take a few sweets and oranges, the main presents were laid about the room, over chairs and by the Christmas tree. It was like waking up to a magic wonderland. Once I had calmed down a bit the next highlight was the Christmas lunch. In our family the tradition was that we entertained all our relatives on Christmas Day, while my Dad’s brother, uncle Sydney and his family did the honours on New Year’s Day. This meant there was always a bit of an edge to the meals as neither my mother nor aunt Rosie wanted to be outdone by the other. Both meals were in fact very, very good. My mother was an excellent cook, who apparently effortlessly conjured up mouth watering feasts of turkey with all the trimmings and accompaniments, followed by seemingly countless desserts. The piėce de résistance was the Christmas pudding. This was a traditional steamed fruit pudding with several silver sixpenny pieces hidden inside. The pudding was gobbled down as much to find the much prized sliver sixpence as for its nutritional goodness. Drink was not something that our family indulged in. Both my parents were in effect tee-total. Though at festive occasions they were know to sip a little glass of sherry or in Dad’s case a little port. With this we would have some Christmas cake, another of my mother’s specialities. This was a very rich fruit cake, usually soaked in sherry or brandy, which mother had started to prepare in October. The richness of the ingredients meant that this long time was need for the cake to fully mature. After all this indulgence various games would be played - card games, snakes and ladders or monopoly. In later years of course the television came to provide the main source of entertainment. Here are the Rutherfords at one of these long ago Christmasses. 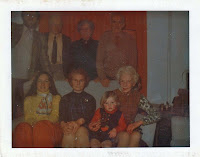 Though this post is about December I feel it has to include the New Year celebrations, as in Scotland the main activities occurred or at least started on the 31st December. Traditionally Hogmanay was the main winter celebration in Scotland. Though our family always made a great thing of Christmas Day, the 25th did not become an official public holiday in Scotland it seems until 1958. Partly due to the religious sensitivities of the dominant protestant churches in Scotland, Christmas Day was regarded as both not a significant Christian day of worship and too much associated with Roman Catholics. Well into the 1970s and 1980s you could still hear or read about some small protestant sect raging against the perfidy of Christmas.

Anyway, after this brief historical digression, to return to Hogmanay. Nobody really knows the origin of the word - old French, Flemish and Norse have been suggested as possibilities - but who cares. Hogmanay is the time for a right good party and is usually associated with dancing, much noise and even more booze. A good traditional Scottish mix. Winter festivals are as old as mankind and the Scottish Hogmanay does seem to have much in common with the Ancient Roman festival of Saturnalia which was apparently a period of unrestrained licence and revelry. Plus ça change and all that. I don’t have many early recollections of Hogmanay. But later on into the 1960s Hogmanay became a big event for our family. Or at least for my parents. One of our neighbours, the Clarke’s, would organise a veritable feast for early in the evening. All their friends and neighbours would come. Though television was now common, the party would still be entertained by impromptu songs by fellow guests. After the bells had brought in the New Year, the party could expect the regular arrival of new guests as one of the main traditions was first footing. It was considered lucky to be the first person to visit a house after the midnight bells. The guest traditionally would bring a lump of coal or cake or salt. A bottle of whisky was an almost obligatory addition. Drinks and good wishes would be exchanged and after a decent while, the first footers would move on to celebrate/raise havoc somewhere else.

These traditions, especially the first footing were very much alive well into the 1970s at least. Kathleen and I would regularly be out and about visiting friends and acquaintances. Nowadays there seems to be much less of this aspect to Hogmanay. Parties are still very common, and most people who go out will go to a party in the house of a friend. The other innovation is the big communal street parties. Most towns have one, but the biggest and most famous is Edinburgh’s. I’m too old and frail to indulge in such riotous enjoyment. In fact Hogmanay is probably the part of winter that I least enjoy. We have rarely found a satisfactory way of celebrating the New Year. Some of our friends go away for this time and bring in the New Year in a hotel either in Scotland or in some warm country. Must say that celebrating Hogmanay in the Bahamas does have its attractions.

For the Rutherford family December is a particularly happy month. One of my great grandmothers, Catherine Rodger was born on Christmas Day in the parish of Carnbee in 1847. She would go on to marry James Rutherford. December is also the month in which my sister, Pat, was married. Her wedding was on Boxing Day, and I can still remember the reception afterwards. Two birthdays in particular make December a special month. My wife, Kathleen was born on 30th December and will soon celebrate her sixtieth birthday. And of course, our first daughter, Emma, was born on 29th December. At that time we were living in Johnstone, a small town outside Glasgow and Emma came into the world in the Maternity Hospital in Paisley. She can therefore claim to be a Paisley Buddie, though I am not sure if she wants this particular accolade. Anyway when she was but six months old we moved to St. Andrews and she grew up there. So she is really a St. Andrean after all. Our first year there was spent in a basement flat right beside the 18th hole of the famous Old Course, and this was where she learned to walk, which she managed to do on her own by the time she was just nine months old. Always on the go is our Emma - right from an early age always keen to be out and about. Some things never change!

Having a birthday so close to Christmas can be a bit of a downer for some. Kathleen has always felt that she missed out on her birthday. Emma on the other hand I think quite liked the idea of two parties and two lots of presents one after the other. You can never get too much of a good thing. Anyway here she is about to plunge into a birthday cake. 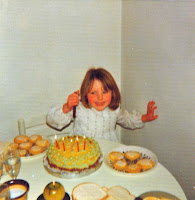 If you want a gemstone for December you are spoiled for choice. If you want something bright and warm, then the ruby can be yours. This is favoured by the Ayurvedic tradition among others and symbolises everlasting love. Most traditions however favour something cooler, either turquoise or the blue topaz. Turquoise is meant to represent prosperity, success, happiness and good fortune, so would seem a good choice. However if you want something which symbolises love and fidelity, then blue topaz is for you.

Less of a choice when it comes to December’s flower. By common consent this is the Narcissus. Any colour may do, but the most usual seems to be the paperwhite narcissus which stands for respect, modesty and faithfulness. A gift of narcissus means that the sender wants you to remain as sweet as you are. How romantic, and as good a way as any to end this post. A happy December to one and all.