This is an attempt at a photo-essay to present an overview of my first impressions of the city shortly after our return from Berlin. We were only there for four nights so only part of the city is covered. I hope to post about some features in more detail later on.
Berlin - an Imperial city
One of the first things that stands out in visiting Berlin is that the central area is one impressive statement of imperial power. The area from the Brandenburg Gate to Alexanderplatz remains a well planned sequence of state buildings. All designed and built to impress - both locals and visiting dignitaries. Here are or were the main seats of power - the Kaiser’s palace, the Chancellory and the Reichstag; religious centres including Berlin Cathedral; the Humbolt University and some outstanding cultural sites including various museums and the State Opera. Much was destroyed during the war, but many have been rebuilt in their original form, which in most cases was in Neo-classical style. All are very impressive and the whole is a series of gigantic public spaces. Nowadays mainly filled by tourists of one kind or another. First up is the red brick Town Hall which is just off Alexanderplatz. 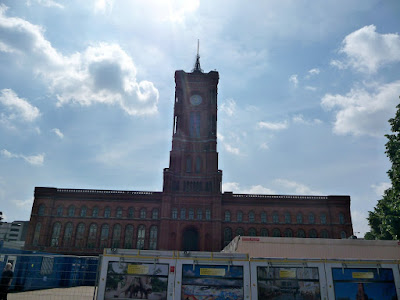 Next is the Berlin Cathedral seen from northern bank of the river Spree. 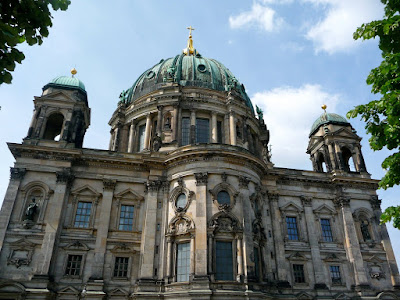 And here is famous front façade of the Reichstag. When we visited the queue to get into the glass dome was so long that we passed on this. 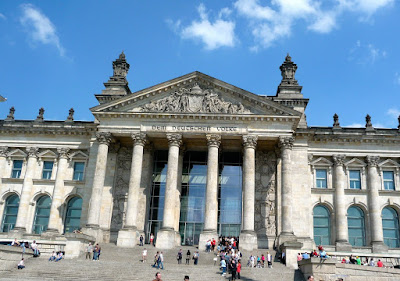 The following is a collage of the buildings surrounding the lovely Gendarmenmarkt. They include the German and French (Huguenot) Cathedrals and the Konzerthaus. 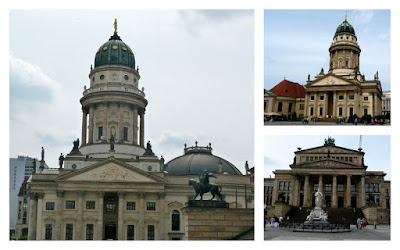 More neo-classical buildings, this time from around Unter den Linden. Clockwise from top left - St Hedwig's (catholic) Cathedral, the Neue Wache (New Guard House) which is now the Central Memorial of the Federal Republic of Germany for the Victims of War and Tyranny, the front of the StaatsOper and the Humbolt University. 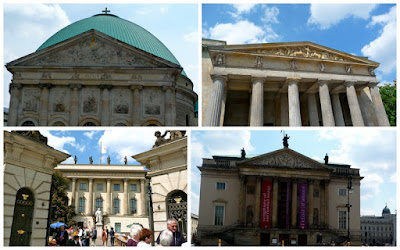 This whole area is framed by two contrasting symbols of Berlin. One is the modern TV tower at Alexanderplatz which lies in the former East Berlin. 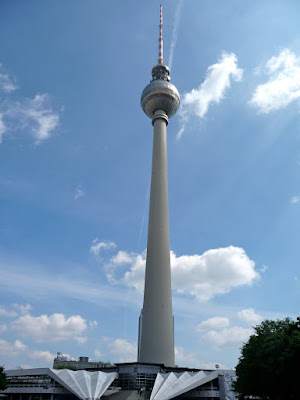 The other end is of course the famous Brandenburg Gate which was originally built in 1791 as a symbol of the rising power of Prussia. It has been restored to its former glory and still stands as an iconic symbol of Berlin. 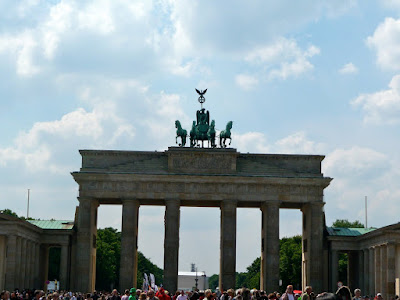 Though originally a symbol of power, this area is now open public space for all kinds of people and when we passed through we were entertained by some wondrous sights. 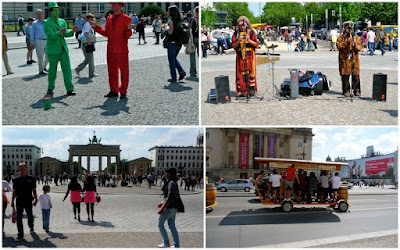 Museums, museums, museums
Berlin is a paradise for lovers of art and culture. There are some 180 or so of them in the city! We managed to sample nine of them. You can buy a three day museum pass which for €19 gets you into 60 museums on three consecutive days. Only one was a disappointment - the Museum for Contemporary Art in the former Hamburger Bahnhof. I guess I just don’t like most of what passes as contemporary art. All the others were really good or outstanding. The ones that stood out, mainly because they show stuff that you can’t see much of elsewhere, included the Berlinische Galerie which has a wonderful collection of modern art by people working in Berlin from 1870s until today. The other very impressive collection is in the Neue Nationalgalerie which currently shows a wonderful collection of German Expressionism.
Currywurst and other delicacies


Neither Berlin nor Germany as a whole is well known for its cuisine. However I was intrigued to try the famous currywurst, which has become a Berlin speciality. It seemed such a strange and almost impertinent concoction. Especially to someone from the UK, where we pride ourselves on our intimate association and knowledge of all things Indian (aka Colonialism). So for an upstart like Berlin to appropriate curry, well - not cricket chaps! Anyway there are currywurst stalls all over the city and I finally managed to sample one on our last day. Below is a photo of what it looks like. 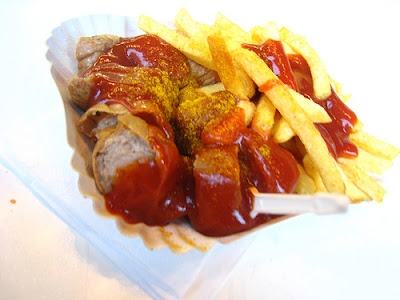 While it was rather tasty, it doesn’t have much to do with curry, at least not as we in the UK would recognise. Pieces of pork sausage generously smothered in tomato ketchup with a light sprinkling of curry powder on top. And that’s all folks! Served with chips as above or a bread roll. If you want to know more about currywurst here is a short BBC film on the subject.
Berlin of course has much more to offer the palate than currywurst and we enjoyed some very tasty meals during our stay. The first thing to say is that, like many international cities, there was not too much in the way of traditional German fare. As it turned out we ate every evening in one of the restaurants on the same street as our hotel - Knesebrechstrasse with Savignyplatz a little way down. And what a rich selection of restaurants in this short space. They included a Syrian, a Jamaican, a French brasserie, at least two Greek, a few Spanish and countless Italian restaurants. We sampled one of the Greek restaurants and two of the Italian. Each one was was very good - both the food and the service. And because we were after all in Berlin we did try one of the German restaurants. A rather special and (slightly) famous one - Die Dicke Wirtin (The Fat Landlady). 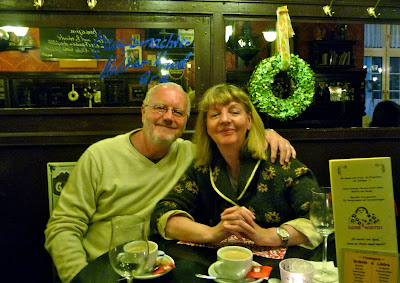 It apparently became well known with students way back in the 1960s and still serves hearty portions of traditional German food. We had something called an onion roast with potatoes followed by apple strudel - both very good. The Fat Landlady was only to be seen in a painting on the wall. The current landlady or waitress is very slim and rather attractive. Here is the original Fat Landlady and her rather Fat Chef. 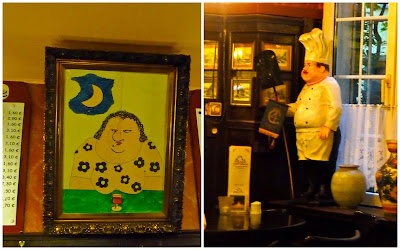 Berlin also has some lovely cafés and we were able to sample a few of them. The pick was probably the Operncafé opposite the StaatsOper. This is a very traditional, almost Viennese establishment with a sunny terrace. The selection of cakes is outstanding - all light and full of cream. I couldn’t resist the one called Schottische Himbeerentorte (gateau with Scottish raspberries), and delicious it was too.
A work in progress


Though much of old Berlin has been restored, there is still so much work going on. There are building sites everywhere - either restoring former glories or adding extensions or putting up something new. The stretch between the end of Unter den Linden and Alexanderplatz is at the moment just one huge building site. Much of it is in fact closed to traffic. Not sure what exactly is going to finally emerge here - not sure the Berliners know either as there seems to be a bit of controversy over what to build and how much it will cost. Bit like the controversy over our own Parliament building in Edinburgh. The following photo gives a glimpse of the present mess around Musem Insel and Alexanderplatz. 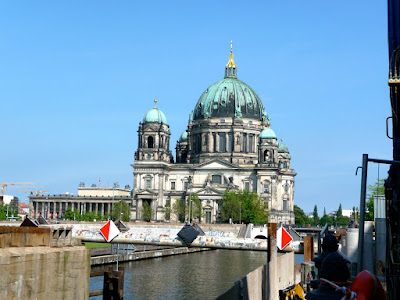 Jewish Berlin
It is difficult to visit Berlin and not be aware of its Jewish past. Not that there is much left of the old Jewish areas of the city. Most of the buildings no longer exist and of course most of the Jewish population was killed. However there are still some remembrances of the Jewish past. The oldest Jewish cemetery was built near Hackescher Markt and nearby there is the Neue Synagoge, which is a now a Jewish cultural centre. And in Prenzlauer Berg there is another Jewish cemetery. Unfortunately both were closed when we passed by. The montage below shows on the right a sculpture outside the oldest Jewish cemetery and below two grave stones. On the left the top photo is the gate to the Jewish cemetery in Prenzlauer Berg and below a view inside. 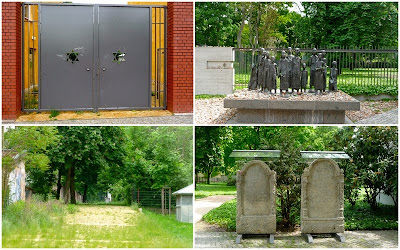 More modern memorials to the Jewish presence in Berlin are the Holocaust Memorial, or to give it its full title - Memorial to the Murdered Jews of Europe. Pretty impressive it is too. A completely abstract construction with over 2700 concrete stelae. 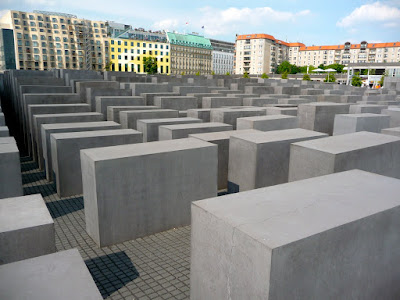 The other memorial is the Jewish Museum which is housed in an unusual building designed by American architect Daniel Liebekind. The building is shaped a bit like the Star of David and contains bizarre angles and voids to symbolize the Holocaust. 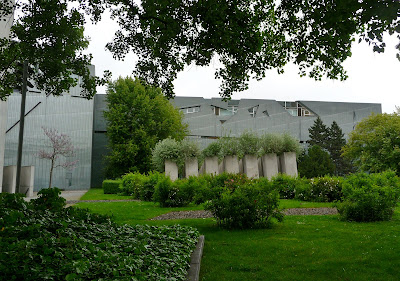 Inside there is a very comprehensive collection of artefacts and images which trace the history of Jews in Germany. It is such a large collection that our two and a half hour visit only allowed us to get a brief overview of the collection. Still even a brief visit gives you a good insight into the lives of Jews in Germany. It is a story of (very) gradual acceptance and integration into mainstream German life, which of course all ended very abruptly and violently with the arrival of the Nazis to power. Despite the horrors of the Holocaust, which are covered, the collection is mainly about explaining and celebrating Jewish culture and life and on the whole gives a positive feel. Though getting into the museum is like getting on an areoplane with electronic checks. And for some reason to get the audioguide which costs an extra €2 you need to supply the staff with some kind of identity item. AlI I had was my EU health card and Kathleen had to hand over the keys to our hotel room. All this for a €2 audio guide!
Posted by Unknown at 11:13