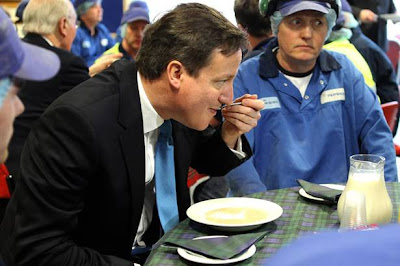 Our Supreme Leader - Prime Minister of the UK - visited Scotland last week in an endeavour to save the Union.  He came and was duly filmed eating some porridge - is there no end to what this guy will do to save the Union?  As regards the speech itself, which you can read in full here, though he kept referring to the future, it was full, some might say overfull with eulogies to our apparently great and glorious past.  When it came to specifying what the benefits the UK will bring to Scotland in the future, he was alas, exceedingly vague, or simply unforthcoming.
Take for example, where he talks about the challenges ahead.  “........ the United Kingdom is actually even more of an inspiring model for the future.  Think of the key challenges of our times.  There’s the risks and opportunities of globalisation - with populations moving, cultures clashing and new routes to prosperity.  And there’s the impact of increasing economic competition from the new, economic power houses of the world.  The United Kingdom has the answers to both.”  Now that is quite a sweeping claim.  The UK not only has answers, but the answers.  Now I have to say, living in the UK, I am not immediately aware of what these answers are.  We are deep in an economic mess, on the border of a recession and the government’s policies seem to be making things worse not better.  This claim that the UK has the answers is also a tad arrogant and may not go down too well elsewhere in the world.  Is Mr Cameron suggesting that Germany does not have the answers?  Or to take another small country like Scotland, is Denmark following the wrong prescriptions for surviving these challenges?  Has Mr Cameron told the Germans and Danes and all the other countries in the world that only the UK has the answers?  It is instructive to note that in his speech Mr Cameron makes no attempt to spell out what these answers are.
In another section of his speech, Mr Cameron seems to have ignored just what independence is all about.  He waxes lyrical about how strong we are in the world - “We have a permanent place on the UN Security Council……real clout in NATO and Europe……and unique influence with key allies all over the world.”  Unfortunately the we here is the UK, not Scotland.  Scotland does not have any seat in the UN, let alone a permanent one, unless we are the foot stool on which others rest their feet.  Whereas with independence Scotland would have its own direct representation in the UN and in the EU and in any other international bodies it wants to join.  Now the UK may be stronger with Scotland, but that just shows how much the UK needs Scotland in order to strut its stuff on the world’s stage.  I don’t want the UK government to decide these things for me.

Much of the media coverage of the speech has of course focussed on his rather cack-handed attempt to offer some kind of carrot to us in Scotland.  He stated that, “When the referendum on independence is over, I am open to looking at how the devolved settlement can be improved further.  And yes, that means considering what further powers could be devolved.  But that must be a question for after the referendum, when Scotland has made its choice about the fundamental question of independence.”  Pray why only when the referendum is over?  There is a Scotland bill currently before parliament in Westminster.  Why not use this bill to legislate now for these further powers?  Presumably because Mr Cameron has no idea of what these further powers might be and clearly has no intention of getting involved in working out what they could be.   This is all too clearly a ploy, reminiscent of the intervention of a previous Tory leader, Alex Douglas Home, who back in 1979 before an earlier referendum on devolution, promised that the Tories would offer Scots something better if they only voted no.  The result, a wait of some twenty years before we finally got devolution.  Either Mr Cameron himself is completely ignorant of recent Scottish history or his speech writers are, or most likely all of them are.  Much better to hark back to the days of the Empire than confront reality.
We are left with what is the core of Mr Cameron’s message.   Just say no to independence and all will be well.  I’m Dave, a jolly good guy - trust me.  I’ve nothing to offer you lot just now, but well if you do the right thing and vote no, well then, who knows what I might condescend to do.  Probably nothing, but trust me anyway - I’m Dave, a jolly nice guy.
Posted by Unknown at 13:21