September has always been one of my favourite months.  The weather is usually still pleasantly warm.  Indeed in recent years September is almost a summer month - no doubt the effects of global warming.  Gardens are full of late summer colour with asters, dahlias, fuchsias and Japanese anemones for example all in full bloom.  However the signs of autumn are there such as the ever darkening evenings, the changing colours of leaves and the appearance of bright red berries on rowan trees.  For September is the month of the Autumn Equinox, which this year will occur early on the morning of 23rd.  Of course for people living in the southern hemisphere, this day will be their Spring Equinox.  For us northerners, make the most of this day, when the hours of day and night are of equal length, for thereafter it is all downhill towards deep midwinter.
To cheer us up a bit there are plenty of things to do in September.  If you have never been to a genuine HIghland Games in Scotland then one of the most famous is held in Braemar in Royal Deeside.  Known as the Braemar Gathering this event has been going on for something like nine hundred years.  The usual attractions will be on display - Highland Dancing, Piping, Tossing the Caber, Putting the Stone, Throwing the Hammer and Tug of War.
For beer lovers Munich is the place to be in September.  Despite its name, the Oktoberfest will start on 17th September, though it does run on into early October.  This year is the 200th anniversary of the festival so expect something extra special.  This will include daily horse races which are included to remind everyone of the origins of the festival - a horserace to celebrate a royal wedding.

Another great city to visit for something special in September is Barcelona.  There you can participate in and enjoy Barcelona’s biggest annual festival - La Mercè.  This is dedicated to Our Lady of Mercy, the main patron saint of the city.  The festival has been on the go for over a hundred years and is very popular with all Barcelonins.
The heart of the festival are the traditional celebrations of Catalan culture:  the sardana, a communal dance;  the castellers - the human castle builders;  the street parades and the exciting correfoc or fire run with the dragons and devils spitting out fireworks.  Here is a video showing highlights from previous years.  Barcelona likes to celebrate not just its Catalan heritage, but its tradition as an open city which welcomes people from all over the world.  To this end La Mercè includes a programme of events which celebrate the culture and traditions of a guest city.  This year Dakar, the capital of Senegal will add its own colour and joie de vivre to the festivities.
September is also a pretty important month this for those of a religious persuasion.  Ramadan, which started in August, comes to an end on 9th of the month and is followed by Eid-ul-Fitr.  This celebrates the breaking of the month of fasting.  Eid-ul-Fitr is a joyous time, but its underlying purpose is to praise God and give thanks to him. It is also a time when old wrongs are forgiven and money is given to the poor.
This year September is also the most important month in the Jewish year.  Three key religious celebrations take place this month.  It all starts on 9th with Rosh Hashannah, also known as the Jewish New Year.  This is also the start of the 10 Days of Repentence, when you say sorry to God for all the bad things done in the past year.  It all comes to a conclusion on Yom Kippur, which falls on the 18th this year.  Also known as the Day of Atonement, this is the holiest day of the year for religious Jews.

For Hindus September is the month for celebrating Ganesh Chaturthi.  This is the birthday of Lord Ganesha, son of Shiva and Parvati, the God of wisdom.  On this day, 11th September this year, Ganesha bestows his blessings on his devotees.  It is celebrated with devotional songs, dances and processions.
My branch of the Rutherford family has three events to remember in September.  The first was the marriage of Alexander Philp and Elilzabeth Robertson.  This took place on 15th September 1879 in St. Andrews.  Their daughter LIly Philps was my paternal grandmother.  My aunt Betty was named after her grandmother, Elizabeth Robertson.  The second was the birth of my maternal grandfather, James Davidson Henderson who was born on 23rd September 1882.  Alas, he died long before I was born.  The third event to remember is the birth of the youngest of my grandchildren.  Alessio Cameron Turi was born on 3rd September 2006 in Kilchberg, Kanton Zürich, Switzerland.  So a very happy birthday to Alessio.  Below you can see Alessio blowing out the candle on his birthday cake. 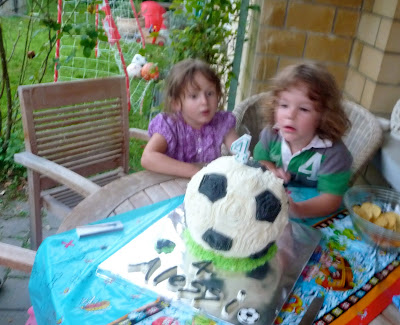 The modern and traditional birthstone for September is Sapphire.  This stone symbolizes truth, sincerity and constancy.  The metaphysical properties associated with sapphire are clairvoyance, insight and interpretations.  Deep blue is the colour most favoured as a birthstone.  The one below is star of Bombay sapphire.

Asters are the birth flower for September.  This is a lovely flower which is usually in full bloom in September.  Blues and purples are the most popular.  In Greek mythology asters were created from tears from Astraea, the goddess of innocence.  The flower represents daintiness, love and magic.  To give someone a bouquet of Asters means that you feel that person has cast a magic spell of love on you.  So here’s hoping September brings us all a little bit of magic.
Posted by Unknown at 11:40