More Bargello and a Lavender Cube

I have been quite busy stitching recently, though I have only managed to complete two pieces.  However one of these was the largest project I have worked on so far.  This was a mini tapestry piece, stitched in wool on Penelope canvas.  Here is the whole thing. 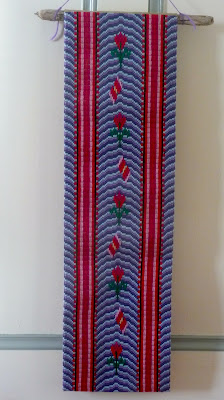 It measures 74cm by 21.5cm and is another Bargello design.  The original design comes from the wonderful book Bargello Magic, How to design your own, by Pauline Fischer and Anabel Lasker.  It was published in 1972 and I have a second hand version from the fourth printing in 1973.  I have already used a few of the designs and this time the starting point was a design called Austrian Plissé.  Quite why they named it this, I do not know.  Plissé apparently means pleats and is common in women’s dresses and curtains.  However I would have thought that the flower and butterfly motifs in the centre panel are the key focus of the design.  No matter, I loved the pattern and wanted to try and stitch something long and not too wide.  For a more detailed look at the pattern here is a close up photo. 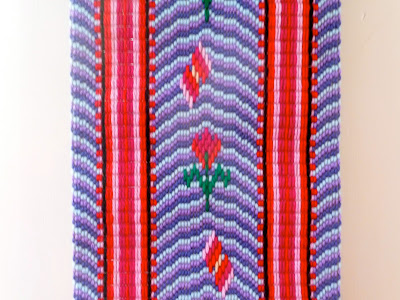 As you can see I used pretty bright contrasting colours.  In the book the background uses more delicate colours and the side panels are more rose than red.  I chose these colours in part because I do like bright colours and also in a more practical vein, they were what were in my thread box.  I now need to finish the whole thing off.  I need to get some backing onto the fabric and will try and attach the piece to bits from my driftwood collection.
My latest completed project was a little cube which I made using six little designs from Louison.  The six make up a series of 30 pt grilles - Série No 2 and and intended to be used to make biscornus.  Louison runs a great site for anyone interested in biscornus.   Here are the six completed squares. 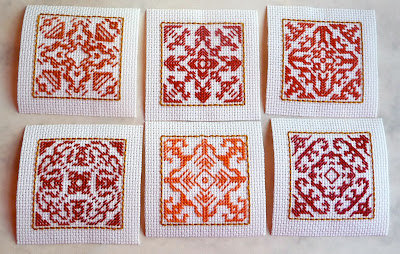 The fabric is 18 ct  white Aida and the threads are DMC cotton.  For this I tried out some new colours I had just bought.  Four are shades of copper along with a medium mahogany and a very dark terra cotta.  A bit different from the bright colours of the mini tapestry above.  Here are a couple of views of the finished cube. 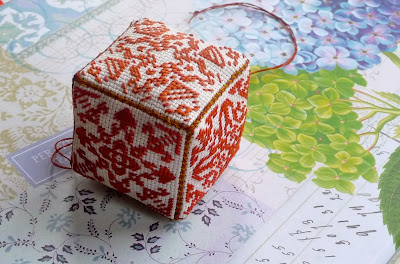 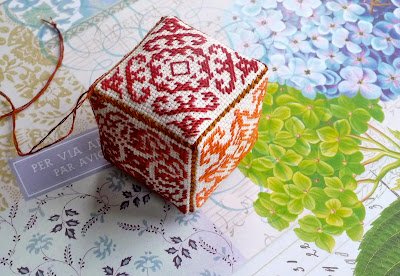 Though designed to make biscornus these little squares can be used for a variety of other objects.  I first came across the idea of making a cube from Valerie, another French stitcher who sent in some photos of her cubes to Louison’s site.  A delightful idea.  A cube is also slightly easier to sew into shape than a biscornu.  I stuffed mine with hollowfill fibre and added some dried lavender.
In addition to stitching I now have a new project to look forward to.  I will be participating in my very first SAL.  This stands for Stitch-A-Long and usually involves a group of people all following the same pattern at more or less the same time.  SALs seem to be an American invention, though they are very popular in France, where they just use the English abbreviation.  Anyway,  another French stitching blog Les Loisirs de LN, has proposed a rather different SAL.  The key to this SAL is that you don’t need to follow any pattern at all.  The lovely idea is to keep all the little bits of thread that you normally just throw away, or leave lying around, as in my case.  You then put these bits of thread into a glass or other see through container - bottle or whatever.  The SAL starts on January 1st and lasts all year.  Each month you send in a photo of your growing montage of threads.  I liked the idea so much that not only did I sign up but started a mini collection for December.  Here is what the bottle looks like so far. 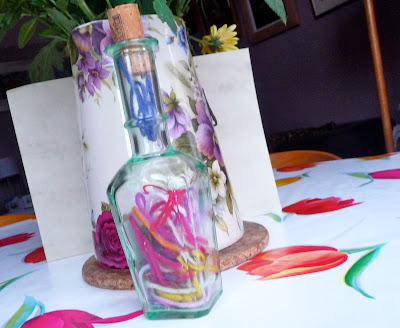 I came across this SAL via Rosali, a Mexican stitcher who runs her own lovely blog.  She had signed up for the SAL and was promoting it on her blog  - gracias Rosali.  If you are interested you can join right up till 31st December.  So good stitching and good thread collecting.
Posted by Unknown at 20:04