More Bargello and a Biscornu

After a brief hiatus over Christmas and New Year I have returned with renewed vigour and excitement to stitching.  So far in January I have completed two pieces and am well on the way with a third.  Not forgetting my collection of thread cut-offs.
My first project was another piece from the book, Bargello Magic, by Pauline Fischer and Anabel Lasker.  In the book they entitle the piece Rose Window.  The pattern is however a variation of the traditional Pomegranate form.  This particular variation is also known as Peacock Eye.  I prefer this title to Rose Window.  Anyway here is the finished work. 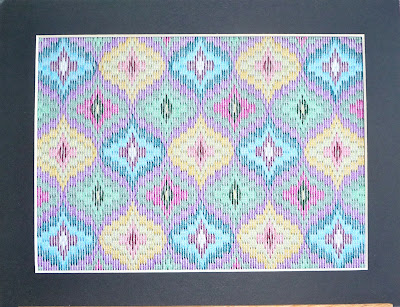 I chose this pattern as it allowed me to use a mixture of vibrant and lively colours.  Unlike most Bargello patterns which tend to use a range of colours of the same shade or tone.   The piece was stitched on an 18ct Aida fabric in grey.  The threads are all DMC cotton and I used two threads for the work.  I’ve attached the finished piece to a black cardboard frame which I picked up somewhere.  The black surround helps accentuate the bright colours.
For my next piece I returned once again to a biscornu.  This was No. 92, a 40 pt biscornu, another design by Louison.  She has a seemingly endless talent for creating biscornus.  This one was stitched on a blue 18ct Aida fabric.  I used two strands of Brise Marine - one of the beautiful threads from Les Fils du Rhin.  The outer stitching was done in medium Delft Blue from DMC.  As with most of the biscornus this one was stuffed with lavander. 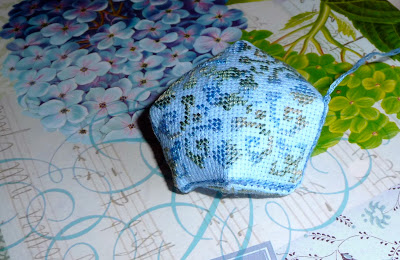 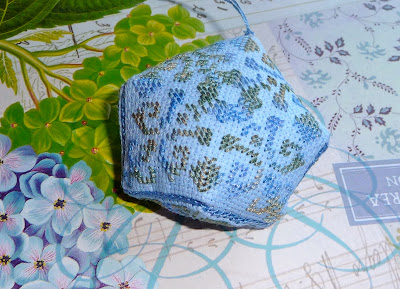 My current project is a bit of an experiment.  This will be my first attempt at creative embroidery.  Though it is not really all that creative.  Anyway the idea is to cut out a couple of sections from the fabric and fill these with some other material.  In this case it will probably be cut out bits from some paintwork on paper.  The pieces come from my grandsons, Liam and Jamie.  This is what it looks like at the moment. 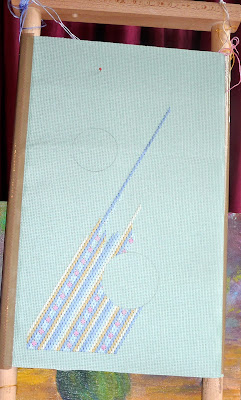 The fabric is once again 18ct Aida.   The background is another design from Bargello Magic - French Ribbon.  You can probably just make out the two circles which will be cut out once the overall pattern is finished.
The New Year has also brought me a whole new stack of fabrics.  This year I decided to branch out a bit, colour wise.  So I have added celedon green, primrose and a bright Christmas red to my usual range of Aida cloths.  For work in wool I now have a white interlock canvas to go with my usual antique penelope canvas.  I have never used interlock before, so that will be another experiment to look forward to. 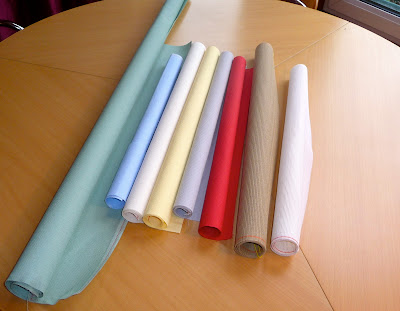 Finally an update on my thread in a bottle collection.  This is my entry into the SAL Poussière de fils, sponsored by Les Loisirs de LN.  Here is my collection after three weeks stitching.  A long way to go - but happy stitching to one and all. 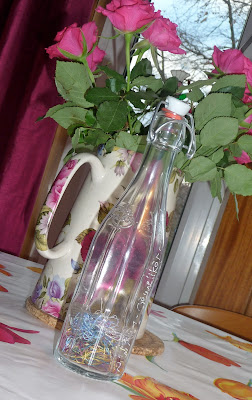