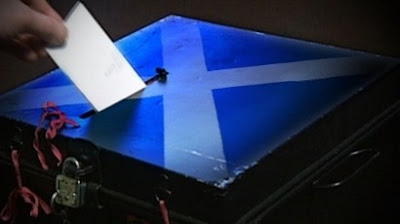 A flurry of recent polling on independence has some mixed messages for supporters of an independent Scotland. Though on the whole the omens are looking good.  For details of the polls and a breakdown of the findings, LallandsPeatWorrier has some very good posts.
The first figure to hit the headlines was that a tiny majority now favour the SNP`s proposal that the Scottish Government negotiate a settlement with the Government of the UK so that Scotland becomes an independent state.  The results were as follows:
Agree                      39% (up 2%)
Disagree                  38% (down 7%)
Don`t know              23% (up 5%)
The other figures to come out show how people currently stand when given two options.  In this case the results for independence were as follows:
Agree                      35%
Disagree                  58%
Don`t know               7%
The other option was what is sometimes described as  Maximum Devolution or DevoMax.  This is to extend the powers of the Scottish Parliament to include more laws and duties and all tax-raising powers, while Scotland remains part of the UK.
Agree                      66%
Disagree                  26%
Don`t know               8%
What is most noticeable about the results is the incredibly strong support for DevoMax.  This is clearly where most Scots are at the moment.  However, and this cannot be emphasized enough, there is no political party that is actively in favour of DevoMax.  While the SNP would welcome this as a further step towards full independence, the UK parties are all dead set against anything remotely resembling DevoMax.  So at some stage Scots voters will have to make a straight choice between the status quo and independence.
While the figures are far from a ringing endorsement of independence they do show two clear trends.  One is that less and less Scots are frightened by the idea of independence.  While not yet convinced, the majority is no longer dead set against.  Secondly support for independence is growing, though still slowly.
All this of course is against a background of little activity by the SNP government.  The usual Al-Megrahi stories re-emerged attempting to discredit Scotland.   Meanwhile the Unionist parties and their lackeys in the media led a barrage of counter attacks against independence.  Despite their claim to offer some positive reasons for maintaining the Union, it all came down to scaremongering and claiming that Scotland is just too poor to be independent.  Plus ça change, plus c’est la mème chose!
Once the SNP and the other pro-independence groups start advocating the positive attractions of independence, then things will begin to get really interesting.  As Wee Wendy memorably said – bring it on!
Posted by Unknown at 19:27