The Euro - One of Two Unthinkable Things Will Happen 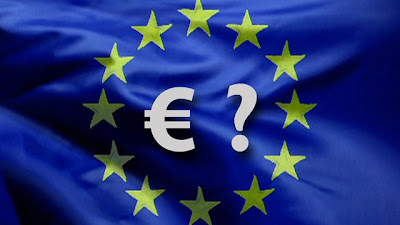 It looks like things are going to get even more interesting for the Euro.  The uncertain outcome of the forthcoming general election in Greece has captured most of the attention, but it is events in Spain that are most likely to provide the tipping point  An exit of Greece from the Eurozone while very messy and of uncertain consequences for Greece, would not in itself prove fatal to the Euro.  Damaging yes, possibly very damaging but nevertheless containable.  This, on the economic and political assumption of "all other things being equal".  Which of course is manifestly not the case.  By all accounts Spain is in very serious trouble, with an enormous amount of money needed to clean out its banks.  Where will this money come from?  Even if the money is forthcoming, what effect if any will this have on Spain's disastrous economy?  Massive and rising unemployment and further austerity measures do not add up to much in the way of growth.  On the contrary further contraction is predicted and pretty much inevitable.

Faced with this situation the key question is can the Spanish government continue with its austerity policy?  Could any Spanish government?  While a Greek exit from the Euro would be unfortunate and unwanted - from a Eurozone perspective - a Spanish exit would more or less bring down the whole ship.  Neither Italy nor France could survive in the Euro faced with a massive Spanish devaluation - which is what would happen if Spain leaves the Euro.  The competition would be too severe.  A Spanish exit and devaluation would not be good new for German exporters either, while a collapse of the Euro is likely to be catastrophic for Germany.

Which is why the way forward is likely to involve either of two currently unthinkable outcomes.  Unthinkable that is to the members of the Eurozone.  The two "unthinkables" are 1.  the Euro is allowed to collapse or 2.  Germany accepts lots of debt relief, inflation and monetary transfers to other Eurozone states.  Neither is on the horizon at the moment, but things in the real economy can move at lightning speed.  The phrase about one of two unthinkables happening is from Paul Krugman.  He used it during a very interesting Newsnight programme on BBC2.  The whole programme is well worth watching.  You can access it here via the BBC iplayer.  The programme starts with the situation in Greece and the Krugman section starts at the 20.00 minute mark.  He discusses the options with another US economist, Ken Rogoff and despite their different perspectives, both agree that the only way for the Euro to survive is for Germany to bear a lot of pain.  Rogoff's view is that this will come anyway and it is up to Germany to decide which poison to take.  His prescription is pretty much identical with Krugman's second "unthinkable" - default on loans owed to German banks, higher inflation and financial transfers.  Some combination of all three is probably the optimum solution.  Certainly higher inflation in Germany seems to be the key to any survival of the Euro.  As Krugman points out, it is easier - both practically and politically - to improve Spanish competitiveness by raising the wages of German workers than by lowering the wages of Spanish workers.

The jury is out as to which of the two "unthinkables" will prevail.  The EU leaders will try to postpone any decision for as long as possible, but of course the financial markets may decide to take matters out of their hands and force the issue.  Look out for further signs of capital flight from Spanish banks.  The Newsnight programme also includes a wonderful section - starts at 31.36 minutes - in which Krugman single handed as it were demolishes the so-called arguments of two Neanderthals from the austerity and more austerity camp.  One of them, Andrea Ledson is even a Tory MP - Lord help us!