Why pick on Syria? - Why not Israel? 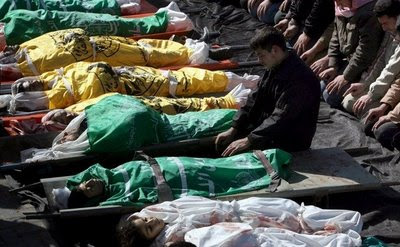 I am somewhat amazed at the rather skewed media and political attention that is devoted to the situation in Syria.  The uprising and the bloody response of the government has caused great suffering among many Syrians.  Most of them civilians and some of them children.  However bad the situation is for some Syrians, I am not sure how western intervention will lessen the violence and the bloodshed.  Whether it is direct military intervention or supplying arms to the rebels, the result can only be even more deaths and serious injuries.  However my main concern here is the double standards that are once again on display, both by our media and our western governments.
However bad and appalling the violence is in Syria over the recent months it pales into insignificance compared with the violence inflicted on Palestinians by Israelis.  This week alone the Palestinian Centre for Human Rights reported 3 killed, 23 wounded, including 8 children, by Israeli troops.  Their report can be found here.  Other reports highlighted that Jewish settlers were on the rampage throughout the West Bank.

These were not of course isolated incidents.  Israel has been killing Palestinians for over 60 years now.  It was only three years ago that Israel unleashed Cast Lead, their massive murderous onslaught against defenceless Palestinians in Gaza.  This resulted in the deaths of over 1,400 Palestinians, including more than 300 children.  Yet what was the thunderous response of the western governments to this slaughter of the innocents?  Understanding of Israel’s right to defend itself - against civilians?  Regret at the deaths and nothing more.  No condemnation and no referral to the UN.  And absolutely nothing about military intervention to protect the hundreds of dying children.  Nor any chance of arming the Palestinians so they could better resist Israeli attacks.  In this of course our wonderful investigative media was largely silent if not outright supportive of Israel.
The lessons of this seems to be crystal clear.  The outrage against the deaths and sufferings of the innocent Syrians is permitted because the western governments don’t like the Assad regime in Syria.  When the Kuwaiti government was killing its own citizens there was very little condemnation from the western governments.  No surprise to learn that Kuwait is one of the West’s best friends in the Middle East.  And of course Israel can kill as many Palestinians as it can manage with nary a word uttered against.  Just to give a fuller picture of the violence committed by Israelis against Palestinians, here are the figures for the number of children killed since September 29, 2000.  The figures come from If Americans Knew.

Israeli children killed - 124
Palestinian children killed - 1,452
If there was any sense of justice within our western world, then it would be Israel that was in the dock for crimes against humanity.  But which of our brave politicians in the west is going to challenge Israel?
Posted by Unknown at 16:04