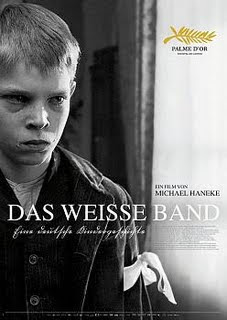 The White Ribbon is the latest film by Austrian director Michael Haneke. It is set somewhere in rural northern Germany in the year before the outbreak of the First World War. Ostensibly the film is about the strange and malicious happenings that occur during that year - the local doctor is thrown from his horse, a woman worker dies in the sawmill, the Baron’s son is abducted and beaten, a boy with Down’s syndrome is attacked and almost blinded. Are these and other happenings just accidents or there is something more disturbing afoot? The film starts as if it might be a who done it mystery. And towards the end it almost builds up to a mystery solving exposé. But nothing is really revealed, for these happenings are merely the fixed points in what is essentially a study of an inward-looking and repressed community.

Our view of this rural community comes from the local teacher, who, now an old man, looks back at the events of that year. He does this in part by a voiceover narration and in part by his presence in the film as the young teacher. As the teacher much of his contact is with the children of the village. And it is the children who are the stars of the film. Both in terms of the outstanding performances by the young actors and in terms of their pivotal role in the film. Most of the unusual happenings involve children in one way or other. They are either the protagonists or they are the ones who suffer the consequences.

And the consequences tend to be pretty brutal. This is a portrait of a repressed and fearful community in which both physical and psychological punishment is inflicted on those who transgress. In this village sex is shown as something brutal or abusive or as something to be repressed. The white ribbon of the title refers to a ribbon used by the local Pastor. Ostensibly a symbol of purity and innocence, in the film it becomes a symbol of oppression and shame when he forces his teenage son and daughter to wear a white ribbon as a form of punishment.

It is also a deeply conservative and hierarchical society, which is dominated by the Baron and to a lesser extent by the local Lutheran Pastor. Everyone else lives in awe of them. Anyone who challenges their authority is likely to suffer.

The film is shot throughout in black and white which both gives the film an old fashioned look and emphasizes the threatening and foreboding atmosphere which suffuses every scene. Most of the scenes are indoors or in some constrained setting and the film does have a claustrophobic feel about it. There is a sense of not being able to escape, either physically or psychologically. None of the characters are particularly attractive neither in character nor in appearance. Just about everyone has a dour, almost hateful expression. The only two characters who are at all attractive are the young teacher and his fiancee. Significantly, both are from other villages and they are in contrast to the villagers they are mainly seen outdoors.

The cast is pretty much perfect. All unknown to me and probably to most non German audiences. The Pastor is particularly good and one can easily imagine being terrified by his mere presence. The children as already mentioned are excellent and they all have a sort of dull, haunting and slightly frightening look about them. The direction and camera work is a wonder in itself. Haneke likes to hold on to a scene for a long time. For example we see a corridor and the doors at its end. The camera holds this view for what seems like forever and hardly anything happens. Someone enters or leaves or somebody just passes by. We are left wondering, not quite sure what to expect. Just this sense of claustrophobia and surreptitiously eavesdropping and slightly fearful for what we might see.

At the very beginning of the film we hear the voice of the old teacher setting the scene and he suggests that these painful events "could perhaps clarify some things that happened in this country". Knowing what did come next in the 1920s and 30s not just in Germany, but in many, if not most parts of Europe, encourages us to view the film as something more than just a German children’s story - the film’s subtitle in German. For it would be the children of this pre First World War world who would come to full maturity in the 20s and 30s. According to Haneke, the film is about the origin of every type of terrorism, be it of political or religious nature. This is certainly a very powerful film and without a doubt one of the best films I have seen this year. It is a simply riveting and majestic film - a true masterpiece.

Email ThisBlogThis!Share to TwitterShare to FacebookShare to Pinterest
Labels: Films