This month has seen the first anniversary of the end of Israel’s brutal assault on Gaza which involved the death of over 1400 innocent Gazans. This massacre included the death of over 400 children. To mark this atrocious act Tayside for Justice in Palestine sponsored an art installation entitled “A silent scream for a’ the bairns o’ Gaza.” This installation was created by local artist Pat Donachie and consisted of 400 mini coffins draped in the Palestinian flag and two piles of children’s shoes - 400 pairs in all. The installation was on display at the Dundee Mosque and again in the City Square, where we attracted the interest of many passers by. Here are a couple of photos of the installation. 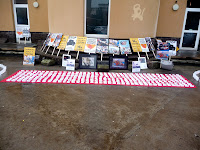 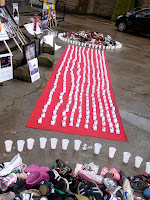 On the Gaza assault there is a excellent piece by Jerome Slater, a professor (emeritus) of political science at State University of New York. In his piece which looks in some detail at the Goldstone report, he succinctly demolishes the Israeli claim that Israel acted in self-defence. He points out: “that Israel’s obvious alternative to any use of force was to end its occupation and repression of the Palestinians. In that light, Israel has no “right” to claim self-defense, for the true purpose of its siege and military attacks is to crush resistance to the occupation--or, as Henry Siegman has put it, “to protect [Israel’s] right to continue the strangulation of Gaza’s population.” Put differently, the Israeli attack on Gaza was a war crime in and of itself—the crime of aggression—even if its methods of warfare had not also been war crimes.” The piece, well worth reading in full can be found here.

Slater’s piece is a useful reminder that everything about Israel/Palestine comes back to the occupation. And what is most frightening and horrific is that this illegal occupation is still growing day by day. Yaniv Reich, an Israeli blogger, has a fascinating post entitled: “Strangely, Israeli security typically requires land cleansed of Palestinians.” In it he examines the social and psychological structures that allow Israelis to accept their little apartheid regime. In particular he looks at an article by the journalist Yitzhak Laor in Ha’aretz. The article describes Israeli reactions to the recent High Court injunction to desegregate highway 443, one of the West Bank’s main highways. Laor wrote: “What does Israeli logic say about Route 443 and barring Palestinians from using it for years, in the best traditions of apartheid? (Which is flourishing here but which we are not permitted to call by that name.) Logic dictates that we need this road because it shortens the distance to Jerusalem and eases congestion on Highway 1. But because this efficient road passes through occupied territory, and has done so for 42 years – a temporary occupation, of course (here, in the script, the Supreme Court justices call for a wink) – it endangers the lives of Israelis. This is because the inhabitants of the occupied territory don’t like the idea of their land being used without their permission.

Therefore, for our convenience, we have to prevent Palestinian drivers from using the road. Here, too, the Israeli argument ranges from arrogant fury, as in “Who are you tell us how to defend the lives of our children?” to “After all, we do want to see two states for two peoples, etc.” And as always, an examination of the argument reveals that what the Israelis call security, even when they are speaking absolutely sincerely, is not security but ownership of land cleansed of Arabs.” Laor goes on to make the essential point about Israel: “Whatever the nature of the solution, from the Israeli point of view it always entails the removal of Arabs from areas where Jews live.” Is this the kind of state that we in the UK should be supporting? An exclusive racist state. You can read the whole piece here.

Yaniv Reich has another little piece which highlights that Israel’s conception of peace involves a permanent West Bank presence. It seems that Prime Minister Benjamin Netanyahu said Wednesday that Israel must have a presence in the West Bank even after a peace agreement is achieved, the first time he has spelled out such a demand. “This will require the Israeli presence on the eastern side of a Palestinian state.” As Reich puts it: “No freeze to settlements, no Palestinian capital in East Jerusalem, permanent Israeli presence in the ostensibly Palestinian state. . . . This is a recipe for endless violence, advocated forcefully from the Prime Minister’s office in Jerusalem.”

Two further links to articles about the ongoing attempts at ethnic cleansing by Israelis in the West Bank. The first, here, is about an attack by Settlers on Ta’ayush at Hilltop 18. Ta’ayush is a grassroots movement of Arabs and Jews working to break down the walls of racism and segregation by constructing a true Arab-Jewish partnership. Together we strive for a future of equality, justice and peace through concrete, daily, non-violent actions of solidarity to end the Israeli occupation of the Palestinian territories and to achieve full civil equality for all. As such it is regularly attacked by the settlers and their protectors in the Israeli Defence Force.

The second is an article about the growing resistance to Israel’s continuing land grab. Published on the net by Jewish Peace News, here is the introduction to the article. “Bypassing politicians, the bogus "peace process," and Israel's current pretense at a settlement freeze, an actual movement of political change and resistance is gradually but persistently taking place in Palestine/Israel. Palestinians, Israelis, internationals, women and men, youth and older people, join weekly to resist injustice, oppression and a land-eating dragon-wall. In the article below, published in The Nation, Jewish Peace News contributor, Joel Beinin, reports on and analyzes this movement and describes its evolution.” You can read the full piece here.

It is movements like those described in Beinin’s article that offer the best hope we have for a just peace. Whatever we can do to publicize and support their efforts is one way we can help these brave people. Let our MPs and government know that there is another way possible in Israel/Palestine.

This first anniversary of the Gaza massacres also coincided with a talk by Holocaust survivor Dr Heyo Meyer. This was a very well attended talk. Dr Meyer’s main subject was the Misuse of the Holocaust for political purposes. He contrasted what he termed traditional Judaism with political zionism. Traditional Judaism is essentially humanitarian and universalist and is based on the notion that all humans are fully equivalent. On the other hand political zionism is xenophobic, nationalistic, exclusive, colonialist and racist. According to Dr Meyer, Zionism has developed what he terms Holocaust religion - the idea that Jews have a monopoly on suffering. Nobody has every suffered or will ever suffer like Jews have, therefore Jews can do what they want to anybody.

Dr Meyer further outlined the basic similarities between the Nazi treatment of Jews and how Israel treats Palestinians. In both cases there are different laws, arrest without warrant and indoctrination through propaganda. This was a very impressive and powerful speech and he ended by calling on everyone to become active in the Boycott, Divestment and Sanctions campaign.