Over the summer months I have had less time than normal for stitching, so I have only managed to complete two projects and finish off a previous piece.  The first new project was the fourth in my series of Five Easy Pieces.  As with the others this was made up of five Bargello patterns.  The patterns are all fairly traditional and come from either The Bargello Book by Frances Salter or Bargello, A Fresh Approach to Florentine Embroidery by Brenda Day.
This time the central section was a circle, which is almost impossible to accurately create on a woven fabric such as the Aida fabric which I use.  Still the result is pretty close.  I chose a combination of pinks and blues for the main sections with black to form the borders.  As usual the threads are DMC cotton in two strands.  Unlike most of my work this piece was designed from the start to fit into a wooden frame I had picked up second hand.  So here is the finished article. 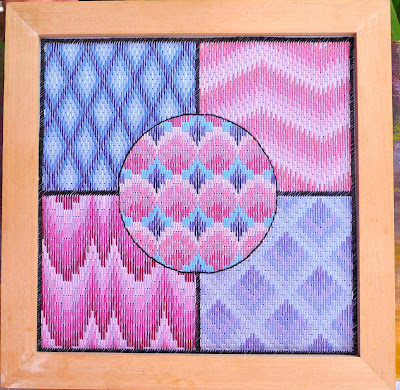 The second project was one of my “frivolities.”   The idea for the piece came from a photo which I found in a blog which I dip into now and again.  Miss Rosenthal blogs from Málaga about trends in fashion, design and creativity.  In March 2009 she put up a post entitled, “La Felicidad era esto”.  The happiness is remembering the joys of Spring.  Accompanying the post was this lovely photo of some clothes she had found in her wardrobe. 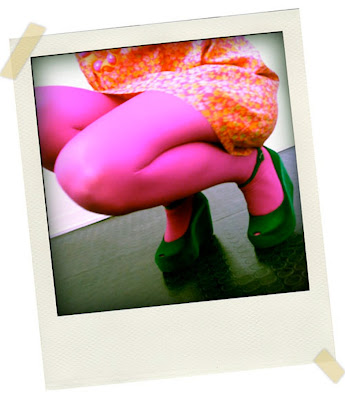 I just loved this photo - its vibrant, clashing colours and the unusual pose.  From the first I wanted to use this photo to create some kind of stitching piece.  And it has only taken me about a year and a half to do so!  However better late than never, and last month I finally got round to creating something.  As I do not do attempts at recreating pictures or photos, it would have to be something abstract.  The central section is my take on the tights and shoes, and for this I made up my own version of the jacquard stitch.  The border area represents the skirt, and is made up of scotch and cashmere stitches in various sizes.  For the colours  I used more or less what was in my stack, so the colours are not an exact match.  Plum and emerald make up the centre and orange, pumpkin, yellow and gold the border.   This piece was also made to measure, as I had recently acquired a little cardboard frame.  On reflection the border may be just a tad too big.  I may try and find another, slightly smaller frame.  But on the whole I am quite pleased with my little piece which I have titled, La Felicidad es esto. 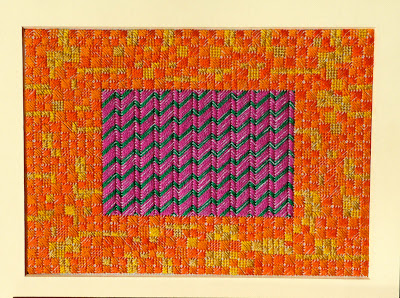 In addition to these two major projects I have at long last managed to finish off a piece I stitched last October.  This was a mini-tapestry inspired by the spire of a church in Turckheim, which I visited last year.  In a little maze of a store in the village of Letham in Angus, I found a bunch of willow canes, more or less the right thickness.  I cut them into sections and wove them in and out of the canvas to make a kind of frame.  With the attachment of some green and blue threads I finally have my completed mini-tapestry, which now hangs in our hallway. 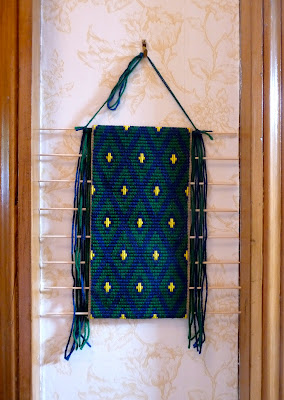 I have just started work on some mini biscornus which I hope to turn into lavender sachets.  For these I will use some of the new threads I have recently acquired from Les Fils du Rhin, a little on-line store in Alsace.  The threads are hand dyed and come in a wonderful array of colours.  Each thread is made up of three or more colours, so you end up with a most unusual pattern.  I am quite excited about trying out these threads, which you can see below. 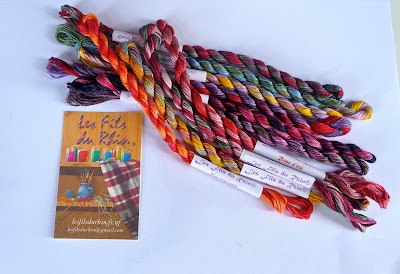