This was the Reading Groups’ book for September, and demonstrates the advantages of reading groups.  For this is not a book I would have chosen for myself.  Despite this unpromising start, it turned out to be a truly fascinating book.  It describes the author’s attempt in 2004 to journey down the river Congo.  The idea was to retrace the steps of nineteenth century explorer H M Stanley, the first European to journey down the massive river all the way to the Atlantic ocean.
Though the book does indeed vividly recount Tim Butcher’s journey and his many travails, this is more than a mere travelogue.  Subtitled A Journey to Africa’s Broken Heart, the book is really about the Congo itself, its peoples and how it has become a country not just in decline, but “undeveloping”, as Butcher characterizes it.
The journey itself was a pretty terrifying and almost foolhardy affair.  Tim Butcher himself describes it as ordeal travel.  At every turn he faced challenges, difficulties and threats.  It involved travelling through thousands of kilometres of virtually impassable equatorial rainforest.

The road and rail network was in ruin and overrun by forest.  Politically the country in 2004 was just embarking on a process to end the decades old civil war which had caused so much destruction.  This all meant that not only was there no transport network, much of Eastern Congo was a no-man’s land still under threat of civil war.
Tim Butcher was however nothing if not determined.  He was also incredibly lucky in the help he found along the way.  Whether it was UN agencies, international NGOs or local Congolese, he always managed to find a way forward.  Though the Congo is famous for its corruption, Tim encountered many Congolese who were of impeccable honesty, demonstrating that corruption is not some condition intrinsic to Africans.
His journey took him through some of the most inhospitable terrain in the world.  The constant struggle against the heat, humidity and malaria infecting mosquitoes brought home to me just why I am most unlikely to ever visit this part of Africa.  Beautiful and fascinating as it seems to be.  The route down the Congo starts on Lake Tanganyika and ends some 3 000km later by the Atlantic ocean.  Tim Butcher made this mammoth journey by motor bike, boat, canoe, helicopter and car.  The most unusual was the canoe, or pirogue as they are known in the Congo.  Simple canoes, dug out of felled trees they are still the most common means of transport on the river.  Modern pirogues do not differ much, if at all from those of hundreds of years ago as can be seen from the two photos below.

Though the river is navigable for much of its length, there are long stretches of rapids which prevent any river traffic.  One such is found below the capital, Kinshasa, shown below. 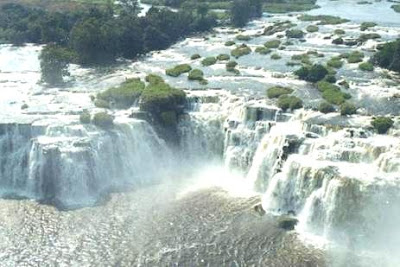 Throughout his account of the journey Tim Butcher takes every opportunity to reflect on the history of the Congo and in particular how this potentially rich country has become so poor, backward and violent.  There are no easy answers to this, though the ravages of colonialism play a big part in any explanation.  Belgian rule in the Congo was not just very brutal, but very racist.  Nothing was done to prepare the Congolese for independence when it came in 1961.  Not that Tim thinks the British would have made a better job of it.  As he puts it, “It might be extreme and it might be shocking, but what happened in the Congo is nothing but colonialism in its purest, basest form.”
Unfortunately with independence did not come freedom.  The outside world, in the form of Belgium and the USA, decided to intervene to protect their own interests or at least the interests of the giant international mining corporations.  The Congo was plunged into a bloody civil war and then the Western backed dictatorship of Mobutu who proceeded to misrule the country in his own interests - and those of the mining corporations.  More bloody civil war came with the fall of Mobutu and only now is the country beginning to experience some kind of peace and stability.  It will probably take decades however for the rule of law to become established throughout the whole country.
Other parts of the world also suffered from colonialism and post colonial exploitation, but none seem to have remained so trapped in under development as most of sub-Sahara Africa.  Was there something special about the colonial experience there?  My only thoughts on the matter are that in Africa the colonial powers more or less completely destroyed the existing African tribal cultures and their traditions of government.  As Tim Butcher puts it, “Society was tribal, with authority lying in the hands of village chiefs and, above them, paramount chiefs.  But local people enjoyed sovereign power to the extent that they could get rid of unpopular chiefs.  No chief could afford to ignore totally the will of his subjects.  Decisions had to be taken, at least in part, with the interests of the people in mind.”  All this was destroyed by colonialism and in its place came the centralising power of the state.  Tribal society was never given the opportunity to evolve into something different.  African writers themselves have written eloquently about this and one of the greatest of all is Chinhua Achebe who in a series of novels has chronicled the savage destruction of traditional Igbo culture in Eastern Nigeria.
Blood River is a wonderful book, which raises more questions than answers and I would highly recommend it to anyone who likes a good adventure and in particular to anyone who wants an introduction to what lies behind the tragedy of modern Africa.  Then go on to read Chinhua Achebe.
Posted by Unknown at 10:55