Postcards from the Black Forest

This autumn we had the good fortune to make a couple of short trips to southern Germany.   The main one was to Freiburg in the Black Forest.  I had heard a lot about the Black Forest and how beautiful it was and of course I had eaten many a slice of Black Forest gateau, which is very popular in Scotland.  However I had no idea of just large the area is.  I thought it was just the southern tip across the border from Switzerland, but no, the Black Forest stretches all the way north to just before Karlsruhe.  Nearly 200 km in length and about 60 km wide it is a very large area indeed.


On this trip we only managed to get a glimpse of part of the southern Black Forest.  We crossed the border just outside Bad Säckingen on the river Rhine and headed north.  Unfortunately the navigator, yours trully, misread the map and we ended up taking a detour.  This had the advantage of letting us see some of the more isolated parts of the Black Forest.  It also confirmed that the area is well named.  There are a hell of a lot of trees and it does look pretty black most of the time.  The other advantage of this short detour was that just before we re-emerged on the main route we passed by a one family car boot sale.  More accurately the goods were on display in the family's garden.  We stopped and rummaged about and left with a fine range of goodies, including a scooter for Alessio.  All for next to nothing.


We continued on our route heading for Freiburg and around lunchtime as we passed through a winter ski resort, Muggenbrunn, we saw what looked like a delightful restaurant.  And delightful it was.  The Hotel Grüner Baum is in a traditional building and the restaurant serves traditional Black Forest food, all served by waitresses in traditional costumes.  It was a warm and sunny afternoon - what more could one want.  Here is a happy Emma relaxing after the meal. 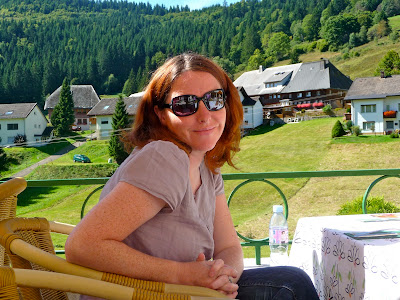 Suitably refreshed, we were soon in Freiburg im Breisgau, our destination.  This is another little gem of a city and the heart of the Black Forest.  Full of beautiful old buildings and cobbled streets and alleyways.  Most of these old buildings were ablaze with colour and some were covered in ornate decorations.  You can get an idea from the collage below. 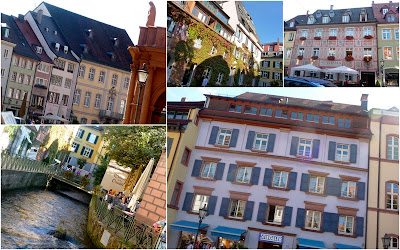 The main public space in Freiburg is by the Munster, a fine building itself.  The next photo is of part of one of the very colourful buildings in this square.  This is followed by one of the delightful narrow streets or alleys. 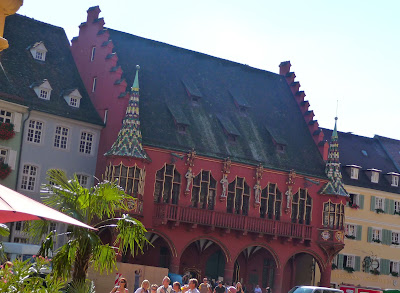 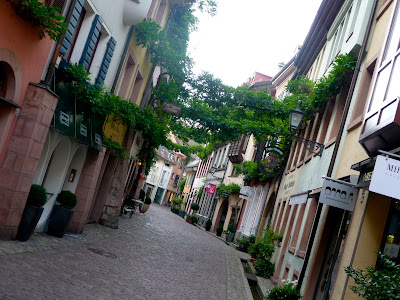 Freiburg now has the full complement of modern transport options, including some lovely trams.  However it also boasts a couple of more unusual and older ways of getting around the place.  Consumption of lots of beer seems to be an obligatory part of at least one of these options. 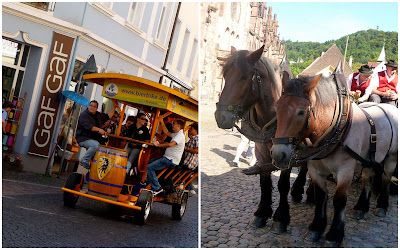 Much of the charm of Freiburg comes from the surviving examples from its past.  Like many medieval towns, Freiburg had fortified gates into the old town.  Two of them survive in very good condition. 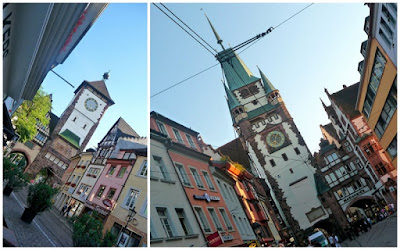 The pavements of Freiburg were most interesting.  Many of them were covered with intricate mosaics.  Most of them represented the shop or business in the building beside the mosaic, though some just seemed to be decorative.  I loved them all.  Here are a few. 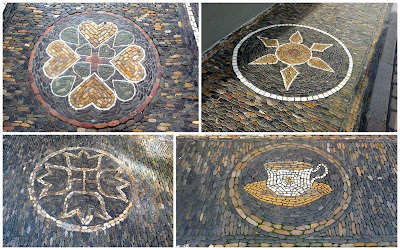 Also at street level were the gutters which crisscrossed the town.  They all had running water in them and most were in good condition, free from litter and other detritus.  They are clearly a tourist attraction for children as you could buy specially made little boats to pull through the water.  Alessio found this great fun. 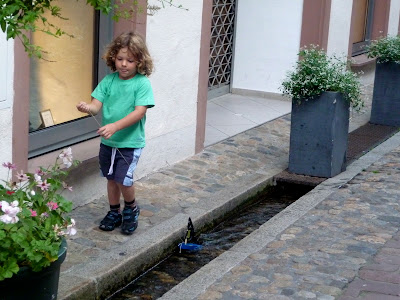 All in all Freiburg was a wonderful place to visit.   We were blessed with lovely warm sunny weather, which always helps.  However Freiburg was just a delight.  The cafés and restaurants were all very enticing and the ones we sampled excellent both in service and food.  Freiburg is also very lively place with throngs of people strolling about or just sitting in the sunshine supping a coffee or a beer.  There were also plenty of street entertainment to keep everyone amused, as with this pretty juggler. 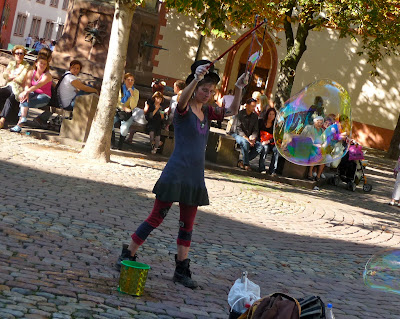 On the Sunday afternoon as we drove back to Zürich we had two more adventures.  The first was one of these totally unexpected pleasures, when you by chance come across something delightful.  In this case we happened to drive past a little apple festival in the Elzacher valley.   A traditional brass band was on hand to provide musical accompaniment to the many guests who were happily gorging themselves on an irresistible selection of local goodies.   Though the main excuse was to celebrate the range of products from the humble apple, other fruit products were on sale.  A very popular liquid refreshment was a glass of Sekt, the German version of champagne, doused with a little fruit syrup.  There was a great range to choose from and all looked good.  We managed to try a couple each and bought some bottles to try out back home.   The festival was also an opportunity to see some of the traditional presses that used to be used in extracting the juice from apples.  Below is a collage from the festival. 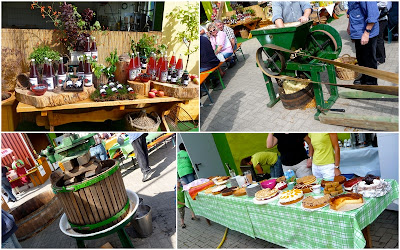 Our next stop was the Black Forest Open Air Museum Vogtsbauernhof which is near Gutach.  Emma had found out about this museum on the internet and thought it would be interesting to Alessio.   It is in fact a wonderful museum.  A collection of original farm buildings from all over the Black Forest which have been lovingly moved and restored to their former glory in the Vogtsbauernhof.  Some of the buildings are very large and impressive, like the one below. 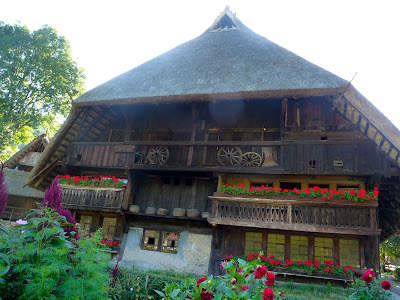 Inside each building you can see the actual implements used in the past, and in some cases the living quarters of the people who lived on the land.  There is also a fine collection of farmyard animals.  The collage below shows some of them. 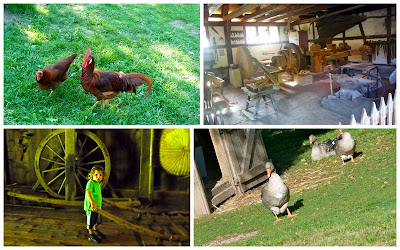 Unfortunately Alessio was not particularly impressed with all this history.  Luckily there was an extensive playground for children, so he will probably have fond memories of his visit.  For the rest of us there was so much to see and do.  If we had more time we could have made our own scarcrow.  Kathleen was particularly keen on this.  There were also some living examples of traditional costumes to admire, as can be seen in the photos below. 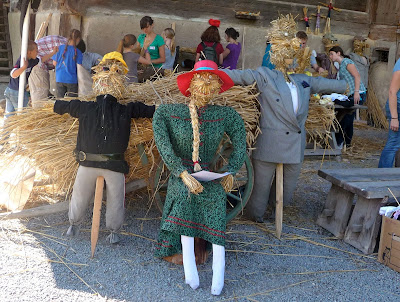 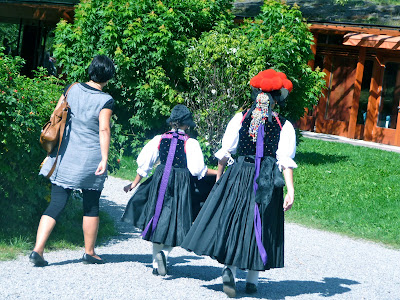 This was our first trip to the Black Forest and most enjoyable it was.  We did have glorious weather.  However everyone we met was very helpful and kind, and everyone seemed to be pretty happy with life and enjoying themselves.  There is so much more to see and do in the Black Forest, it is a walker's paradise for example, that I hope to return again.
Posted by Unknown at 19:05