In Switzerland (4) Up and Down the Etzel

Over the last year Emma and Alessio have been trying to complete the series of walks which talkes you all the way round the Zürichsee.  We have accompanied them on a few of the sections.  Though the walk does go round the lake, many of the sections  take you quite a bit away from the lake itself and some involve quite a bit of climbing.  This is the case with the section which goes from Richterswil to Pfäffikon.  Emma and Alessio had already the first part of the walk which goes pretty steeply up to Schindellegi, and was as much as Alessio could manage in one go.

So last Saturday I accompanied them on the rest of the way.  Schindellegi is 685m above sea level which meant we had over 400m climbing ahead.  The town is nothing special, though it does have this spectacular church. 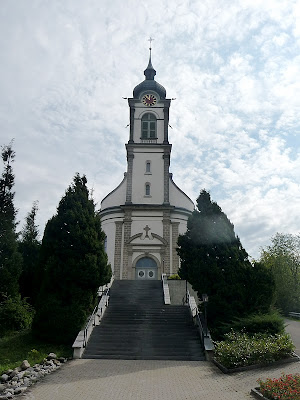 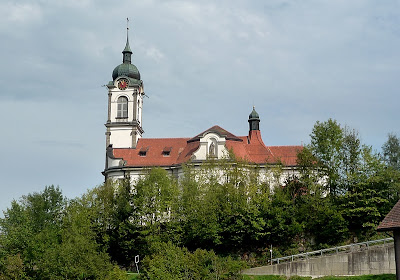 The walk starts off by following the southern bank of the river Sihl.  Most of this part is through a forest and is pretty level.  For some reason there were scores of walkers coming the other way.  Walkers of all ages and shapes.  Some even had beer bottles with them.  Below are some photos of this part of the walk. 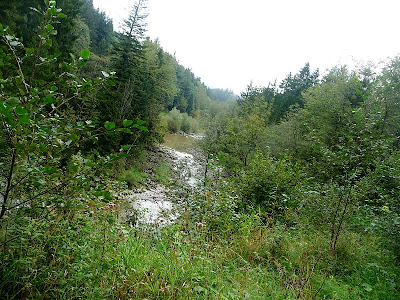 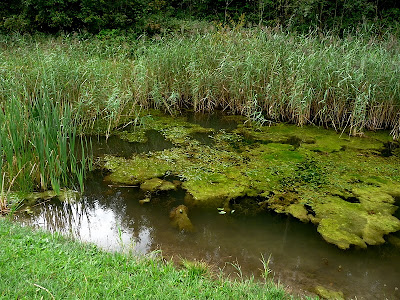 After we cross the Sihl again the real climbing begins.  At first through lovely farmland and then back into more forests.  To get into the woods you have to climb this sheer vertical ascent which goes through a very narrow opening between two fields protected by electric wiring.  A bit scary! 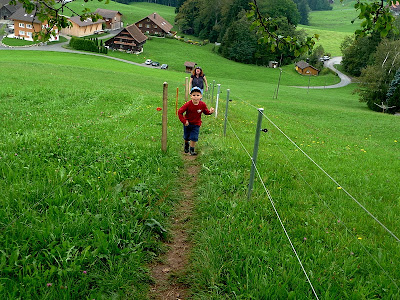 Once past this little hurdle the walk continues ever upward.  En route we passed two strange bunker like buildings, which apparently are stores for the Swiss army in times of emergency.  You can see one below. 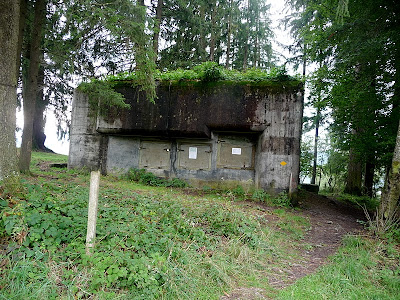 The final section is very steep though we were rewarded with some fine vistas, such as this one.  Below that Emma and Alessio on the final few metres before the summit. 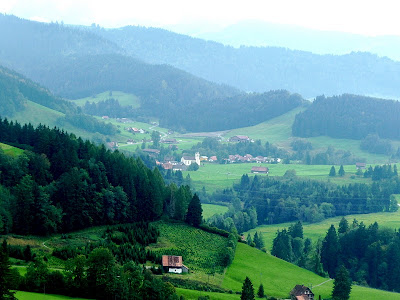 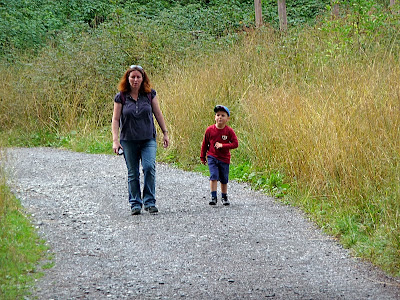 Once up, we were rewarded with a fine mountain restaurant where we partook of refreshments and enjoyed a little bit of relaxation.  Luckily there was an adventure playground which was much to Alessio's delight.  You also get great views from the restaurant grounds, particularly of the Sihlsee and Einsedeln.  Here is yours trully high above the lake. 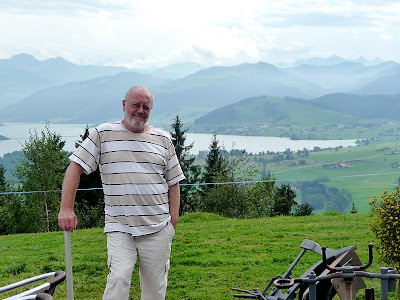 You most definitely need some recuperation, because the onward descent is even more steep than the ascent.  It starts with a shortish and brutal descent to St Meinrad, where there is a chapel in honour of the saint, who was the founder of the famous monastery in nearby Einsedeln.  Here is a view of the chapel. 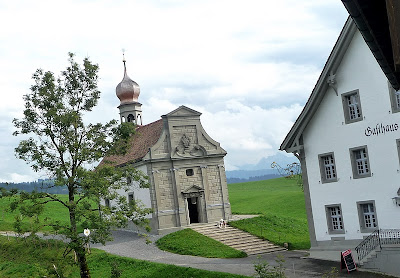 The remainder of the descent is just as steep and brutish and is almost all through dark forest.  Not really my scene.  I prefer open country for walking.  Though Alessio just loved the forest sections.  Anyway after much puffing and sweating we all emerged safe and (almost) sound at Luegeten.  This is a charming little restaurant above the Zürichsee.  We have been there a few times by car, but this was the first, and probably the last time on foot.  So it was an even more welcome sight than normal. 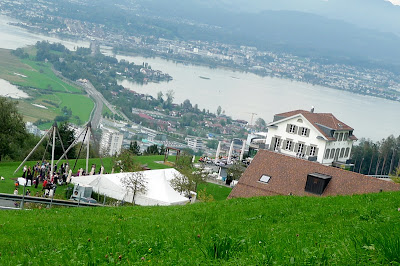 The restaurant is a very popular place and as on a previous occasion there was a fancy wedding reception enjoying the outdoor views.  Alessio somehow managed to join in and play with some of the children, while Emma and I just sat back and tried to recover.  From Luegeten we got the local bus down to Pfäffikon and then the train back home.  All in all a great day out.
Posted by Unknown at 08:15