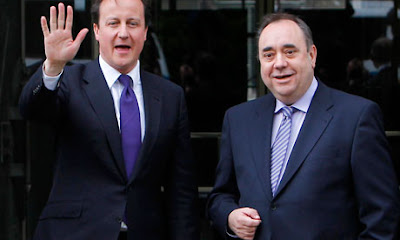 The initial skirmishes in the campaign for Independence for Scotland gives us an inkling of what is in store for us over the next 1000 days.  And it is not a pretty or edifying prospect.  Claims and counter claims will be made with great solemnity.  However without the time and resources to do a bit of research it will be very difficult for most voters to make much sense of the various claims.  We have already had a flavour of the more outrageous and unfounded assertions that the Unionist side will make.  For example George Osborne lets it be known that he, as UK Chancellor may not allow an independent Scotland to continue to use sterling as its currency.  An assertion that even Treasury spokespersons had to admit was nonsense.  However most newspaper had by then carried Osborne’s lie as a headline.  The subsequent denials were given little or not prominence.
This alas will be the norm.  Already we have had politicians and commentators wading in with dire predictions of how much of the UK national debt an independent Scotland will have to take - usually some astronomical figure.  Others claim that Scotland will have to shoulder all the costs of the bailouts of RBS and HBOS, despite the fact that both are clearly UK banks.  Then we have others claiming that an independent Scotland will be forced to join the Euro.  Which sits at odds with the claim by others that an independent Scotland will not actually be in the EU and will have to apply for membership.  Which of course might be denied - allegedly.  And of course there will be constant claim and counter claim about North Sea oil reserves.  Just how much oil is still there to be recovered.  How much it will be worth and finally, just where will the marine boundary between Scotland and England go.
All these and others are important questions and deserve serious and researched answers.  They are not of course questions that are unique to Scottish independence.  All countries which have become independent have had to find answers to these questions.  Since the fall of the Soviet Union there have been numerous countries in Europe that have become newly independent.  Most have done so without bloodshed.  Perhaps the most relevant for Scotland is the process whereby Czechoslovakia become the Czech Republic and Slovakia, both now full members of the EU.  The Czechs and Slovaks had to work out just who would get what out of the liabilities and assets of the Czechoslovak state.  Exactly the same kind of questions which are being raised in relation to an independent Scotland.  This was done through extensive negotiations.  Which is what should happen here.
Now normally negotiations would begin once both parties had agreed to independence.  But there is no reason why the negotiations cannot begin now.  The UK and Scottish governments could set up joint committees to work out the options and details of what independence would mean.  These committees would consist of UK and Scottish civil servants with the addition of outside experts nominated by both governments.  One such committee would look into the details of the economic and financial aspects of independence.  So instead of endless claims and counter claims about how much of the UK debt an independent Scotland would have to assume, this particular economic committee would present to the public the specifics of how the UK debt would be divvied up.  Now of course, it is perfectly possible that agreement may prove very difficult.  But at the very least we will know what is the basis of any disagreement and both governments will be able to publish their version.  Even in the case of some disagreement on the final outcome, it is likely that there will a great deal of agreement on many of the figures and we, the public will be much better informed.
This would be the key purpose of starting negotiations now.  To inform, us the electorate, of precisely what Scottish independence would involve.  Of course the UK government is unlikely to agree to such a proposal.  They would see it as akin to conceding independence in advance.  However, if the Unionists are so convinced that the UK positively benefits Scotland and that independence would be harmful to Scotland, then such negotiations would only provide irrefutable proof of their case.  Perhaps they realize that their case is not so irrefutable as they would like to think.