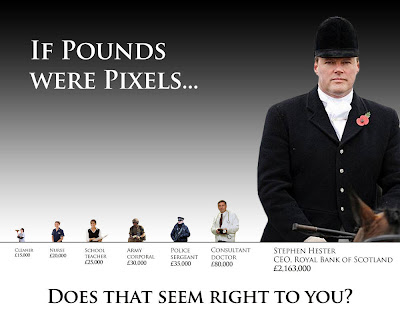 The financial rewards given to the top people in the banking and financial sector is once again in the news.  This time it was the nearly £1million bonus which RBS Chief Executive Stephen Hester will pocket for his alleged achievements over the past year.  This of course is in addition to the £1.2million that he earns as his basic salary.  This has not surprisingly generated a great deal of outrage amongst the public and a great deal of hand-wringing on the part of the government and the banking industry in general.
What this recent brouhaha shows is just how out of touch and incompetent our top bankers and our government politicians are.  It is simply incredible that bankers can even think of awarding themselves any kind of bonus when the country is in the midst of the greatest and most severe bout of austerity since goodness knows when.  Benefits are cut or frozen and wages for most workers are cut or frozen.  Yet our top bankers just have to get their hands on million pound plus bonuses.  On top of million pound plus salaries.  And we are told that “we are all in this together”.  To make matters worse some of out champions of industry on multi-million pound salaries presume to lecture the rest of us about the need to cut back on our wages and salaries!  For how much longer can they get away with this smash and grab?
In the case of the RBS, the public anger is all the greater as this bank is now effectively owned by us, the people.  Public money has been pumped into just about all UK banks and in the case of RBS it seems we, the people, own about 80% or more of the bank.  And yet the bank’s board and top management carry on as if nothing had happened.  Our ownership of RBS is via the government, which as the major, almost sole shareholder, has the right to determine how the bank should be run.  Yet it seems our nasty Coalition has done nothing, absolutely nothing to ensure that RBS is run in a way that benefits the country as a whole.  This of course would include ensuring that the pay structure and actual salaries paid, reflected the banks’s new status as a company owned by the people.
The government could quite easily benchmark the salaries at RBS to the Bank of England, our state owned central bank.  There Mervyn King, the Governor of the Bank earns £305,000 per year.  Now why on earth does the government tolerate paying Stephen Hester, who is effectively a civil servant now, almost four times that amount?  Four times what the Governor of the Bank of England earns.  Unbelievable.  Or it should be.  Now the conventional counter argument is that banking at the RBS level is a global business and you have to pay the market rate in order to attract and keep “the best”.  This argument is just so much nonsense.  In the first place, paying our astronomical salaries and bonuses did not prevent banks from almost ruining their companies and just about bankrupting the whole country.  Without public there would be no RBS and no million pound salaries, never mind bonuses.  If the current and previous lot of top managers is an example of “the best”, then we are in deep, deep trouble.  Perhaps a salary in line with the Bank of England might attract a more cautious and trustworthy management.  It is after all other people’s money - ie yours and mine - that the banks are supposed to manage.  A good dose of caution is most welcome here.
The notion that there is a global market in chief executives is also sheer nonsense.  Just look at where they come from.  They are predominantly white, male and European.  As the government effectively owns two major banks, RBS and Lloyds, it is in the wonderful position of testing the market.  Pay Bank of England type salaries to the top management in these banks and see what happens.  How many of the current managers would actually leave?  And where would they go?  Where could they go?  There cannot be that many vacancies in equivalent positions in the rest of the world.  And as many will have families, with children at school, would they want to tear everyone away to a new country.  Just to earn more than Mervyn King?  I have already posted more about this idea here.
An alternative would be to use the tax system to ensure that the public got the lion’s share of any bonuses or very high salaries.  Introduce a tax rate of 90% for all bonuses above, let’s say £20,000.  Banks can then pay out whatever bonuses they like, but we, or at least the government would get most of the money.  The same could apply to salaries.  Again to take the salary of the Governor of the Bank of England as the benchmark, any salary above, let us say £500,000, would be subject to and additional tax rate.  This tax would rise by, say 5% or 10% for every additional £100,000.  After all, if we are all in this together, then shouldn’t the very, very rich have to face some kind of austerity?
By refusing to do something about this continuing outrage of excessive pay and bonuses in the midst of public austerity, the government risks revealing itself as a bunch of incompetents.  If they can do nothing about this, then public faith in the political process is in danger of declining even more.  More is at stake here than just a million pounds or two.  We need a government that can actually exercise power over the very, very rich.  There is only so much resentment that the public can bear, before something gives.  Marina Hyde in the Guardian has an interesting article on this.
Posted by Unknown at 13:27