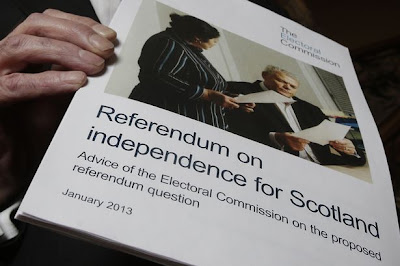 The UK Electoral Commission has recently called for both the Scottish and UK governments to provide clarity about what will happen after the referendum, whatever the result and called for both governments to agree a joint position.   This post only looks at some of the options for providing clarity in the light of a ‘Yes’ vote.  The vote on independence will be a momentous one, and a first for all of us in Scotland.  However we will not be the first country to go through this process.  Dozens of countries in Europe have become independent in the past twenty years or so.  The case most relevant for Scotland is that of the independence of the Czech Republic and Slovakia.  This was a peaceful process and is often referred to as  “The Velvet Divorce”.  So what lessons can we learn form the Czech and Slovak experience?  In preparing this post I have made use of a study on The Breakup of Czechoslovakia by Robert Young, Queen’s University, Kingston, Ontario, 1994.  The full study can be found here.

The first thing to note is that when independence did come, it all happened relatively quickly.  As Young points out, “Having accepted that separation would take place, the leaders quickly established a timetable and a basic framework for the event.”   Secondly, Young noted that, “Overall negotiations involved very few essential items.”  This is pretty much what the Electoral Commission wants to happen before the referendum.  Note that this is not pre-negotiations, but simply agreeing a timetable and framework.

In the case of Scotland what might this look like?  As regards a timetable, the Scottish government have already made public their view that negotiations should be complete in time for the next elections to the Scottish Parliament.  These are due to be held in May 2016.  In this case the timetable would be for the negotiations to be completed by, let us say the middle of April 2016.  This allows for a little leeway over any particularly contentious issues.  If the referendum is held in autumn 2014 as everyone expects, this allows around 18 months for the negotiations.  Will the UK government respond to this suggestion?  If there is a ‘Yes’ vote it will be in the interests of the rest of the UK to get the negotiations over with as soon as possible.  I imagine the business and financial sectors will be pushing for a quick resolution to the negotiations.  Uncertainty is bad for business we are repeatedly told.  As will various outside bodies, such as the IMF, the EU and no doubt the USA.  Each for their own particular reasons will not want the negotiations to drag on.

When it comes to the framework for the negotiations there will be two parts to this.  This could be termed the What and the How.  As regards what the negotiations will be about, according to Young, in Czechoslovakia the big issues were:

In the case of Scotland and the rest of the UK, a couple of other issues may merit specific negotiation:

This gives nine big issues to be negotiated.  There will be other issues to resolve such as diplomatic representation and the future of broadcasting and the BBC.  However these and other issues are more the stuff of political debate within an independent Scotland.

It should not prove too difficult for the two governments to come up with their own list of the most important issues to be resolved.  They do not need to agree at this point on everything.   Where they agree it goes into the joint, agreed statement.  If their are differences we can be told about them.  Remember the idea is to provide us the voters with as much clarity as possible about what will happen after a ‘Yes’ vote.

When it comes to how these issues will be resolved - the how of the negotiations - there may be less scope for agreement in advance.  However some general principles could be established beforehand.  For example in the case of Czechoslovakia two principles were agreed on early in the process.  These were:

In practice there were important exemptions to the first principle, as most of the Federal buildings and property were in Prague, the Federal capital, located in what was to become the Czech Republic.  In recognition of this imbalance Slovakia received financial compensation in lieu.  Something similar will probably be required here as the UK is one of the most centralized states in the world and most UK government buildings and property are located in London.  The second general principle was based on population.  It should not be beyond the wit of both the UK and Scottish governments to agree on something similar and to announce this publicly before the referendum.

It would also be good and encouraging if the two governments could agree on some statement about the spirit in which any negotiations will be conducted.  They need not further than the Queen’s recent visit to the Republic of Ireland, another former part of the UK.  While in Dublin the Queen had this to say about UK-Irish relations:  “Together we have much to celebrate: the ties between our people, the shared values, and the economic, business and cultural links that make us so much more than just neighbours, that make us firm friends and equal partners.”  It is certainly the aim of the Scottish government that Scotand and the rest of the UK remain firm friends and equal partners.  Will the current UK government make such an explicit statement in regard to Scotland?