Negotiating Scottish Independence - A Lost Cause? 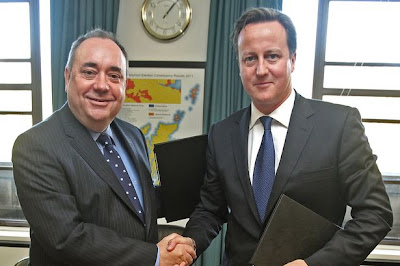 A  recent post in the Scottish Review raises the question of "whether Scotland has the human resources and institutional capacity to negotiate a successful independence settlement if the referendum delivers a ‘Yes’ vote.” The whole article can be read here.  The author, James Aitken, a former Whitehall civil servant, thinks the answer to the question is no.  Indeed, given the title of his article - Sleepers in St Andrew’s House?  They may already be embedded - it is clear that James Aitken is firmly of the view that Westminster will take a stridently hostile approach to any post referendum negotiations.  The UK government will play hardball and the small, inexperienced Scottish team will be steamrollered into accepting a poor settlement.  Aitken’s pessimistic conclusion is that, “it is hard not to conclude that, in its present state, Scotland does not possess the capacity to negotiate an independence settlement which would maximise the benefit to the people of Scotland.”

Aitken’s  article is a very useful contribution to the independence debate as it focuses on the crucial aspect of the post referendum negotiations.  He helpfully outlines just how detailed and overlapping these negotiations can be with, “sectoral committees eg defence, economic, energy etc, themselves subdivided into specialised subcommittees on eg the national debt, banking regulations, intellectual property rights etc.”  So having an experienced team able to staff all these committees will be vital for the Scottish government.  But just how valid are James Aitken’s pessimistic conclusions?

His view that the Scottish government would be incapable of negotiating a “successful independence settlement” is based upon two assumptions, both of which are at the very least challengeable.  The first is that the government of the rest of the UK will play hardball in any negotiations.  While they may indicate that now, in the hope of frightening people to vote no, will they do so in the event of a ‘Yes’ vote?  Is it in the long term interests of the rest of the UK to force an unequal settlement on its nearest neighbour?  How would such an overtly hostile approach be viewed by the UK’s current allies?  Is such an approach compatible with the EU’s guiding principles?  Both the Queen and David Cameron have recently celebrated the UK’s friendly and co-operative relationship with the Republic of Ireland - “a firm friend and an equal partner”.  According to James Aitken while this may be the case with the Republic of Ireland, Scotland somehow would be treated differently.  Is he seriously suggesting that Westminster would negotiate on the basis that Scotland was an enemy and a second or third rate country?  Not exactly the way to win friends and influence people.  For James Aitken seems to have ruled out the possibility that Scotland may have some useful cards to play in the negotiations.  For example how secure is Westminster that the rest of the UK would be regarded as the sole successor state and thus in no need to renegotiate any UK treaties and deals?  It might only take one member state of the EU to challenge this assumption for the whole of the rest of the UK’s position in the EU and perhaps in the Security Council to become open for public scrutiny.  Might it not be in the interests of the rest of the UK to reach a quick and mutually acceptable settlement with Scotland in order to avoid any third party challenges?

The second assumption in James Aitken’s case is that the Scottish government will only have at its disposal the current team in St Andrew’s House.  But what about the large number of Scots who currently work for UK departments, for example the Treasury, Defence and the Foreign Office.  Either there are no Scots working for these departments which seems unlikely, or James Aitken is privy to exactly how all of these civil servants will respond to a ‘Yes’ vote.  There must be a fair chance that at least some of them will choose to work for and towards an independent Scotland.  While there may be UK sleepers in St Andrew’s House, might there not equally be some unofficial Scottish sleepers within UK departments?  The prospect of helping to secure a beneficial independence settlement may be very inspiring for at some Scottish civil servants.  Not to forget that once independent there will be lots of promotional opportunities within an expanded civil service in Scotland.  Actively opposing this outcome is not the best way of advancing your career prospects.

A final point, James Aitken mentions Michael Moore by name in his article as the author of the playing hardball claim.  He omits to consider what the likes of Michael Moore will do in the event of a ‘Yes’ vote.  If he wished to continue his career at Westminster he would have to resign his current seat and hope to get selected for a constituency in England.  Which may be difficult if Scotland is about to become independent.  On the other hand if he resigns from the UK government and announces that, respecting the democratic will of the Scottish people, he wishes to become part of the Scottish negotiating team, then he achieves two positive outcomes.  Firstly he strengthens the Scottish negotiating team with his intimate, inside knowledge of how Westminster will approach the negotiations.  Secondly and happily for him, he greatly strengthens his chances of getting elected to the Scottish parliament.  As a bonus, given our PR system for elections, he might even be in line to become a Minister in the first government of an independent Scotland.
Posted by Unknown at 18:24