In and Out of Liechtenstein

Liechtenstein is only about an hour and a half's drive from Zürich and as we had never been to Liechtenstein before we took the opportunity during out last visit to add another country to our list. With a population of just over 35,000, Liechtenstein is the sixth smallest country in the world. From Switzerland you just drive over the river Rhine. If you are not very observant you are not aware that you are in another country. There are no border controls or customs as Liechtenstein is part of the Swiss custom zone, uses the Swiss franc and both are part of the European Economic Area. Once over the border we headed up straight away, climbing a zigzagging road and then under a tunnel to reach a hidden valley with Malbrun as its main village/resort. 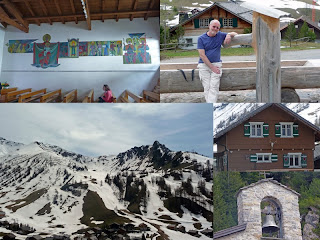 Malbrun is right at the end of the road and from here you can walk or ski over the mountains into Austria. It is a typical Alpine village with lots of wooden buildings, mainly chalets and some hotels. Though there was lots of snow still lying on the hillsides, the skiing season was over and the place had a real empty feel about it. The summer season for walkers and mountain bikers had not yet started so everywhere seemed closed. Still it was a lovely, clear and sunny day, so we wandered about a bit and looked into the little chapel high above the village and then headed off again to find a café. 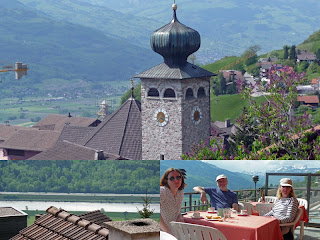 On the way down we passed a charming church with the traditional onion dome in the little village of Triesenberg, then found a lovely café with a fine balcony and we spent a relaxing time high above the Rhine looking over and down into Switzerland. All the while enjoying the coffee and torte.

We continued down the mountains and soon reached Vaduz the small capital of Liechtenstein. Vaduz is very easy to walk about and the central area is full of public sculptures, museums and galleries. Not that we had time to visit any. 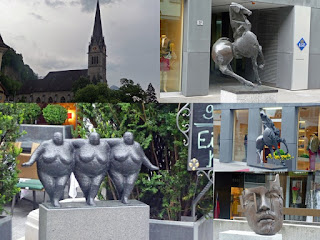 Liechtenstein is clearly a very wealthy place and Vaduz has its fair share of banks and other investment institutions. Pretty well supplied with fancy and expensive shops as well. Liechtenstein also seems to share the Swiss love of cows in public spaces. 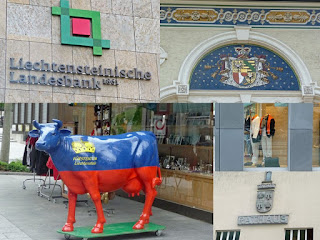 Vaduz is also the home to Liechtenstein's own Parliament. There are only 25 elected members, so it is not surprising that it is rather simple wooden building, more like a warehouse than a Parliament – not a patch on our wonderful Parliament building in Edinburgh. 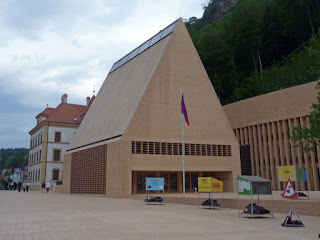 Liechtenstein has its own Monarchy, well Princes actually, as along with Wales, Liechtenstein is a Principality. The ruling family is the House of Liechtenstein and the Principality takes its name from the dynasty. The current Prince is Hans-Adam 11 and he apparently still has quite significant political powers. The princely family live in a very imposing castle which towers above Vaduz and is not normally open to the public. 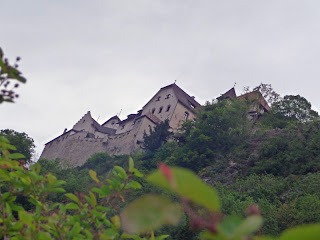 From Vaduz we headed off for Austria and in just over half an hour we had crossed the border, a real one this time with guards and customs. Not long from the border you come to Feldkirch a charming little county town. Feldkirch has a beautiful medieval centre though we only had a little time to wander about admiring the traditional buildings and shops before finding an Italian restaurant for much needed food. 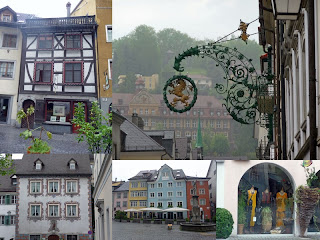 Unfortunately it had started to rain by the time we reached Feldkirch though that did not stop one of our number from enjoying himself. His love of rain must come from his Scottish heritage! 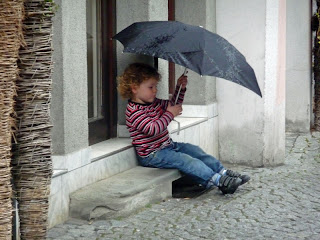 Leaving Feldkirch we drove back into Liechtenstein and in next to no time we were in and out again and over the Rhine, back in Switzerland, heading home to Zürich.