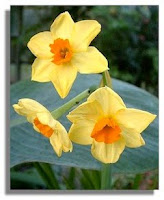 We are now well into March and already there is already a noticeable change in the weather. It is becoming slightly warmer and there is more daylight around. All this is most welcome as it has now been officially confirmed that here in Scotland winter was the coldest on record for over 60 years. Certainly felt like that. I usually reckon on March as the beginning of Spring which continues through April and May. Though there does not seem to be much agreement as to when Spring does begin or indeed end. This year the Spring Equinox comes on the 20th March. Now, on the basis that equi in a word means the middle of something, that would imply that 20th March is the middle of Spring. Not many people would agree with that. But our language does seem to be a bit at odds with our experience of the seasons. Whatever, there are now clear signs of new growth and colour even in our unkempt garden. Snowdrops and yellow crocuses brighten up our walk to the front door.

The rest of the garden I am afraid is still covered in leaves and other plant detritus from last year. I don’t want to frighten anyone with photos of that mess. Still, it all means that I will have to spend a not inconsiderable amount of time in the garden during the rest of this month - the sins of laziness come back to haunt us.

March does not seem to a prolific month for festivals, at least not this year as Lent and Carnival took place in February. However March is the month for celebrating the patron saints of two of our sister nations - Wales and Ireland. The Welsh start things off on the 1st March with St. David’s Day. While this is obviously a big event in Wales, it has never spread much to other places. I don’t remember any St. David’s events here in Scotland. On TV we would see colourful scenes from Wales of people dressed up in traditional costumes with giant leeks everywhere, but not much else. Unlike the Irish who seem to have turned St. Patrick’s Day into a global event. You can find Irish pubs everywhere, but I cannot recall a single Welsh pub anywhere. Whatever, it will be hard to escape St. Patrick’s Day on the 17th. There will two parades in Scotland - in Glasgow and Coatbridge. Plus no doubt plenty of singing and dancing in pubs and halls around the country. If you want to check what’s on in your area go here.

In St. Andrews March sees the annual poetry festival. Though poetry is the main focus, the festival tries to show poetry in all its many forms. So music, dance, film and visual art all feature prominently in the festival. One of the events I definitely want to see is a one woman stage show based on The World’s Wife, a sequence of poems by Caron Ann Duffy, now the UK’s Poet Laureate. You can check out the full programme here.

Mother’s Day or Mothering Sunday also falls in March. This seems to more of a commercial enterprise than a genuine celebration. Certainly I have no recollection of Mother’s Day while growing up as a young child. But that may be more a reflection of me than anything else. Still it is a well hyped time nowadays. With both our mothers now dead, it is Kathleen’s turn to get all the goodies on Mother’s Day. All gifts gratefully accepted.

This year the main Easter celebrations will come in April. However Palm Sunday, the start of Holy Week fall on the 28th. As a predominantly Protestant country there has never been much fanfare associated with Palm Sunday nor Holy Week as such. Sevilla in Spain is the place to go for colour and passion at this time. It’s usually warmer too.

March is also important for other faiths. The Sikhs celebrate the start of their New Year on 14th of March. So if you have Sikhs around your neighbourhood check out for any celebrations. Another New Year starts on 16th March. This is Nav Varsh, which is the beginning of the New Year for most Hindus in northern India. According to the traditional Vikram Samvat uni-solar calendar, it will be Vikram Samvar 2067 year. There is a small Hindu community in Dundee so I must see if they will be celebrating on or around the 16th.

Buddhist also have an important festival in March - Magha Puja - which falls on 30th. This is apparently the second most significant Buddhist festival. Buddhists attend services at temples and offer food and other gifts to monks. It is also common to walk around a shrine or Buddha image three times as a gesture of respect for the Three Jewels -- the Buddha, the Dharma, and the Sangha. The 30th is also the start of the Jewish Festival of Passover. Passover will continue into April.

For my branch of the Rutherfords, March has been quite an eventful month. There was one death in March, my uncle Jim - James Rutherford - who passed away on 6th March 1989. My father’s older brother, Jim went to live in the United States and settled in Connecticut. I remember meeting Jim once when he visited us all in St. Andrews. A lovely big man with a bushy beard.

Two of my great-great-grandparents, Henry Rodger and Elizabeth Lang, both from Kilconquhar in Fife, were married on 26th March 1836 in Carnbee Church. Carnbee was a small farming village, which is now almost deserted, with only a few cottages remaining. However the church still stands with fine views over the Firth of Forth out to the Isle of May and North Berwick.

March is particularly special to us as our lovely second daughter, Elena Victoria was born on 1st March 1976, in Craigtoun Maternity Hospital, just outside St. Andrews. Like her sister, Elena has always enjoyed birthday parties. Here is her about to cut her fifth birthday cake. 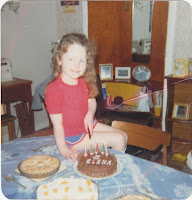 If you fancy a gemstone for March, you have a bit of a choice.

The modern, American gemstone is Aquamarine, which represents faithfulness, courage and friendship. The ayurvedic and other older traditions favour the bloodstone. This is considered a stone of courage. It was once believed to overcome enemies, to open locked doors and break down blockages. It was carried by soldiers to avoid being wounded and to stop bleeding. Bloodstone is still used today as a health talisman and to heal illnesses related to the blood and circulatory system. According to legend bloodstone came about as a result of some drops of Christ’s blood falling on and staining some jasper which lay about the foot of the cross.

A suitable image for March which sees the beginning of Holy Week. Whatever your faith, if any, I hope you find something to celebrate this month.