Last Monday, 22nd March, was World Water Day which was initiated by the United Nations in 1992 with the aim of drawing attention to the importance of fresh water and its availability. This year Tayside for Justice in Palestine mounted a street art installation to highlight the diversion and theft by Israel of water from occupied Palestinian land. Photo at end.

Since the 1967 war Israel has been in control of all the main water sources in Israel/Palestine. These include:

As a result of this Israeli control there is now a huge imbalance between access to water by Israelis compared to Palestinians. For example here is a summary of Water Usage in the West Bank

In addition Israeli actions continue to discriminate against Palestinians. This includes not allowing new wells to be drilled by Palestinians and confiscating many wells for Israeli use. Israel also sets quotas on how much water can be drawn by Palestinians from existing wells. Furthermore when supplies of water are low in the summer months, the Israeli water company Mekorot closes the valves which supply Palestinian towns and villages so as not to affect Israeli supplies. This means that illegal Israeli settlers can have their swimming pools topped up and lawns watered while Palestinians living next to them, on whose land the settlements are situated, do not have enough water for drinking and cooking.

It is interesting and a little suspicious to note that the so-called Security Wall being built by Israel just happens to syphon off even more Palestinian water for the exclusive benefit of Israelis. The Wall is not only an Apartheid Wall, but also a water wall. Some of the largest Israeli settlements (such as Ariel and Qedumin) are built over the Western mountain aquifer, directly in the middle of the northern West Bank agricultural districts, and this is exactly where the wall cuts deepest into Palestinian territory to surround and annex this vital water source. In the West Bank, around 50 groundwater wells and over 200 cisterns have been destroyed or isolated from their owners by the Wall. This water was used for domestic and agricultural needs by over 122,000 people. To build the Wall, 25 wells and cisterns and 35,000 meters of water pipes have also been destroyed.

The above information mainly comes from an American site - If Americans knew - which is dedicated to informing Americans and others about the true situation in Israel/Palestine. You can access the full article here.

All this of course amounts to theft on a grand scale. Israeli actions are doubly illegal. Under international law it is illegal for Israel to expropriate the water of the Occupied Palestinian Territories for use by its own citizens, and doubly illegal to expropriate it for use by illegal Israeli settlers. Also under international law, Israel owes Palestinians reparations for past and continuing use of water resources. This should include interest due to loss of earnings from farming.

Of course Israel has never given much respect to international law, nor to UN resolutions. The de facto annexation and control of water in the occupied Palestinian territories has always been, alongside the colonisation of land, one of Israel’s priorities. This long-standing aim of the Jewish state has been confirmed by confidential documents published by the British Foreign Office, in which David Ben-Gurion, writing in 1941, said, "We have to remember that for the Jewish state's ability to survive it must have within its borders, the waters of the [rivers] Jordan and Litani".

Israel gets away with all this due to its overwhelming military might, payed for incidentally by US taxpayers. And without American pressure it is unlikely that Israel will make even the most minor concession to international law. The recent spat between Israel and the USA over more illegal house building in occupied East Jerusalem may cause some in the US to reconsider their carte blanche approach to Israel, but don’t bet on it.

So the next time you enjoy a glass of fresh cool water, think of the poor Palestinians, denied equitable access to their own water by rapacious Israelis. 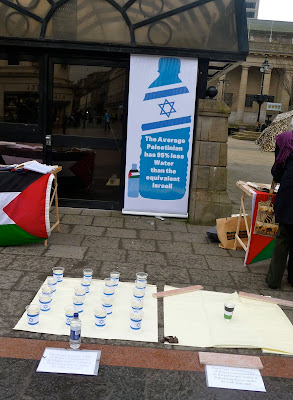