The close season is only two weeks old and already it looks like another vintage summer for lovers of transfer gossip surrounding FC Barcelona.  This is hardly surprising given that there are two daily sports paper published in Barcelona and another two published in Madrid.  And with very few football matches to report on, they have to fill their pages somehow.  It is just amazing how often they carry diamentrally opposed „exclusives“.  So far the speculation about Barça has centred on three players – Giuseppe Rossi, Cesc Fàbregas and Thiago Alcántara, featured in the photo below. 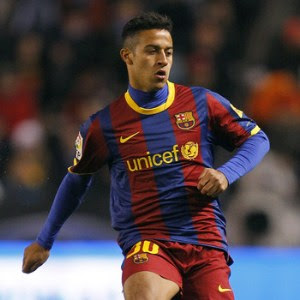 With Rossi, Italian international striker, currently with Villareal, we had the great pleasure of one paper headlining that the deal to sign Rossi for Barça was pretty much done and dusted, while another paper had for its headline that Barça were no longer interested in signing Rossi at all.  All good fun.
As regards Fàbregas, there has been no shortage of stories about this hardy annual.  This must be at least the third summer in a row in which Cesc is the priority signing for the club.  Or not.  While most reports/speculations continue to claim that Fàbregas is the pet project of Pep Guardiola himself, at least some reports suggest otherwise.  This is where Thiago Alcántara gets involved.  Everyone takes it as gospel that Barça cannot afford to sign all the players they appear to be interested in.  So, in order to sign even two quality re-inforcements, the club would have to sell some of their current squad.  And Thiago is the squad player most likely to fetch a good price.
What makes this particular story really interesting is that not everyone within Can Barça thinks this is a good idea.  Not by a long way.  For Thiago Alcántara is widely regarded as the next superstar to emerge from the fabled Barça youth system.  Opinion is thus sharply divided as regards the signing of Fàbregas.  Some reports take it as granted that Barça are still desperate to sign the player, while others say no.
This lack of reliable information about likely signings is amazing, though understandable.  None of the sports dailies have the resources nor probably the inclination to indulge in a bit of real investigative journalism.  Traditionally they rely on match reports and interviews with players and staff as their staple fare.  Nowadays not much gets out of the club.  If anything, the club are probably quite happy to feed the pack of journalists with stories to keep them at bay and off the scent of any real negotiations.  The key decsions regarding players at Barça are taken by the triumvirate of Guadiola, Andoni Zubizarreta and Sandro Rosell, the club President.  All of them pretty mute when necessary.
However a quick look at the past season and who played most of the time and even more important, which players did not play, gives us a pretty good idea of where Barça need to strengthen the squad.  The two key areas are up front and the defence.  Barça rely on three goalscoring strikers and last season only had three.  They badly need at least one other reliable goalscorer.  Hence the talk of signing Rossi.  To complicate matters though the club do have a goalscorer in the squad, Bojan Krekić.  Still only 20 years old (he will turn 21 in August), Bojan has been a first team player for the last four seasons.  Though he has never quite managed to become an established first choice his goalscoring record is pretty good.  Unfortunately for him last season was his worst season at the club.  Injuries and loss of form kept him out of the team for most of the season.  Guadiola and his staff will know enough about Bojan and his potential to have worked out whether it is worth while to persevere with the youngster or to take the plunge and sign a more experienced player.
The defence, especially the centre of the defence is the area of the team that has suffered most from injuries and the obvious lack of trust in squad players such as Milito and Fontàs.  While Eric Abidal seems to have made a good recovery from his operation, there must be a doubt regarding the future of Puyol who has himself had to undergo an operation on his knee.  Which probably means that Guardiola will not know until the new season is well underway just how quickly and satisfactorily Puyol has recovered.  This would all seem to indicate that at least one experienced cental defender and probably a good left back are needed to re-establish the balance of the squad.
All of which of course would lead one to think that spending €40+ million on a midfielder is a bit of a luxury.  Especially when the club already has the two best attacking midfielders in the world in Xavi and Iniesta and one of the most promising ones in Thiago.  But you never know.  Which of course is precisely where all the gossip and speculation comes in.  For nobody really knows or at least nobody is willing to tell, what Guardiola has in mind for the coming season.  One way or another all will be revealed.  But we face another couple of months of intense speculation and imaginative (and some not so imaginative) headlines to keep us occupied while we patiently wait for the football to start again.
Posted by Unknown at 09:03