When We Were Orphans, Kazuo Ishiguro 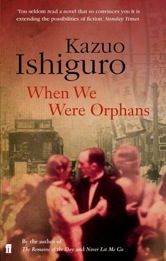 This was the Reading Group’s book for May and I was much looking forward to reading the novel.  I have previously enjoyed two of Ishiguro’s other works.  I listened to the audio version of Never Let Me Go and I also saw the film version.  Remains of the Day is of course a wonderful film.  So it was with great expectations that I started When We Were Orphans, particularly as this would be my first experience of reading one of Ishiguro’s novels.
It was alas a bit of a disappointment.  Though the novel starts with an interesting and promising idea the whole book is to my mind a great conceit on the part of Ishiguro.  Nothing in the novel or in the writing is ever what it appears at first sight to be.  Take the first part, which, like all the others is given a very precise place and date.  In this case, London, 24th July 1930.  However the first sentence begins – It was the summer of 1923…….  We are then almost immediately taken further back in time as the narrator recalls various incidents from his past, including a reference to his leaving Shanghai as a young orphan in the years before the 1st World War.  It is not until later on that we finally emerge in 1930.  A similar approach is taken with other parts of the novel.  Ishiguro clearly likes to play with time and with his narrator’s memories of time.  I suspect he also likes to play with us readers.
It is all beautifully done, as Ishiguro is a master of deliberate imprecision in his writing.  Here is an example of the convoluted way he allows the narrator to prepare us for an account of something that happened in the past.  – There was one other small incident from those weeks following my father’s disappearance which I have now come to believe highly significant.  I did not always regard it so; in fact, I had more or less forgotten it altogether when a few years ago, quite by chance, something happened which caused me not only to recall it again, but to appreciate for the first time the deeper implications of what I had witnessed that day. (p113)
There is much more very fine writing in the book, but what prevents it from working as a whole is that there is just too much variation in styles for no apparent purpose, other than to show off.  There is for example the intermittent use of an even then, old fashioned, upper class English of the stiff upper lip kind.  It even appears when the narrator is caught in the midst of a skirmish in the Sino-Japanese War.  Trying to comfort a terrified young Chinese girl, our narrator comes up with this drivel – Look here…. All of this… I gestured at the carnage, of which she seemed completely oblivious… it’s awfully bad luck.  But look, you’ve survived, and really, you’ll see, you’ll make a pretty decent show of it if you just…… if you just keep up your courage…(p271)
My main complaint about the book is that it just does not ring true.  Most of the story develops at a very leisurely pace, even though our narrator constantly reminds us that he still wants to solve the mystery of what happened to his parents in Shanghai all those years ago.  And yet he does absolutely nothing about it for decades.  When he does return to Shanghai in 1937, just as the Japanese invasion grows in ferocity, he also does nothing of substance.  Finally, almost out of the blue he decides to leave Shanghai with the married woman he has fancied since 1923.  Then, even more improbably, on the very night of his planned elopement, just hours before the rendezvous with his paramour, he goes off on the spur of the moment on a wild goose chase to discover the building where he believes his parents have been kept in captivity for 40 years or so.  30 odd years of doing nothing much and suddenly wham bam off he goes on a double whammy.  Unbelievable!
There is much that is good and enjoyable in the novel, but it does not add up to a satisfying whole.  I remain with the feeling that Ishiguro is just playing around with his undoubted talent and with us.
Posted by Unknown at 19:40

Email ThisBlogThis!Share to TwitterShare to FacebookShare to Pinterest
Labels: books, Novels, When we were orphans