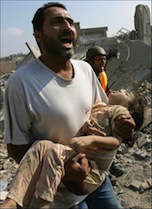 I pose this question in light of the recent outburst of killings in Gaza and southern Israel.  In this case the initial attack was launched by three militants in and around Eilat.  A bus with some soldiers on board was gunned down, and in all it seems seven Israelis were killed in the attacks.  What is particularly interesting about this is that the Israelis immediately blamed a specific Gaza based Palestinian group, the Popular Resistance Committees (PRC).  And then of course immediately started to bomb Gaza.  So far it seems that 15 Palestinians have been killed by the Israelis.
However the Israelis have as yet produced no evidence whatsoever that it was the PRC, or any other Palestinian group that carried out the attacks.  It is worth baring in mind that the initial attacks took place in Eilat.  This is an Israeli resort at the head of the Gulf of Aqaba, close to the Egyptian border in Sinai.  This means that it is hundreds of miles from Gaza.  There is also the little matter that no Palestinian group has claimed responsibility for the attacks.  As Paul Woodward explains in an article for War in Context:  “Generally speaking, Palestinian militant groups are not shy about claiming responsibility for attacks against Israelis — especially those that can be described as military operations where Israeli soldiers are killed or injured. Indeed, the problem is more often that too many groups — not too few — want to claim the honor.”
Woodward goes on to suggest that the reason for this is that it wasn’t a Palestinian operation.  There is some support for this claim.  First, the IDF itself refused to endorse the Government’s assertion blaming the PRC.  Secondly eye-witnesses reported that the gunmen were wearing Egyptian military uniforms.  Thirdly the Sinai has been the scene of various guerilla type actions in the recent past.  The blowing up of pipelines for example.  The Egyptian military has been trying to bring the area under control and round up militant groups.  Fourthly there are reports that the Egyptians have identified the people responsible for the attacks and one is a leader of a terrorist cell in Sinai, while another is a fugitive who owns an ammunition factory.   Thus it is quite probable that the Eilat attacks originated in Egypt and had nothing to do with Gaza or Palestine.
Not that the Israelis have ever bothered to let such facts get in the way of killing Palestinians.  Any excuse seem to do.  Israel kills Palestinians all the time. On average, the IDF kills one Palestinian civilian every two days with impunity in the occupied territories, as B'tselem documented last year.  In this most recent case the Israelis seem to have outdone even themselves.  Richard Silverstein details a particularly gruesome killing.  “Today, an Israeli drone performed heroically for the fatherland by incinerating a car (or in other reports a motorcycle) carrying a Palestinian doctor and his family to hospital seeking treatment for a sick child.  The doctor, his brother, and the doctor’s little boy were killed in the attack.  Ynet announced: Oops, we missed.  The drone was aiming for a terrorist cell traveling nearby.  WAFA says the doctor’s brother was an Al Quds commander, which would mean that the IDF is willing to kill sick 2 year old children in order to get alleged terrorists as well.”
So much for the most moral army in the world.  Alas there is mounting evidence that for many Israelis the only good Palestinian is a dead one.
Posted by Unknown at 13:23