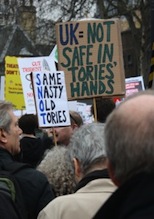 In the face of growing evidence that the Coalition’s economic polices are not working, the Tory party is once again displaying its true colours as the Nasty Party.  Their latest wheeze to help kick start the economy is to abolish the new 50p tax rate for high earners.  Which is further evidence of the economic illiteracy of the Tory party.
The new 50p tax rate only applies to people who earn more than £150, 000 per year.  Many of them will of course earn substantially more than that.   And how will this tax increase affect them?  How many goods and services will they collectively have to give up as a direct result of this tax hike?  I would suggest very little if anything at all.  After all these are the richest earners in the country.  They are not in general short of a bob or two.  After they have paid for their mortgage, if they have one, paid for the yacht, the holidays in the Bahamas, the private school fees etc, the residual money the have left, and often this will in itself be quite substantial, is just pocketed away.  Usually in off-shore accounts or private banks.  So the net effect of abolishing this tax would most likely simply give these people more money to invest.  It is most unlikely to result in any significant increase in spending.  Which is the only way that it could benefit the economy.


It is noticeable that one of the cheerleaders for this measure is Boris Johnson, Mayor of London and an immensely wealthy man.  Quite clearly he is more interested in feathering his own nest than helping the country.  So much for "We are all in this together" nonsense.  The Institute of Directors apparently warned that the tax will simply drive top earners abroad, while the CBI decried it as "economic vandalism".  Again little sign from these wealthy bastions of the UK economy that they have the slightest interest in the well-being of their fellow citizens.
Part of the problem is that the right in general have a false idea of how an economy grows.  They always suggest that giving more and more money to the already rich will somehow, magically, result in an increase in investment in the real economy.  But you do not need to know much about economics to realize just how daft this notion is.  Private individuals and companies invest in order to make money, not as a charity.  And they will only do so if they are pretty confident that their will be sufficient demand for whatever it is they are going to produce, be it goods or services.  With current government policies leading to a continuing reduction in demand - just why would anyone invest?  Giving the rich will not make any difference to this fact of economic life - it will just make the already rich even richer.  Which is presumably why the rich are so much in favour of this measure.
The reality is that we are in the middle of a long running investment strike, as companies and financial institutions hoard their money, thus keeping people idle.  See this article for details of this investment strike.  If we are to avoid any further downturns in the economy then what the government should be doing with the likes of Boris Johnson and his wealthy chums is to tax them even more.  Then use the money raised to directly invest in the economy.  Whether it is through improving our railways, schools or hospitals or maintaining good quality public services, the result will be to employ more people who, unlike the rich, will spend all, or nearly all of their income on buying other goods and services, thus keeping more people in work and in turn paying taxes.  Go on Mr Osborne - you know it makes sense!  After all - “We are all in this together - aren’t we?
For a simple explanation of the mess our nasty Coalition is making of the economy try Larry Elliott’s article in the Guardian.
Posted by Unknown at 18:59