Israel - Social Justice and the Occupation

Israel is currently in the midst of a major social protest which began on July 14th and is thus known in Israel as the J14 protests.  They started as a protest about housing prices in Tel Aviv, but quickly became a mass street protest with hundreds of thousands of Israelis camping out on the streets.  The protests have now spread to other Israeli towns and cities and the basic demand is for profound changes in the socio-economic structure of just about every aspect of life in Israel. 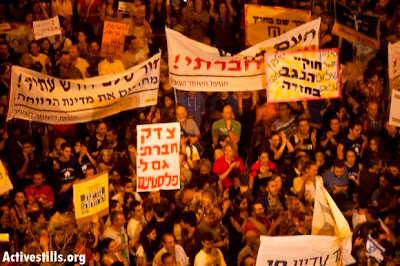 Except for one thing, the big O - The Occupation.  The protesters and their supporters in the media made it clear from the beginning that the protests and the demands were confined to life within Israel and would not get involved in anything to do with the Occupation.  It is not clear if this approach can hold.
In the first place Palestinian citizens of Israel have participated in some of the protests and there is a joint Palestinian-Israeli tent in Tel-Aviv.  This is because Palestinian Israelis have suffered the same injustices as their Jewish fellow citizens - only much worse.  While many Jewish protesters will continue to call for greater public spending for Jews and to hell with the Palestinians, this may become more and more difficult to sustain.  It would confirm Israel as an Apartheid state, which would conflict with the claim that Israel is a democratic state and would lead to difficulties with its sole backer - the USA.  It may be that through the protests more and more Jews realize that if they are to succeed in changing the policies of the government then making common cause with their Palestinian fellow citizens is the best way forward.
This seems to be the line taken, so far, by most of the Palestinians.  As Ami Kaufman puts it:  “Even the Arab speakers at the various demonstrations, from what I’ve heard (I may have missed some), have not directly addressed the occupation either – or even utter the word. Rather, they point out how they, too, are victims of capitalism and that they have it even tougher because of Israeli policies, of how the wealth is distributed. But the focus is still on money, on how the system screws everybody – equally.”   Kaufman’s line is that this is fundamentally a protest against capitalism and that, if successful, the protests may lead to ending the occupation, but only as a by-product.  His whole article is well worth reading in full - here.
Though the Occupation is not on the agenda as yet, it may force its way through into the consciousness of the protesters.   This is because as Ami Kaufman observes in his article the protest is mainly about money.  And so much of Israel’s money goes into the Occupation.  It is ironic that the one place where Jews can get affordable housing is in the illegal settlements.  Because they are heavily subsidized by the state.  This is just one example of how the costs of the Occupation continue to hurt and blight the lives of most Jewish Israelis.  At some point in the developing argument over how to divvy up the state’s spending, someone may start to question all this scarce money going to maintain the Occupation while most Israelis suffer from poor housing, the lack of good education and health services etc.
It is still too early to know just how these protests will pan out, but they do serve as a useful reminder that Israel is far from some safe haven and that within the Jewish majority there are huge and potentially destabilizing tensions.  Now that the genie is out of the bottle, who knows what will emerge.  For a Palestinian Israeli view on the protests here is the text of a moving speech by Odeh Bisharat.
Posted by Unknown at 13:07