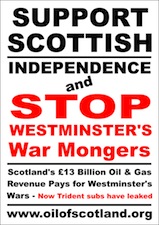 Yet another Labour Party stalwart has jumped into the breach to try and stem the tide of opinion in favour of Scottish Independence.  This time it is Willie Bain, Westminster MP and Shadow Scotland Office Minister.  This latest effort appears in LabourList which is a grassroots Labour Party online site.  Willie’s offering has the title Why the Left should beware Salmond-onomics, which is presumably meant to be an attempt at witticism.  If you have the stomach for it you can read the whole piece here.  Now the first thing to be said is that a leftwing critique of current SNP economic policies would be a most welcome contribution.  Alas, Willie Bain’s piece is no such thing.  It is one more blatant attempt to discredit Scottish Independence.  What is interesting about this piece is that Bain makes not attempt to present a positive case for the Union, but simply asserts again and again that Scotland is too wee and too poor to be a successful state in its own right.
He starts by off badly with a false premiss - that the referendum will be about the future economic policies of an independent Scotland.  Now this is plain nonsense and Bain must know this, or he is very badly informed.  The point of the referendum is to determine whether the future economic policies (among all the others) of Scotland should be decided by the Scottish Parliament or continue as at present to be decided at Westminster.  The referendum is not about policies as such.  It is about independence - the right to decide for ourselves which polices we wish to pursue, and to take the responsibility for these decisions.
Now policies, and in particular economic policies are important, and it would be good if the Labour Party were to offer some serious thought as to how an independent Scotland could improve the lives of its citizens.  However Willie Bain is clearly not remotely interested in this.   His alternative to his rather distorted description of SNP policy starts off very promisingly.  He advocates   “a Scotland prepared to join the new agenda being advanced by the European left on reducing income inequality, and securing long-term investment in manufacturing and other growth industries through institutions such as a National Investment Bank,”  Now this sounds more like it.  If only the sentence had ended there, but as the observant among you will have noticed, it ends not with a full stop, but with a comma.  For Willie Bain goes on to add, “within the United Kingdom.”  (my italics)
Does Willie Bain really believe that we in Scotland can only participate in this new European left agenda through Westminster?  That somehow we are too incompetent or whatever to do so directly?  Since he talks specifically of a European agenda, I presume that most, if not all left of centre parties in Europe are contributing to this agenda.  For example, Denmark, which currently has a left of centre government, led by a Prime Minister from the Social Democrats, colleagues of Labour in the Party of European Socialists (PES).   So we have the situation whereby Willie Bain’s political colleagues in Denmark can and do participate in and contribute to this new European left agenda directly on their own, without the need to belong to a bigger Union.  There is no United Kingdom of Scandinavia.  Yet, somehow a small country like Denmark, with a population almost identical in size to Scotland clearly manages to survive very successfully as an independent country.  Why does Willie Bain believe that Scotland cannot do so?
It is also rather defeatist of Willie Bain to claim that only through the UK can Scotland achieve this new left agenda.  Is he implying that in an independent Scotland the Labour Party would be reduced to a minor rump?  Has he no faith in his fellow Scots?  After all the Labour Party dominated the first two Parliaments in Scotland following devolution and less than two years ago won a stunning majority of MPs from Scotland in the last Westminster general election.  So why does he have so little faith in the prospects of his party in an independent Scotland that he is prepared to rely on the rest of the UK coming to his rescue?
For if this wonderful European left agenda is mean anything other than mere words, it requires the election of a left of centre government.  And is Willie Bain so confident that this will happen in the UK anytime soon?  After all the previous Tory government lasted for 17 years.  A rather long time to wait for any chance to implement this new agenda.  I would have thought that an independent Scotland is more likely to elect a left of centre government than the UK.  But Willie Bain will have none of this.  As the rest of his article shows, he is firmly convinced that Scotland, alone of all the countries in Europe, is simply too wee and too poor to meet the challenges of the future.  I wonder what his Danish Social Democrat colleagues say to him?  Has he ever asked them?