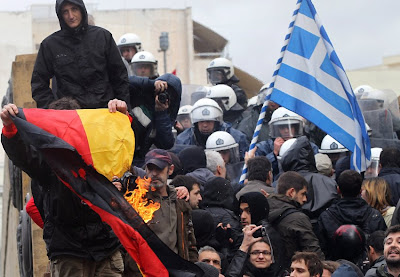 The current long running Greek tragedy continues.  The latest bailout package has it seems finally been agreed.  Yet nobody seems to be satisfied with the result.  If anything passions are rising by the minute.  As in all very difficult situations there is a natural tendency to find someone to blame.  And in this case Germany has been more or less single handedly cast in the role of the villain of the piece.  Not just in Greece, but in many parts of Europe, Germany is now portrayed as trying to dominate Europe through its financial power and aiming to establish a Fourth Reich.
This is all pretty powerful stuff and to some extent understandable.  It is always easier to blame someone else - anybody else - rather than face up to one’s own responsibilities.  And let us be clear here - the mess that Greece is in now is primarily if not solely the responsibility of Greeks.  It was after all a succession of Greek governments which indulged in some dodgy accounting practices to hide the reality of Greece’s public finances.  It was Greek governments which borrowed and borrowed with apparently no regard as to how they could repay these loans.  Now some of this irresponsible behaviour lies with the private banks and other financial concerns who leant all this money to Greece, without bothering if Greece would be able to repay the money.  But the primary responsibility lies with Greece.
Greece’s public finances are so unreliable that no private company is prepared to lend it any more money.  In order to stay afloat and avoid a default - with all the downsides that would bring - Greece has perforce had to ask the EU and the IMF to step in and provide emergency funds.  Which they have been prepared to do.  At a price.  And it is this price which has angered so many Greeks and others elsewhere.  The swingeing cuts in public spending that the EU/IMF are demanding are incredibly severe and are already causing great pain for many Greeks.  This pain will only continue and probably only get worse in the years to come.  But what is the alternative?
Since it was irresponsible borrowing and lending that got Greece into this mess in the first place, do we really believe that a further bout of irresponsible lending is the answer?  For make no mistake, further lending without conditions is tantamount to irresponsible lending.  Is that in the long term interest of Greece, not to mention the taxpayers of the other EU countries?  As I have posted before, Greece is in an incredibly difficult situation in which there appears to be no easy way out.  Whatever Greeks decide to do, they are faced with years if not decades of economic and social dislocation and pain.  But I do not ascribe to the view that the rest of the EU should just hand over loads and loads of money to Greece to do whatever it wants with it.  That is irresponsible.  It is also the view shared by all the other EU countries.  There is no point other than vindictiveness to single out Germany for blame.
Now, while I fully support the imposition of conditions to current and future loans, it is another matter altogether when it comes to the nature of these conditions.  The current wave of austerity and yet more austerity leading to recession, leading to even more austerity is self-defeating.  The conditions which the EU and IMF are imposing on Greece are just plain stupid and only serve to show how much of current economic thinking is divorced from reality.  Not just the present, but our politicians and economic leaders all seem to have forgotten the lessons learned from the economic and political troubles of the 1920s and 30s.  But once again there is little point in singling out Germany is this regard.  Bad though German economic thinking is, it is shared by almost all the other EU countries.  Even in the UK, our very own nasty coalition is mired to austerity.
If we are all to have a better future and get through these difficult times with the least possible suffering then we all need to work together to challenge the still dominant neo-liberal thinking which rules in all our capitals.  Petty minded, nationalistic blame games will only make this very difficult task even more difficult.  Greeks above all need to meet with and work with those Germans and others who disagree with current economic thinking and find a way to mount a serious political challenge to our current leaders.  Calling Germans names is not part of the solution.
Posted by Unknown at 15:41