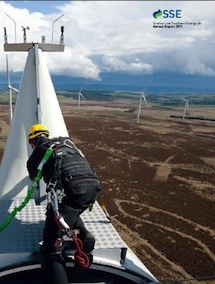 Unionists have been desperately trying to drum up scare stories about how the “uncertainty” caused by the prospect of a referendum on Independence for Scotland is jeopardising investment in Scotland.  The latest attempt to scare us all came last week with comments from SSE (Scottish and Southern Energy).  Their submission to the various consultations on offer were seized upon by the Unionist press with glee.  “Power Giant’s Blow to Salmond”, screamed the Daily Mail, while even the supposedly unbiased BBC reported that the submission was evidence of this jeopardy to investment.   Unfortunately for our Unionist friends it was no such thing.
The submission, which you can read in full here, talks at length about risk.  Their main concern it appears is regulation and the possibility of changes to the regulations.  As they put in their submission. “SSE has long acknowledged, most recently in its Annual Report 2011, that regulatory change and legislative change, of which the current proposals to reform the electricity market in Great Britain are an example, are among the principal risks it has to manage, and it has extensive experience of doing so.”  Notice that phrase at the end.  SSE itself is making it clear that SSE has extensive experience in managing this kind of risk.  So why all the fuss and bother?  Is there some kind of semi hidden political agenda behind SSE’s submission.
To return to the substance of their concern - the risk of regulatory change.  SSE, as a company that operates throughout the British and Irish Islands, wants a common regulatory framework to apply across the islands.  As they put it rather well, “SSE believes that the interconnection and integration of the electricity and gas systems and markets in Scotland and in England and Wales should continue regardless of the outcome of the referendum on Scotland’s future.  This means that there should continue to be a single energy market for the islands of Great Britain, just as there is a single electricity market for the island of Ireland.  Indeed, SSE supports further harmonisation of energy systems and markets to strengthen security of supply and achieve efficient use of energy resources for the benefit of customers.”   It seems a little surprising in the light of the above paragraph that SSE appears to be ignorant of the deliberations of the recent British-Irish Council meeting, where all the eight governments of these isles agreed:  “the All Islands Approach (AIA) vision of an approach to energy resources across the British Islands and Ireland which enables opportunities for commercial generation and transmission, facilitating the cost-effective exploitation of the renewable energy resources available, increasing integration of their markets and improving security of supply. The Council agreed a set of principles to underpin the vision, and launched a programme of joint work spanning the potential for renewable energy trading, as well as workstreams on interconnection and market integration.”  Furthermore, the Scottish Energy Minister Fergus Ewing welcomed SSE’s submission and added: "We agree with SSE that post-independence we should maintain a single Great Britain energy market, within an increasingly unified single EU market - that has been the policy position of the Scottish government for some time.”  Pity that SSE and the headline writers in the media had not done a bit of elementary research before writing anything.  Perhaps it is the UK government that is the most reticent about all this?   After all it was the UK government which just last year changed the rules regarding exploration in the North Sea.  Without any prior consultation.
Back to SSE and their submission.  Curious then that in the light of all the damaging headlines, SSE make it crystal clear that they have no intention of moving their HQ from Scotland.  Further, they go on to state loud and clear,  “Making investment decisions is about striking the right balance between risk and reward. The additional risk of regulatory and legislative change does not mean that SSE will not invest in projects in Scotland while its future is being determined. The development of SSE’s existing projects in Scotland will continue as planned.”  So, where exactly is this blow to Salmond?   There is some additional risk around, but SSE has extensive experience of managing these risks and anyway its existing projects in Scotland are to go ahead as planned.  If this is the best that Unionists can come up with the game’s a bogey.
Posted by Unknown at 13:09