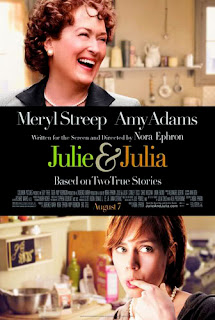 Last Monday afternoon in Zürich just about everything closed down for some kind of shooting competition for boys. Not sure what they were shooting – just hope it wasn’t other boys. Anyway, given the limited options we decided to go to the movies and the pick of the bunch appeared to be Julie and Julia. And a very good choice it turned out to be.

On the other hand Julia leads what most people would imagine is an almost idyllic life. With rich parents and a well off husband she can do pretty much what she wants. And in the film she is always shown in opulent surroundings. She does of course have to overcome a variety of prejudices against women making their own way in the world – an even more daunting challenge in the 40s and 50s than today.

Email ThisBlogThis!Share to TwitterShare to FacebookShare to Pinterest
Labels: Films, Julie and Julia