The Schnebelhorn is the highest point in the Zürich Oberland and indeed in the whole of Kanton Zürich. The Oberland area borders on St. Gallen Kanton and is a lovely hilly landscape full of woods and farmland. The Schnebelhorn is only 1292m high which is pretty insignificant in Swiss terms, but high enough to compete with the highest Munros in Scotland. With an ascent of some 620m and about a 7km hike to the top it is also a fair outing by Scottish standards.

The hike starts at the little village of Steg, which is only about one hour's drive away from Zürich. From the roadside you start climbing pretty steeply right away and after a short section through some trees you emerge to a more open, but still rising area. Here you pass by some wooden houses, all richly decorated with flowers, and plenty of apple trees. As we did the walk in mid September the trees were all laden with fruit and we happily availed ourselves of some tasty sustenance. 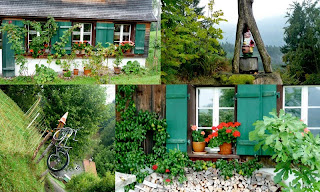 The walk continues in this mode, with some short but very steep sections followed by longer and more gentle but still rising sections. You even have to edge your way past grazing cows. 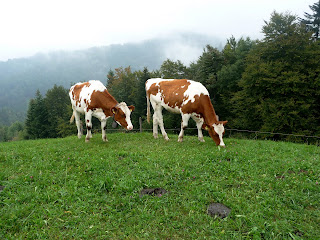 Most of the way though is through wooded areas which makes it most unlike a typical Scottish walk. The summit itself though is open and has great views of the Bodensee, Austria and the Alps. Unfortunately for us we had chosen a rather cloudy morning and got no views whatsoever. Here is Cosimo appearing through the mist just below the summit, followed by both of us on the summit itself. 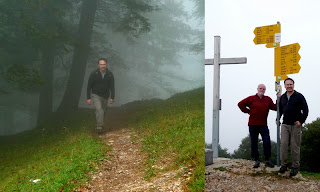 Luckily you can make the descent by a different route thus completing the horseshoe. Also luckily and again most unScottish there is a charming little inn just below the summit. This descent is very steep and rocky and the normally reliable Swiss markers got this one wrong as it took us quite a bit longer to manoeuvre our way down to the safety of the inn. Below is a view of the summit area with the inn in the foreground. 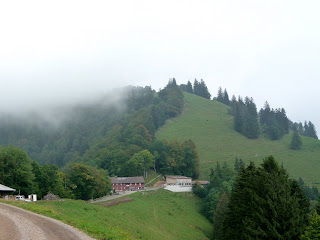 It was well worth the steep descent though as the inn was a most welcoming place. Very busy too and all the guests were very friendly and even the waitress was lively and friendly. The food and beer was very good too.

By now the sun had come out and the rest of the descent should have been relatively easy and straightforward. And yet. Faced with what looked like a shortcut – saving 15 minutes – we took this route. Big mistake. This section was really steep and almost straight down through a forested area. It seemed to go on for ever and ever. And all the time we could hear the ringing bells of cattle on some hillside. The sound of these bells can be quite pleasing, but not for hour after hour, particularly on a hard descent. 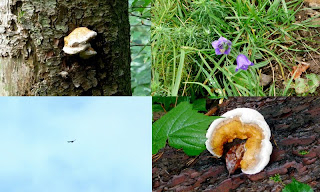 Still we emerged unscathed and were able to complete the walk along a more gentle path through open farmland. Throughout the walk we came across some lovely wild flowers and some unusual fungi growing on trees. We even caught a glimpse of a high flying bird of prey, but not sure what it was. Quite big though. All in all this was a fine outing. Including our R&R in the inn the whole walk took just over six hours. I definitely plan to get in more walking in the Zürich Oberland.
Posted by Unknown at 15:27