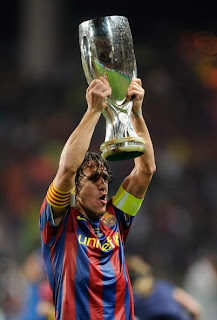 Late on Monday evening the final match of the first round of the Spanish League was completed, with FC Barcelona beating Sporting Gijón 3-0. Thus all the European leagues are now underway. Spain as usual is the last to get going, and as usual there is now a hiatus in the league programme as the final series of World Cup qualifying matches take place over the next two weeks. A crazy system!

Anyway the good news for Barça fans and lovers of good football everywhere, is that Barça won in a rather solid more than spectacular performance. The highlight of the match was Zlatan Ibrahimović scoring his first goal for Barça – a diving header to complete the 3-0 scoreline. So far most of the performances have not touched the highs of last season, but at least we are winning. Already two trophies have been won – the Spanish supercup and the European supercup. The Spanish one was won with a 5-1 aggregate victory over Athletic Bilbao, while the European supercup required an extra time winner. Barça dominated all three matches but found it difficult to convert chances into goals, especially against a well disciplined Shakhtar Donetsk defence. Still, two trophies is one more than Barça achieved in the 2006-2007 season the last time they won the Champions League. The Spanish supercup was their sole success in that season. So things are looking a bit better this time round.

As regards the team itself, not much has changed, despite the various comings and goings. Two of the new signings – Keirrison and Henrique - have, as expected gone out immediately on loan. The main additions to the squad have been in defence, with the arrival of Maxwell, from Inter Milan, a left back who should challenge Abidal for this spot. Indeed, Maxwell started the match against Sporting, and looked a good player, but had to be taken off due to injury. The other new defender is Dmitro Chygrynskiy, the Ukrainian international centre back who finally signed from Shakhtar Donetsk, immediately after the European Supercup final. Judging by his performance in that match he looks a very accomplished player and in a short time we could well see him partnering Gerard Piqué at the heart of Barça's defence. With Marquez, Puyol, Maxwell and the two youngsters, Marc Muniesa and Andreu Fontás, the defence is pretty well covered and definitely seems to be stronger than last season.

Up front the main change of course is the arrival of Zlatan Ibrahimović as the new striker in exchange for Samuel Eto'o. It will be very hard for Zlatan to emulate, let alone surpass Eto'o's scoring achievements with Barça. However, he is a very good player and has different strengths to Eto'o, physical presence and heading ability among others. He should do well. The first choice strike partnership of Zlatan, Henry and Messi still looks very, very good. The back up is much the same as last season and most of us will be praying that none of the above succumb to serious injuries as happened during the 2006-2007 season. The main back up will come from the youngsters, Bojan, only just turned 19, and Pedro Rodriguez, who scored the winner against Shakhtar. Both played intermittently last season, so both should be that bit stronger, wiser and more mature. Both played against Sporting, and both played very well, with Bojan scoring the first goal.

It is in midfield where the greatest concern lies. The defensive or holding midfielder role will again be shared by Yaya Touré and Sergi Busquets. So there should be no worries there. It is the attacking, creative roles that give cause for concern. Or, rather the lack of cover that is potentially worrying. The main creative players will again be Xavi and Iniesta, two marvellous players who ended last season playing some wonderful football. Iniesta picked up an injury at the end of last season and has yet to play this season, though he is due to play in Barça's next league match. However, if either or both were to be seriously injured, then there does not appear to be any real cover. Two of last season's back up players, Gudjohnsen and Hleb, have both left. While neither featured much last season, at least both were experienced players. Now the main cover is Keita,who is a very good player, but offers different qualities to either Xavi or Iniesta. The nearest to a Xavi type player seems to be the youngster Jonathan dos Santos, who is only 19 years old. He has yet to play a competitive match for the club, though from brief glimpses he does look a good player. However Guardiola will be praying that he only has to play Jonathan now and again to build up the youngster's confidence and first team experience.

All in all the season has started well. The team is playing well, though below their capacity. From the matches seen so far there is plenty of commitment among the players and the new arrivals will ensure that there is some real competition for first team places. Repeating any of last season's trophies will be very difficult never mind repeating the treble. No team has as yet retained the Champions League, so a real challenge is on there. In Spain a rejuvenated Real Madrid, with a new and highly rated coach and some fabulous new players will push Barça to the limit. However talented players alone do not win trophies, for this you need a team and commitment. If Pellegrini can create a balanced team out of Real's squad, then they will be hard to beat. But then Barça are also hard to beat. If the players show the same commitment as last season then Barça should do as well. Not necessarily in winning trophies, that is always to some extent in the lap of the Gods, but in playing wonderful, exciting football, which is all that we can ask for. Winning trophies is always a bonus. There should be some cracking matches in the Spanish league this season.