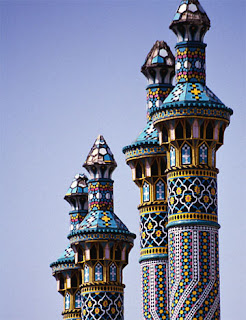 This should be a joke and sounds like it would make a very funny Monty Pythonesque sketch. It is alas no joke, especially not in Switzerland. There the two year old "stop minaret" movement is backed by the influential ultra-conservative Swiss People's Party (SVP). The campaign has gathered sufficient signatures to ensure that there will now be a referendum which if passed would amend the country’s Federal constitution to include a new article stating that, “The construction of minarets is prohibited”.
With a bit of luck the proposal will be defeated. The Swiss Council of Religions, which groups Jewish, Christian and Muslim leaders, has issued a statement rejecting the proposal. "For the members of a religious community, religious buildings are not only places to gather but also a symbol of their faith and an expression of their reverence for God. For many Muslims, therefore, mosques need to have minarets," the council stated in a 5-page declaration published on 2 September 2009. "Everyone has the right in this country to live their faith visibly, freely and in a community within the framework of the public order," it stated. "This also includes the construction of places of worship that are typical for their respective religion."

The Federal government has already opposed the demand and may try to prevent the referendum, citing reasons of national security and the impact on the country's international relations and interests.
This seemingly surreal piece of political theatre is of course just part and parcel of a wider, ongoing trend of anti muslim measures which have spread across Europe. As well as Switzerland, there have been controversies over mosque and minaret-building in Germany, Austria, Italy, and the Netherlands. While there seems to be an almost daily report of some dispute about muslim clothing, or at least clothing for muslim women. There is the touch of the unreal about this one, at least for people of my age. When I was younger the disputes were all about the shortness or sometimes even the lack of clothing worn by Western women. Nowadays it seems an amazing number of Western men are getting overexcited by muslim women wearing too much clothing. Seems women can’t win either way.

All these disputes are of course about power and the perceived threat to Europe from muslim immigration. At least the SVP in Switzerland are quite open about this. According to Ulrich Schüler, an SVP parliamentarian and leading member of the anti-minaret movement, minarets are political rather than religious. "They are symbols of a desire for power, of an Islam which wants to establish a legal and social order fundamentally contrary to the liberties guaranteed in our constitution," he said.

This idea that Europe is under threat from an Islamic takeover is becoming more and more mainstream. The German author Henryk M. Broder recently told the Dutch newspaper De Volkskrant (12 October) that young Europeans who love freedom, better emigrate. Europe as we know it will no longer exist 20 years from now. Europe apparently is turning Muslim. This article appeared under the title The rape of Europe.

This kind of emotive and essentially irrational headline is unfortunately all too common. It also features in the titles of numerous books on both sides of the Atlantic, where it seems that Americans are equally obsessed by muslim immigration into Europe. A quick glance at Amazon.com throws up such enlightening titles as:
It is not clear what has prompted such vitriolic hatred for what is by any standards a small and persecuted minority. In Europe as a whole muslims make up only around 3.5% of the total poplulation. Even in Switzerland muslims represent only about 4% of the population. It is also interesting to note that in Switzerland nearly all the muslims come from other parts of Europe – Turkey, Bosnia and Albania.
However when it comes to hatred and fear of the other, facts and rational thinking have rarely played any role. Europe and America can invade and occupy muslim countries and in the process kill and maim hundreds of thousands of muslim civilians, with apparent impunity. Yet the presence of a small number of muslims living peacefully in Europe generates in the minds of some Europeans apoplectic visions of imminent catastrophe. It is most ironic that it is in Europe, the continent of the Enlightenment, where enlightenment appears to be in such short supply
Posted by Unknown at 19:16