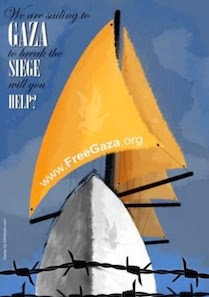 Now I freely confess that I am no expert on International Law and even less of an expert on the various laws that govern blockades and other naval engagements. What I want to point out is that whether the blockade is legal or not does not make that much of a difference. The implications for Israel are bad either way.

Therefore let us assume that the blockade on Gaza is, as Israel claims, legal under International Law. In making this claim Israel usually refers to the San Remo Manual on Armed Conflicts at Sea, which seems to be the bible on these matters. The key point here is that the use of a blockade is only allowable in the context of an International Armed Conflict - a state of war to you and me. So Israel can only claim that the blockade is legal if it is at war with Gaza. However Gaza is not a state. What this means, as I understand it, is that the legality of Israel’s blockade of Gaza seems to depend on its willingness to concede that it is occupying Gaza and is thus in an International Armed Conflict with Hamas. But Israel does not want to do that, because it would then be bound by the very restrictive rules of belligerent occupation in the Fourth Geneva Convention.

What would this mean for Israel? In the first place it would turn Hamas militants into ” privileged belligerents” and when captured must be treated as prisoners of war, something which Israel has never done. Secondly Israel would have to recognize its continued occupation of Gaza, something it has spent years trying to persuade us to forget. Thirdly the firing of rockets by Hamas at military targets would be legal and Hamas would be fully justified in not only fighting off Israeli incursions into Gaza but also in attacking Israeli forces wherever they are found. Fourthly Israeli soldiers would no longer be kidnapped, but legally open to capture.

But of course Israel has always strenuously denied that it is still occupying Gaza. Which makes its claim that the blockade is legal pretty much null and void. Which is the view taken by most international observers, at least those outwith Israel and the USA.

The point of all this is that it is way past time for Israel to be held to account for its actions. It just beggars belief that the UK and the rest of Europe continue to allow Israel to avoid meeting its legal obligations. If the blockade is deemed to be legal that Israel must be held responsible for the well-being of the inhabitants of Gaza and must treat any captives as prisoners of war and not terrorists. If the blockade is deemed to be illegal then Israel must stop it immediately. In either case if Israel refuses to comply with its international obligations then the UK and our partners in the EU should at the very least impose a diplomatic and commercial blockade on Israel, until it does comply with international law.

A brief note on why it is unlikely that the blockade is legal. First up Kevin Jon Heller of Melbourne Law School. He admits that if the conflict between Israel and Hamas is an international armed conflict (IAC), there is no question that Israel has the right to blockade Gaza. However he goes on question the validity of this claim and writes that, “it is difficult to argue that Israel is involved in an IAC with Hamas. First, it is obviously not in a traditional IAC, because Gaza is not a state. Second, not even Israel claims that the conflict has been internationalized by the involvement of another state. And third, although the Israeli Supreme Court held - controversially - in the Targeted Killings case that armed conflict between an occupying power and a rebel group is international, Israel’s official position is that it not currently occupying Gaza.” This comes from a piece entitled Why Is Israel’s Blockade of Gaza Legal? which first appeared in Opinio Juris an online forum for informed discussion and lively debate about international law and international relations. The full piece can be read here.

Another take on the legality issue comes from Associate Professor Ben Saul, Co-Director of the Sydney Centre for International Law at The University of Sydney. In an article for ABC he dismisses the legality of the blockade by pointing out that the San Remo Manual “prohibits a blockade if "the damage to the civilian population is, or may be expected to be, excessive in relation to the concrete and direct military advantage anticipated from the blockade". In the same article Ben Saul also makes the claim that the IDF may have committed crimes. He points out that, “if Israeli forces killed people, they may not only have infringed the human right to life, but they may also have committed serious international crimes. Under article 3 of the Rome Convention for the Suppression of Unlawful Acts against the Safety of Maritime Navigation of 1988, it is an international crime for any person to seize or exercise control over a ship by force, and also a crime to injure or kill any person in the process.” You can read the full article here.