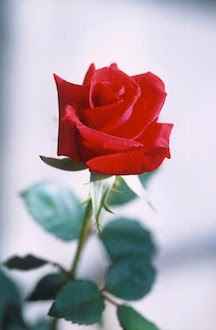 With the arrival of June we are definitely into summer. Though there is some disagreement as to when summer really does begin. For some people summer starts on 1st of June while for others summer only begins with the summer solstice. This should really be Midsummer, but unfortunately the weather is rarely that warm in Scotland and other northern countries in June. The warmest months tend to be July and August. So far June has not got off to a great start over here, with cloudy, rainy and quite cold days. We had Liam and Jamie at the adventure playground in Carnoustie the other day and after only a few minutes they wanted away - it was too cold! Ah, the youth of today are not as hardy as of yore. Allegedly. Anyway it was a good idea for it was pretty miserable with a cold wind coming off the estuary. We ended up inside the local library which was lovely and warm. And as an added bonus we met my sister, Pat who was there with one of her granddaughters, Erin. So it all turned out well.

Back to June, and no doubt due to the hard winter, everything is a bit later in blossoming in the garden. The tulips have all gone and only now are some of the summer flowers beginning to show. Though the poppies have yet to emerge we do have some lovely irises and cornflowers in bloom. And the patio and window boxes are full of summer plants just waiting to burst into full bloom. 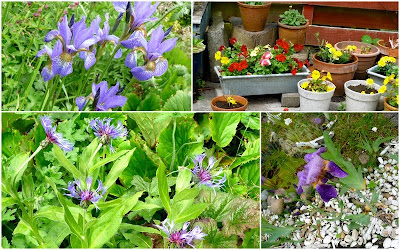 June is as already mentioned the month of the summer solstice, at least in the northern hemisphere. This year the solstice will be on the 21st. The celebration of the solstice goes back to pagan times. Nowadays there does not seem to be much made of the solstice. Though some people still like to turn up at one of the many pre-historic stone circle sites around the country. The most famous is at Stonehenge in southern England and every year a large gathering takes place there to celebrate the solstice.

For most people in Europe Midsummer is most likely to be associated with the feast of St. John the Baptist which is held on 24th June. This is still a popular time for parties and parades especially in Scandinavia and Spain and Portugal. In Scandinavian countries the celebrations usually take place on the evening of the Friday which falls between 19th and 26th June to ensure a long weekend of partying. In Spain where St. John - San Juan is the country’s patron saint the 24th is a public holiday. This means of course that the main events take place on the evening of the night before. As usual in Spain there are lots of bonfires and fireworks and the parties go on all through the night. 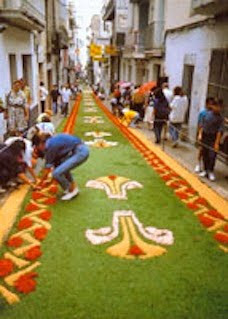 Corpus Christi is another Christian festival in June. It is mainly commemorated in Catholic countries and one of the most colourful celebrations takes place in Sitges. We always loved this time in early June when we lived there. The main streets of the town are turned into carpets of flowers. On the days preceding Corpus local groups draw in chalk intricate designs on the street surfaces. During the night and into the wee small hours they then fill in the designs with petals from hundreds and no doubt thousands of flowers, especially carnations. The local school usually participated and Emma and Elena have both been involved in helping out.

There does not seem to be much in the way of popular celebrations in Scotland in June. Nor do I remember any from my childhood. I guess that Midsummer festivals were too pagan in origin and too catholic in their joyous excesses for our rather dour Presbyterians of yore.

June is though a good month for sports fans. Tennis lovers have Wimbledon fortnight to look forward to. But of course this year the sports highlight, at least for soccer fans, will be the World Cup which kicked off yesterday in South Africa. This is the first time such a major world event has gone to an African country. From the previews it all looks very colourful and exciting - let’s hope the football lives up to all the expectation. As Scotland has once again missed out my three favourites are 1. Spain, 2. Argentina and 3. Brazil. That’s my wish list anyway.

For the Rutherfords, June has been a good month for weddings. So far I have only identified one death, that of my great great grandfather, David Rutherford who died in St. Andrews on 21st June 1896. My great great great grandfather, James Rutherford was born on 18th June 1796 on Easter Balady Estate, near Kinross. June was also the month of the birth of one of my oldest know ancestors, James’ father and my great great great great grandfather Robert Ferguson Rutherford. I don’t have a date for his birth but he was christened on 26th June 1764. A peculiarity of the weddings is that all four were on or around the summer solstice. David Cunningham and Lilias Dewar were married on 22nd June 1822 in Logie parish in North East Fife. They were my great great great grandparents, as their daughter Mary Cunningham who would go on to marry David Rutherford. The other three wedding were all on the 21st the day of the solstice itself. The above mentioned Robert Ferguson Rutherford married Margaret Tulloch in 1795 in Dunfermline and by chance the parents of David Cunningham were also married on the same day in the same year in Kinross. I do not alas have their names. The 21st is obviously a special day for Rutherfords, at least my branch of the family. For it was also the day on which I got married to my dear Kathleen - this was in Glasgow in 1969 so later this month it will be our 41st happy anniversary. Here is the wedding group from 1969. 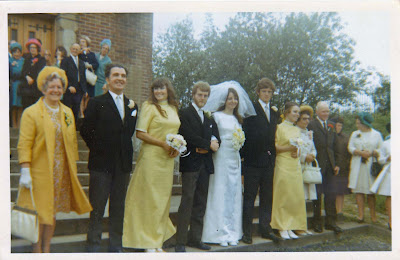 In most traditions the birthstone for June is the Pearl. This lovely gem symbolizes loyalty, faithfulness and friendship. It is also the gift to give on your 30th wedding anniversary, though I think we forgot all about this at the time.

The Rose at the beginning of this post represents the birth flower for June. The red rose, which is probably my favourite signifies love, passion, beauty, respect and romance. No doubt this derives from the Greeks and the Romans who thought the rose represented Aphrodite or Venus, the goddess of love. Some pagan cultures believed no undead creatures could cross the path of a wild rose. This seems to be the origin of the custom of putting a rose on the coffin of the recently deceased in order to prevent the rise of a vampire.

Email ThisBlogThis!Share to TwitterShare to FacebookShare to Pinterest
Labels: months