I have only managed to complete two new pieces over the past month or so.  The first was my first, and probably only, attempt to make a 15 sided biscornu.  As with the mini biscornu I did earlier the design came from Louison’s lovely site.  The biscornu is made up of 15 mini squares which are grouped into three different patterns.  Here are the finished squares before the final assembly. 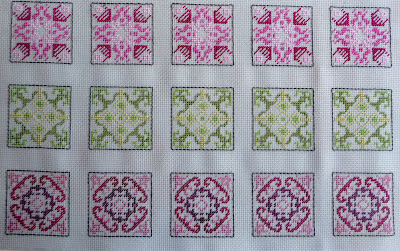 For the colour scheme I used a different colour wheel from the usual.  Instead of the common three primary colours this wheel has four primary colours - red, yellow, blue and green.  This wheel was developed by a German physiologist, Ewald Hering and he called them “psychological primaries”.  Apparently Leonardo da Vinci had also identified these four primary colours.  They make up two pairs of opposites:  red and green and blue and yellow.  Anyway I found it a useful tool and used it to help me work out the colour scheme for the biscornu.  I used shades of plum for one set, shades of red and mauve for the second and shades of lemony green for the contrast.
Anyway the stitching is pretty straightforward.  The difficulty begins with sewing the little squares together to make the biscornu.  The sewing is not complicated, but I found it almost impossible to get the tension right at the corners where five squares come together.  The result is a bit untidy.  Still I persevered and then had the problem of stuffing the bloody thing!  I use a polyester fibre and again I found it impossible to get the filling into each corner.  Nevertheless I did finally complete the darned thing.  Below is the finished biscornu. 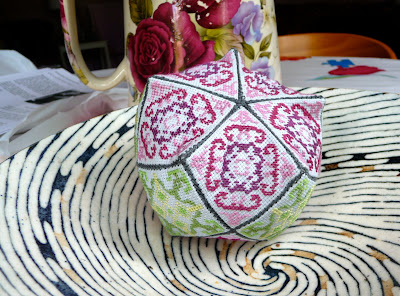 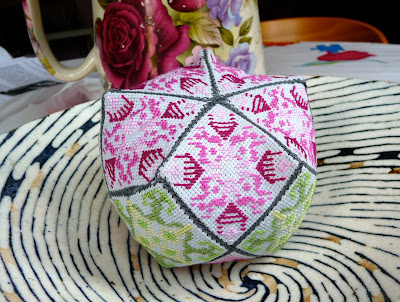 Though the finishing was very tiresome, I am glad I ventured to complete this type of biscornu, though I don’t think I will do it again.  Regular and mini biscornus are fine and I will return to them again.  If you want to try one yourself, visit Louison’s site for inspiration.
The other project I completed was this very simple piece which only used vertical stitches of varying lengths.  I even managed to put this in a frame. 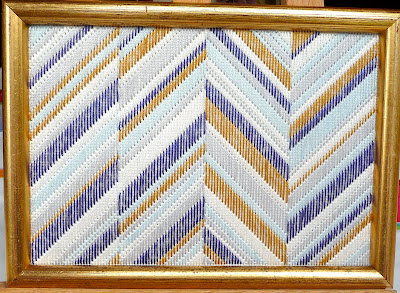 The idea behind this piece is somewhat interesting.  During our recent holiday in Berlin we visited various museums and one of our favourites was the Kunstgewerbe Museum or Museum of Decorative Arts.  This houses a wonderful collection of artefacts from the Renaissance to the present.  The modern section included some lovely tea and coffee sets.  I don’t know if you are allowed to take photos or not, but I did manage to furtively take a few.  Including this rather attractive coffee set by some American designer I believe.  I don’t have any details unfortunately. 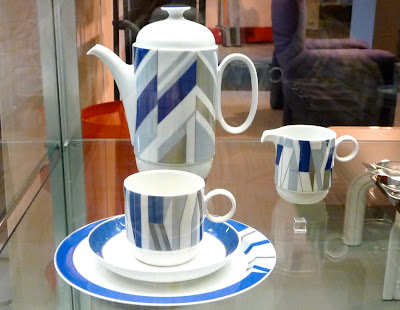 Anyway I liked the pattern so much that I decided to use it as the basis for a stitching piece.  I kept more or less to the original colours, with the addition of another shade of blue.  I rather like the simplicity of the completed work.
I am currently in the early stages of another in my series of Five Easy Pieces.  These use Bargello patterns.  This one has a circle as the centrepiece.  Here is what it looks like just now. 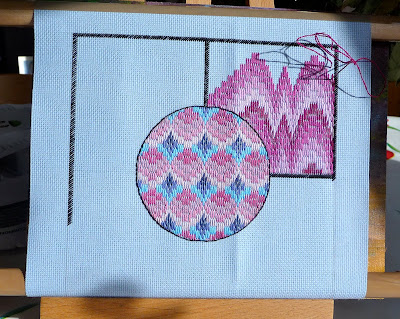 As well as stitching I have been busy with a couple of other artistic ventures.  The first involved putting together bits and pieces to make two little compositions which brighten up the outside of our front door.  Made up of pieces from my driftwood collection, some pebbles and shells from the beach in the Ferry, and some old lanterns. 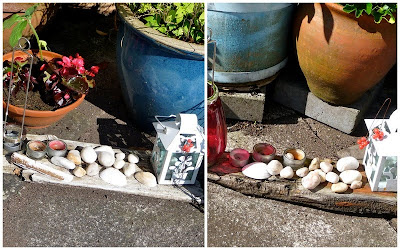