The Treachery of the Liberal Democrats 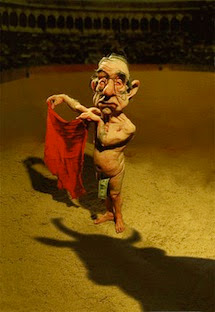 The lunatics are back in charge of the economy - and with a vengeance. The recent government reports on the state of the economy and the public finances are all meant to frighten us into accepting severe, if not savage cuts in public spending. This of course was the Tory message throughout the election campaign and on the back of this they won a measly 36% of the votes. Both Labour and the Liberal Democrats argued against immediate cuts due to the fragility of the economy and together they won well over half the votes in the election. Despite this the LibDems have decided to join with the Tories in a coalition government. And in so doing they have betrayed their voters.

How can the likes of Clegg, Cable et al argue so convincingly against the Tory proposals and now so convincingly argue for them? What has happened to that so-called LibDem principle of trust? Vote for us LibDems - we are different, you can trust us. Turns out they are just as conniving as the rest. They either have no principles whatsoever or they were lying during the campaign. Probably both. After all what have the LibDems got out of the coalition? A promise to hold a vote in Parliament which may, just may, result in a referendum on the Alternative Vote, which is not even remotely proportional. Oh how cheaply and quickly did the LibDems sell out.

Unfortunately it will be us, or at least the less well off among us, who will have to pay the price for this treachery. In terms of reductions in income, pensions and the loss of important services. For many of us, our quality of life will be seriously affected for the worse. And all so the LibDems can enter government to prop up a Tory party that was rejected by over 60% of the electorate!

The coalition government’s economic prescription is complete and utter madness. In the midst of the deepest recession in generations they are going to make deep cuts in public spending. How on earth is that going to help the economy grow or even maintain its current level? As Larry Elliot points out in a Guardian article: “Just as in 1937, private demand in most advanced countries is too weak to sustain the recovery. Budget deficits are a reflection of high unemployment and low levels of private investment. Consumers are worried about losing their jobs and are having their incomes squeezed. That makes businesses anxious about investing.” And yet we are to believe that by making even more people unemployed and taking even more spending out of the economy the private sector is somehow going to start investing! Pigs no doubt will soon begin to fly over Westminster.

The coalition often refer to the Canadian experience of the mid 1990s as an example of how savage cuts to public spending can work to the benefit of a country. What this superficial comparison fails to mentions is that the Canadian economy was only able to grow and thus take up the slack from reduced government spending, thanks to a sharp devaluation and a boom in the US economy. Canada also experienced a sharp rise in private debt during this period. Now none, absolutely none of this applies to the UK in 2010. We have already devalued, but alas, with the fall in the Euro this is not likely to benefit us much more. Secondly our major trading partners - the EU and the USA - are also in sharp decline. To quote Larry Elliot again: “we now have the bizarre spectacle of China, Japan, the eurozone and Britain all set on reducing budget deficits while simultaneously pursuing export-led growth. This is a logical absurdity because somebody, somewhere has to be importing all the exports. If the rest of the world assumes that the US is once again going to become the world's spender of last resort it is seriously mistaken.” And with household debt at record levels is this really the time to be asking people to take on more debt? Truly this prescription is madness.

The government again and again intone that we must make these cuts or the markets will punish us. This claim has been much used by LidDems to justify their change of heart re the need for cuts. However this claim is pure nonsense and completely belied by what has actually happened to countries that have made savage cuts. Spain finally did announce a package of cuts and what happened? The next day one of the three major ratings agency downgraded Spain’s debts. So the response of the markets was to punish Spain for its budget cuts. The reason - this would reduce growth in the economy and make the repayment of debts more difficult. Clearly our coalition does not listen to the markets.

To return to the LibDems, the kind of economic policy pursued by the coalition is what one would expect from a Tory government. They argued for this during the election. However the LibDems did not, so why are they now so enthusiastically advocating this nonsensical and disastrous policy? One can only conclude that the LidDems under their current leadership - Clegg, Laws and Cable - are reverting back to a classic LIberal Party of yore. They seem all too willing to jettison their more recent social democratic inheritance. Only this can explain their all too willing acceptance of the neo-liberal agenda. Will this treachery spell the end of the LibDems? Time will tell, but if the economy does not make an improbable recovery soon, things are likely to turn nasty for the LibDems.

If you want to read a bit more about the lunacy behind the coalition’s economic proposals here are a couple of suggestions for further reading. Larry Elliot’s piece for the Guardian can be found here. Paul Krugman has written two interesting pieces for the New York Times. The first explains the bad logic of fiscal austerity and the other looks at real market response to austerity measures. And to end, a post by another Dundee blogger which punctures the myth of private sector jobs replacing public sector jobs, at least in Dundee. You can read that post here.

Email ThisBlogThis!Share to TwitterShare to FacebookShare to Pinterest
Labels: economy