Scotland is already in the European Union!

One of the recurring arguments made against Scottish Independence is that an Independent Scotland would have to reapply for membership of the EU.   Now I have always found this a very strange argument as it seems to ignore the fact that Scotland is already part of the EU, and has been ever since the UK joined way back in 1973.  So I have always been rather confused as to why Scotland would have to apply to join the EU when we are already in! 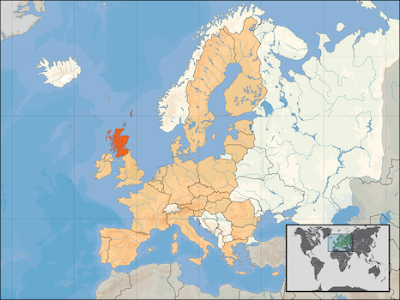 In this regard it is important to note a couple of legal points,  The first is that there is no procedure whereby the EU can expel a member state, or a part of a member state.  The existing treaties do not allow for this under any circumstances.  The second important point is that all residents in Scotland have certain rights as EU citizens.  These include the free movement of people, goods, services and money.    The European Central Bank has recently published a paper on Withdrawal and Expulsion from the EU and EMU. This paper outlines the current legal position and includes this summary of the current position - ‘participation in the European Union gives rise to a wide web of rights and obligations to citizens, companies and governments. To erase all those obligations at a stroke by expelling the member state would create huge confusion and penalise ordinary citizens.”
So Scotland is already in the EU and there is no mechanism for expelling anyone from the EU.  What would change though is Scotland’s status within the EU.  The Scottish government would negotiate with the EU to change its status from a region of a member state to one of a full member state in its own right.  Now it is clear that this has never happened before.  This will be a new experience for the EU.  But to suggest that the EU, including the current member states would somehow block this change in Scotland’s status is very much clutching at straws.  On what grounds would they do so?
Another important aspect which Unionists fail to realize is that is Scottish Independence would alter the status of what remained of the UK, RUK for short.   The RUK would need to negotiate with its partners on a whole range of matters, from the size of the RUK’s delegation to the EU parliament, the votes that the RUK would have in the Council of Ministers to the financial contribution that the RUK would have to make to the EU.  This latter point is of great importance.  It includes the much vaunted UK rebate which may become subject to review.  In any case member states currently finance the EU via three main sources.  1.  Customs duties on imports from outside the EU;  2.  A standard percentage on the harmonised VAT base;  3.  A standard percentage of the Gross National Income (GNI).  See here for details.  If Scotland is denied membership, then the EU loses all of Scotland’s financial contributions.  Not something I would imagine the other member states would want.  This will also be a great incentive for the RUK to get Scotland recognized as a full member state.  For if Scotland cannot be expelled from the EU, yet is denied full member state status, then the RUK would probably be obliged to continue to contribute as before, but without Scotland’s money.  Would the RUK dare to use its veto?
Independence for Scotland and the parallel creation of a new RUK state will change things in the EU, but from within the EU.  Talk of reapplying seems to me misguided.  So why do the Unionist bang on so much about this?  Same old scare tactics I guess.    Of course one way to sort this out once and for all would be for the Scottish and UK governments to start now negotiating the details of Scottish Independence, including the status of both Scotland and RUK in the EU.  This would remove most of the uncertainties around the whole independence debate, and would enable Scots to make an informed choice come the referendum.  I have already argued for this here.
Posted by Unknown at 14:26