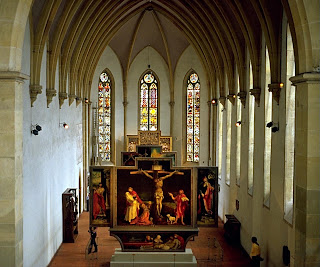 During our recent trip to Alsace, we were able to see the Isenheim Altarpiece. This turned out to be one of the highlights of our whole holiday and only came about by chance. Before leaving I casually mentioned to John, my friend and walking buddy, that I was planning to spend a weekend in Alsace and that we would probably stay in Colmar. Upon which news he immediately pressed me to visit the Isenheim Altarpiece which is to be found there. Apparently the altarpiece is renowned as one of the great masterpieces of all times. I of course had never heard of the altarpiece, though I am keenly interested in art. Anyway armed with this recommendation we did make the visit and it is undoubtedly well worth a visit.

The altarpiece is now housed in the Unterlinden Museum in Colmar in what was formerly a 13th century Dominican religious sisters' convent. The Museum features a fine collection of medieval and early Renaissance religious art, but the centrepiece is undoubtedly the Isenheim Altarpiece. We only had a short time for the visit, but were really only interested in the altarpiece. Unfortunately we arrived just behind a large group of tourists who had descended from a large coach and were queuing up for the audio guides. As we would have had to wait some time to get one of the audio guides we decided to do without. A big mistake. There is not a lot of written information available on the walls or in each room, so we missed out hearing about the background to the piece and about the details of the composition.

A little research however has since established that the altarpiece was painted by the German artist Matthias Grünewald sometime between 1512 and 1515. It was originally made for the hospital chapel of the Monastery of St. Anthony in Isenheim a village near Colmar. The hospital was a lazar-house which meant they treated people with infectious skin diseases. The altarpiece as originally built was a very complicated structure. It had two sets of folding wings which opened out to reveal a final, third altarpiece which consists of three carved wooden statues of saints flanked by two painted panels. It also had two painted side panels and a painted base. Now that it is a museum piece the various folding parts have been dismantled and now hang on their own.

In the museum you are not allowed to take photos using flash. I tried with my little digital camera, but it used the flash mechanism and I was immediately told off by an observant attendant. The pictures here are courtesy of Wikipedia. If you click on the photos you can get a larger view.

Once inside the Museum it took us a bit of time to find the Isenheim altarpiece. Despite arrows showing the way we found ourselves in rooms showing other religious works from the same period. Some wonderful stuff, including paintings by Lucas Cranach and Hans Holbein. However we had little time to dally and strode onwards until we did finally find the main hall with the altarpiece. The photo at the beginning gives an overview of the room. No photo though, can convey the feeling of wonderment and awe at first seeing the depiction of the crucifixion. The paintings are huge with what appears to be larger than life sized people. The overwhelming image is of darkness, with the predominantly black background only emphasized by the red cloaks of the other characters - the Madonna being comforted by John the Apostle, Mary Magdalene and John the Baptist. Christ is shown somewhat bloodied, all twisted and in obvious pain. This central piece is flanked by paintings of St Anthony and St Sebastian. This group of panels formed the first, or closed view of the altarpiece. 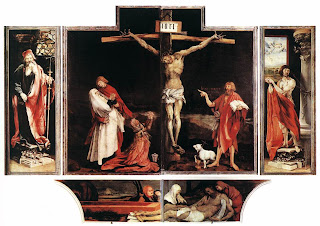 When the central panel wings were opened the second view was revealed. In contrast to the first view the paintings here are all light and bright colours. They show three scenes of celebration - the Annunciation, the Angel Concert for Madonna and Child and the Resurrection. In the museum the panels are not shown as in the original. Presumably for reasons of space the two outer panels are show together hanging separately from the two central panels. 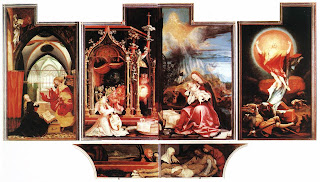 The final altarpiece revealed when the central panels were opened, consists of the wood carvings by Niklas Hagenauer, which are now flanked by Grünewald’s painted panels of The Hermit Saints Anthony and Paul in the desert and the Temptation of St Anthony. 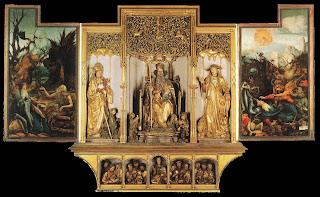 All the paintings are wonderful, but the initial crucifixion scene is undoubtedly the most powerful. This image of a suffering Christ must have made an enormous impression on the true believers. Even in this agnostic or atheistic age it is still an awe inspiring vision. As I mentioned at the beginning we only had a brief time to explore the museum. The whole collection is worth visiting and I am very keen to return to spend more time contemplating Grünewald’s visions. Alsace of course is a delightful region and well worth visiting in any case. Lovely scenery, good food, good wine all put into perspective by the sufferings depicted on the Isenheim Altarpiece. How could anyone resist?