Will the Lisbon Treaty finally make it? 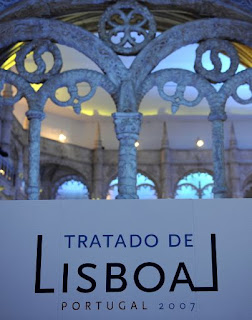 Now that the Irish have voted yes in their second referendum, it looks like the Lisbon Treaty will finally come into force. The Poles and the Czechs have still to ratify the Treaty and there may be a hiccup or two with the Czech ratification. Still, the new Treaty should complete its full ratification by all the member states and come into force before the next general election in the UK. Which means that the (expected) incoming Tory government will not be able to stop the Treaty. What has all the fuss been about?

Particularly in the UK there has been an enormous amount of hostility to the Lisbon Treaty. Which is most surprising, given the relatively minor changes it makes to the way the EU works. I know that it was originally supposed to be a constitution and for some reason the very word constitution caused some people to turn apoplectic and loose all reason. The revised Treaty does retain much that was in the previous constitution, but what terrible things are now in store for us?

A look at the main changes proposed in the Lisbon Treaty show further, but relatively minor steps towards making the EU function better and become a little bit more democratic. What’s all the fuss about?

The European Parliament will gain some powers as a result of the Lisbon Treaty. In future most decisions will be require the full approval of the Parliament. This co-decision process will become the norm and will include energy, asylum,immigration and the full EU budget. The Parliament will also in future elect the President of the Commission.

There are no new exclusive competences given to the EU. This means that Unanimity will continue to be required in areas including tax, foreign policy, defence and social security.

There are some institutional changes that for some reason seem to have generated a great deal of passion and rage. The Treaty provides that the present functions of the High Representative for Common Foreign and Security Policy and the European Commissioner for external relations will be merged together. This person will be appointed by the European Council. He/she will be a member of the Commission. A new External Action Service will be set up to support the High Representative. All this has caused many people to become fearful about a common foreign and defence policy for the EU. The problem is that we already have a common foreign and defence policy. The trouble is that it is subject to unanimity. Which means that each member state can continue to follow its own course in foreign and defence matters. The changes should mean better co-ordination and sharing of plans and when there is unanimous agreement the policy can be better implemented. But despite the changes in personnel there is no change in substance here.

This is also pretty much the case in relation to the other big institutional change - the creation of the post of President of the European Council. He or she will be appointed by the European Council for a two and a half years term, which is renewable once. The President will chair and co-ordinate the work of the Council. This should provide greater continuity and stability to the work of the European Council. It is important to note that the European Council is not the same as the Council of Ministers, which is where the main decisions are taken. The European Council is where the Prime Ministers and Presidents of the member states meet to provide overall political direction to the EU. At present the task of chairing and co-ordinating this work changes every six months. Thus momentum can be lost and continuity and accountability can be difficult to maintain. The new post should help overcome this. The new President will not of course have any powers in his or her own right. The final decisions will as at present continue to remain with the national governments of the member states.

So, once again, what is all the fuss about? As someone who supports the European Union and sees the Lisbon Treaty as a minor step forward to better decision making it is difficult to understand the hostility. The EU has changed from a relatively small and informal group of states who took decisions on unanimity to the current Union with 27 member states where Qualified Majority Voting is the norm. But all the key decisions about this development took place in the early 1980s with the active support of the then Tory government led by Margaret Thatcher. The key change came with the Single European Act which was pushed through the UK Parliament by Thatcher. And ever since large segments of the Tory party has regretted it bitterly. Still not sure why. But I never have understood the Tory party anyway.

Pending the decision of the Czech courts and government we may see the Lisbon Treaty come into force. The one really, really big downside to all this is that we may have put up with Tony Blair as the first President of the European Council for five years. Ah well, you can’t have everything.