During our last visit to see Emma in Zürich we managed to fit in a weekend trip to Alsace. One of the many attractions of living in Zürich is that you can access so many other places easily. Our journey to Alsace only took us three hours by car. The most difficult part was getting through Basel, but once in France the journey was very pleasant. We left on Friday, early in the afternoon and our first destination was Turckheim. This charming little town is very near to Colmar and lies in the foothills of the Vosges mountains. Turckhiem is one of the many Alsace towns famous for its wines. Riesling, Pinot Gris and above all, our favourite, the Gewürztraminer. There are some fine wine shops in the town and we availed ourselves of this opportunity to buy some bottles of the devine stuff. Turckheim is also known as one of France’s villes fleuries and it is certainly deserving of this honour. We had time to wander around the old streets, admiring the buildings and their decorations. As it was by now late afternoon, there was not much open in the way of cafes, but we did find one delightful little place, the Salon de Thé, where we partook of coffee and delicious cakes. 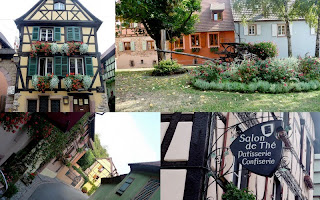 Our destination was Strasbourg, where we stayed for both nights. Strasbourg is the capital of Alsace and home to various European institutions, including the Council of Europe and for one week each month, the European Parliament. These buildings are all situated on the outskirts of the city and are all examples of modern glass and steel architecture. Happily this was not the reason for our visit to Strasbourg. The main reason for visiting the city is to wander about the old town which is surrounded by rivers and canals. On the Friday evening we only had time to see some of the central squares including the cathedral which was all lit up by the time we strolled past. 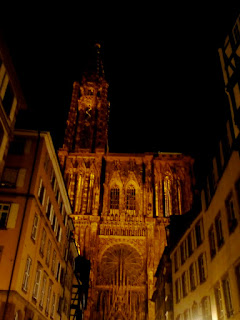 The city was very busy and we had difficulty finding a restaurant in the old town with spaces for us all. Eventually we ended up in a traditional Alsace restaurant and made our first acquaintance with the celebrated Strasbourg hospitality or rather, the lack of it. The food and the wine were very good and the restaurant itself very pleasant, However the one waitress was none too concerned about her customers. No welcoming gestures and a distinct reluctance to speed up the service. The first course took so long to arrive that while waiting we asked for some bread for Alessio. Well the bread did come, but we were more or less scolded for the temerity of eating bread before the first course! Still the main course was simple but very tasty - traditional sausages with potatoes.

The Saturday morning we spent mainly wandering along the banks of the canals in the Petite France area of Strasbourg. This is a enchanting area, full of traditional half timbered buildings. 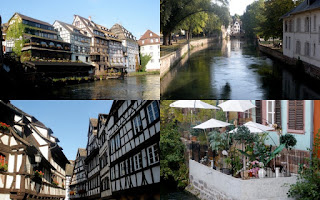 It must have been a working area once upon a time, full of barges and merchants. Nowadays it is full of shops and restaurants and visiting tourists. The origin of the name Petite-France refers back to a darker side of Strasbourg and France. According to Wikepedia, the name was conferred by the former German inhabitants not for architectonical reasons, but because of the numerous prostitutes working there in the MIddle Ages— prostitution used to be known in Germany as "the French business". Also, syphillis often contracted in that specific area was then known as Franzosenkrankheit ("French disease"). Despite this Petite France is well worth a visit.

We then wandered through the old town and had a picnic lunch by the canal. After this we found a lovely old square, the Place du Marché Gayot, near the cathedral, traffic free and completely enclosed by buildings. It is now full of cafes and restaurants and has an arty, bohemian look and feel to it. We took the opportunity for a little liquid refreshment, while Alessio ran about. A curiosity of the cafés in the square - they did not sell food, but you were welcome to bring and eat your own. 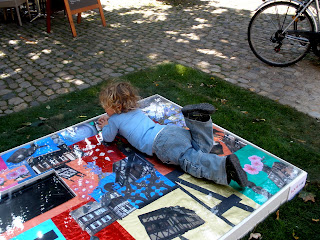 As the morning was mainly for the adults in the party, it was Alessio’s turn to be entertained in the afternoon. For this we went to the Orangerie Park, which is adjacent to the European institution buildings. The Orangerie is a very large and beautiful park, with lovely flower beds and most importantly, lots of space for Alessio to run around. It also has a little zoo with very pretty flamingos and some strange looking members of the ape family. There is also a very tiny farm area with the usual farm animals - cows, pigs, donkeys, chickens etc. It also boasts what must be about the most dilapidated tractor in the world. I hope this is not a tribute to European technology! 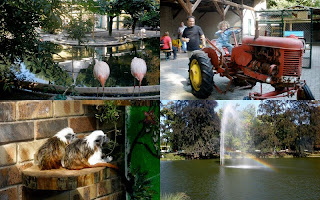 In the evening we returned to Petite France for another encounter with Strasbourg hospitality. This time the restaurant was busy, but again the waiters and waitresses were in no hurry to serve or even to acknowledge your presence. Charm seemed to have by passed the premises. Once again the food was delicious. We all had different versions of the famed tarte flambée, which is not a million miles away from a pizza.

On the Sunday morning we left the hotel quite early to head for Colmar and what was to be the highlight of the visit, at least for Kathleen and I. Colmar is about half way between Strasbourg and Basel and is a substantial town with a population of around 67,000. We started our visit on the outskirts of the old town, where we found a café that was mainly frequented by locals. It was another of those establishments where they did not serve food, not even croissants. Luckily there was a bakery close by. Unfortunately they had just run out of fresh croissants, so we had to make do with other delicacies. We then set off to wander around the old town. This central area is typical of Alsace with its half timbered buildings and wonderful displays of flowers. 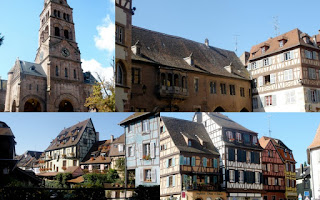 Colmar is known as the capital of Alsace wine and certainly boasts a large number of fine wine shops, some of which we managed to explore. Our main reason for stopping off in Colmar though was to see the Isenheim Altarpiece. This is a magnificent example of late medieval/early renaissance art and is the opus magnus of Matthias Grünewald and it is well worth a visit to Colmar just to see this masterpiece. I intend to write a piece just on the Altarpiece.

After Colmar we headed for Munster, which despite its Irish name, is another of these charming villages which lie in the foothills of the Vosges. Luckily for us the village was in the midst of an end of summer festival - la fête de la transhumance et du munster. Around the main squares there were displays of local produce, including several live animals. There were also children’s entertainments, which kept Alessio amused for some time. While there we had a little picnic on the steps of the church and later on partook of the local beer - jolly good too - at one of the local hostelries. 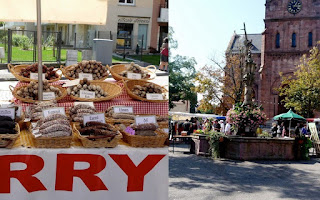 Before heading for Basel and Switzerland again, we made a short detour to visit Alison, one of Emma’s friends who lives with her family on the outskirts of the little village of Hirsingue. This is just south of Mulhouse and though it is still in Alsace, geographically it has more in common with the Jura region. Alison has a lovely house with an outdoor swimming pool and two horses. We were made very welcome and after tea and cake we sat outside enjoying the late afternoon sunshine. The highlight of this part of the trip was undoubtedly Kathleen stroking and feeding a horse for the first time in her life. Just proves that you are indeed never too old to learn. Thanks to Alison and her family for such a lovely welcome. 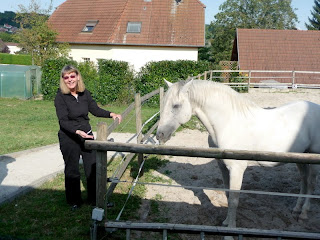 Not long after we were back in Switzerland, en route for Zürich. Thus ending a really good weekend. We just managed to get a brief glimpse of Alsace, but it looks a very beautiful and interesting place. Well worth a return visit.

Email ThisBlogThis!Share to TwitterShare to FacebookShare to Pinterest
Labels: Alsace