Slasher Cameron and the Long Knives 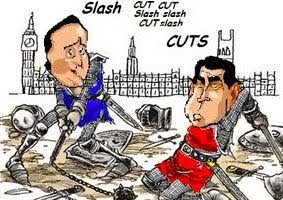 It seems that consensus has broken out at Westminster, at least among the three main UK parties. Judging by the sounds from their recent party conferences we are all in for a prolonged bout of cuts in public spending. The three leaders all seem to by vying to win the contest for the most savage cutter in town. All this of course is economic madness as any half decent economist could testify. Indeed as could anyone with even a half a brain of common sense. In the midst of a recession, with unemployment rising our leaders have determined that the way forward is to increase unemployment and further decrease in demand. Really clever those chaps, what!

The reason given is our national debt, which is apparently quite high and due to become higher in the coming years and is projected to reach 76% or more of GDP. According to Cameron and Osborne a national debt at 75% of GDP makes a country "bust." Strange then, that while the UK was acquiring the largest the empire the world has ever seen and started the industrial revolutions it was apparently “bust”, with a national debt always above 80% of GDP. At times in the “great” Victorian age the debt even touched 200%! All without the collapse of either the economy or the country. Perhaps the large debt had something to do with our economic success? Even in international terms our current position is not, pace Cameron and Osborne, particularly worrying. According to the International Monetary Fund, in 2008 - before the recession had kicked in - Japan's debt was 198% of national GDP, Italy's was 104%, Germany's was 76%, France's was 65%, the US's was 61%, and the UK's was 43%. All countries have rapidly increased borrowing during this recession. While the UK may have borrowed more, this would only move the UK towards the middle of the ranking of western industrialised countries.

It is clear that there is no economic reason for cutting public spending, even right wing commentators such as Sam Brittan acknowledge this. So why are all our major UK parties lining up for slasher of the year award - curtesy of the Mail and the Sun? The answer is to further their political agenda - the further advance and consolidation of neo-liberalism as the dominant ideology in the UK. This is a process that has been going on for decades, even before the rise of Reagan and Thatcher. This current recession is seen by the advocates of neo-liberalism as an ideal opportunity to push forward their favourite policies - weakening the welfare state, restraining trade unions, privatisation etc. The purpose of all this is to cut the share of national wealth going to working people and corespondingly make life easier for the rich and the really rich. The only future for the UK as foreseen by the Tories, Lib-Dems and New Labour is as a low wage economy servicing the richer world. Of course the City of London and the financial sector will be protected in this scheme and there will be rich profits for private companies as working people scramble for any kind of job they can get, however low paid or insecure it may be.

Given that New Labour sold out decades ago and the Tories and LIb-Dems are only reverting to type, the only surprise in all this is the pathetic response of our mainstream media. Once again there is very little in the way of regular and consistent challenge to the neo-liberal junk that passes, usually without comment, as the only way forward. Almost every political and economic forum in the media takes for granted that the UK is in a mess and that the level of national debt is intolerable and unsustainable. The only question is how much the public services need to be cut and how quickly. There is hardly any TV or radio programmes or newspapers that consistently offer an alternative. Even though the alternative is supported by the economic evidence from the past. Just how corrupt is our media?